Planets return to visibility, total lunar eclipse in May

The recent drought for planetary observing ends in May now that the planets are far enough away from the Sun to be safely visible. Our Moon, however, will still figure prominently in this month’s action.
Apr 29, 2021 11:10 AM By: Richard Corbet 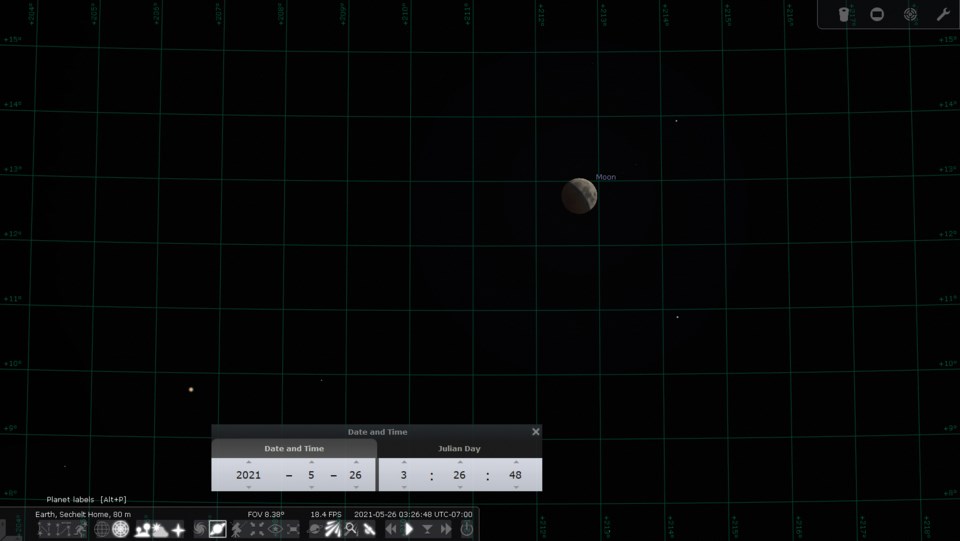 An image of what the May lunar eclipse should look like assuming the weather holds. The moon is about halfway in to the umbra (total shadow) and the star below and left is Antares, the bright one in Scorpio.Stellarium screenshot

The recent drought for planetary observing ends in May now that the planets are far enough away from the Sun to be safely visible. Our Moon, however, will still figure prominently in this month’s action.

By May 1, Mercury and Venus will begin to be visible in the WNW just after sunset – around 2100. Binoculars will help pick them out. A waning crescent moon will pass right to left about 5 degrees below Saturn and Jupiter, respectively, about 0500 the mornings from May 3 to 5 in the SE before sunrise.

We may be able to see some of the Eta Aquarid meteor stream in the early hours of May 6. It’s a medium busy meteor stream; the Zenithal Hourly Rate (ZHR) is predicted to be 60 meteors per hour, which is middling to good. The peak is predicted to happen about 1900 on the 5th though, when we’re facing backwards along our orbital path. So we’ll have to rotate about another six hours until the radiant point comes above the horizon and we’ll be headed into the stream by about 0100 on the 6th. The radiant is low in the SE and a few degrees left and above Jupiter and is simply the point from which all the meteors appear to originate. They can and will appear anywhere in the sky.

The very thin crescent New Moon passes about 1 degree to the left of Venus on the 12th and Mercury on the 13th. On May 15th the Moon passes just above Mars. Late on the 16th, Mercury reaches its greatest eastern elongation (22 degrees) from the Sun and starts to swing back around in front of the Sun. By the 23rd, Mercury will be a thin crescent and fading rapidly in the evening dusk as it comes around to pass in front of the Sun. Venus, however, is continuing to circle eastwards on the far side of the Sun. On May 28 the two inner planets will have a close conjunction – 0.4 degrees – just after sunset. All of this Mercury-Venus action will happen just after sunset in the NW and less than 10 degrees – one fist width at arms length – above the horizon. Davis Bay should be the perfect viewing location.

Before sunrise on May 21 all four of Jupiter’s big moons will be east of the planet; from left to right: Callisto, Europa, Ganymede and Io. This doesn’t happen all that often – once or twice a month at most. A steady pair of binocs will show them if you don’t have a telescope

May 25/26 is when we get the drum roll and cymbals. The Moon is at its closest perigee of the year about 2100 on the 25th, nine hours before the biggest full Moon of the year. Tide ranges will be very large, of course, but this full Moon will be unusual; at about 0112 on the 26th, the lower left edge of this nice big Moon enters the penumbral cone of Earth’s shadow. By about 0245, it begins to enter the umbral cone where Earth’s shadow completely blocks the Sun. It’s halfway in by 0322 and fully shadowed at 0412 – a total lunar eclipse! Fourteen minutes later, at 0426, the top edge of the Moon begins to leave the umbra and almost clears it before it sets at 0527. Binoculars will be ideal for this eclipse – the eclipsed moon can sometimes be very faint and hard to find if you’re not looking in the right place.

At 7 p.m., May 14, the Sunshine Coast Astronomy Club will hold its monthly Zoom meeting online to present Dr. Ray Kostaschuk, whose topic will be “Rivers of the Solar System,” taken from the Astrogeomorphology theme that he is currently presenting as a four-week class at Elder College. Details and sign-on info will be available at: sunshinecoastastronomy.wordpress.com