Docking at Phnom Penh along the Mekong, we climb a long stairway to waiting tuk tuks. These motorbike-rickshaws take us along boulevard parkways dotted with statues of Asian luminaries and jungle wildlife.
Jan 12, 2020 6:00 AM By: Rick Millikan 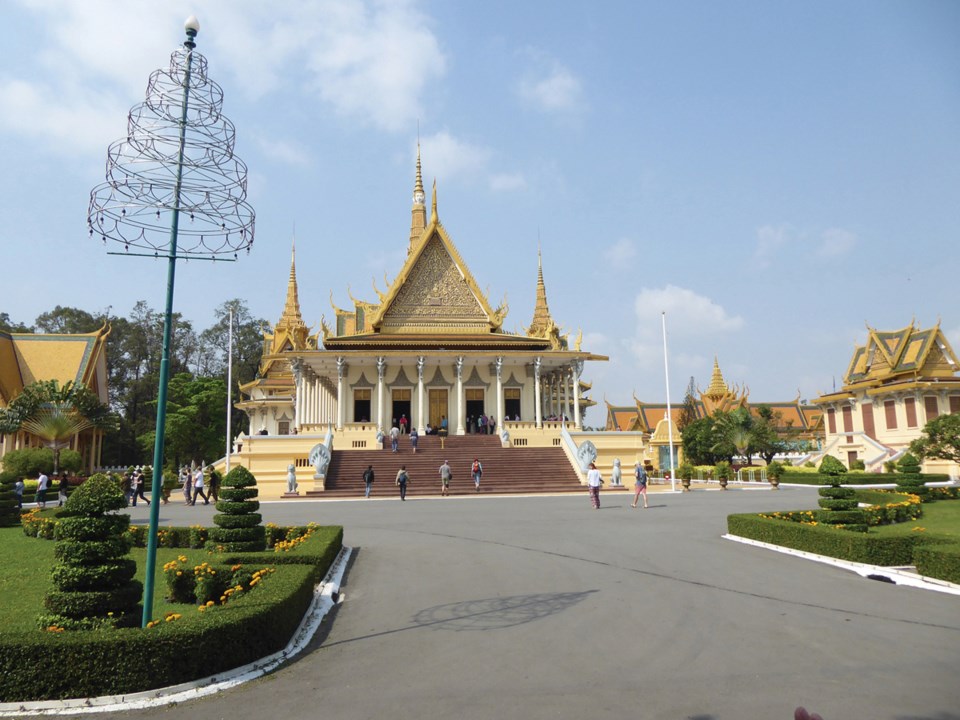 Docking at Phnom Penh along the Mekong, we climb a long stairway to waiting tuk tuks. These motorbike-rickshaws take us along boulevard parkways dotted with statues of Asian luminaries and jungle wildlife. Zipping between bustling shops, glass high-rises and sprawling temples, we arrive at the King’s palace compound.

Near the entrance, a gnarly tree dangles saucer-sized red and yellow flowers and big brown spheres from thick branches. “That’s a cannonball tree,” grins local guide Tri. “Lord Buddha was born under such a tree. As 97 per cent of us are Buddhists, it’s highly sacred.”

In an adjacent pagoda courtyard, we examine detailed frescos covering walls. “This 642-metre mural replicates Angkor Wat’s bas-reliefs of the Ramayana. The scenes portray Prince Rama’s quest to free his beloved wife Sita from Ravana,” smiles Tri. “See that monkey army? It helped him with this rescue!”

Entering the Silver Pagoda, we see only one patch of its silver-tiled floor remains exposed. Carved from Baccarat crystal, the Emerald Buddha sits on a gilded dais. Another stands beside him, cast in gold and studded with diamonds. The sculpted backgrounds of several statuettes depict episodes from this Indian lord’s spiritual journey.

Tall silver-grey stupas encircle the Silver Pagoda, each ornately carved structure holding ashes of the royal family. Near the exit, an elderly duo plays exotic, sweet-sounding xylophones. Back in our tuk tuk, our driver whisks us off to Cambodia’s National Museum.

Arriving at Killing Fields Memorial Park, a placard illustrates where weekly trucks delivered families for execution or transfer to local prisons. Boardwalks loop us around mass graves. Another sign identifies a gravesite that contained over 450 female bodies. Beside one site, string-blessing bracelets hang on a tree where guards beat children. In the centre towers a modern white stupa commemorating the victims. This structure provides a further reminder of this atrocity, over 5,000 glass-encased skulls.

Our last stop is a prison. Wrapping a large city school in barbed wire, the Khmer Rouge incarcerated, interrogated and tortured prisoners in the classrooms. Two rooms exhibit graphic photos of these Cambodians. Metal gallows conjure the hangings. In a former prison yard, one of seven survivors sells his memoir recounting prison atrocities and explaining how being the prison repairman saved his life.