Ireland: Stepping back in time on Great Blasket Island

A first stop wherever I travel is to a bookstore to buy works by local authors, which is how I came to be reading Peig Sayers while I was sitting on a grassy knoll on the Great Blasket Island in southwestern Ireland.
Sep 6, 2019 6:05 AM By: Kathy Vance 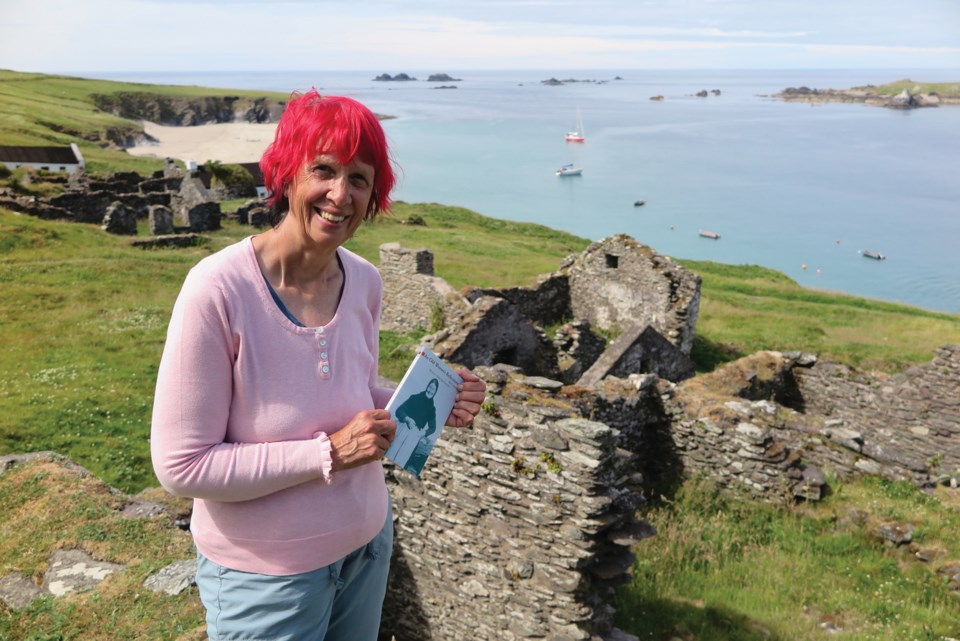 Travel writer Kathy Vance with a copy of An Old Woman’s Reflections by Peig Sayers.

A first stop wherever I travel is to a bookstore to buy works by local authors, which is how I came to be reading Peig Sayers while I was sitting on a grassy knoll on the Great Blasket Island in southwestern Ireland. In An Old Woman’s Reflections, Sayers (1873-1958) is looking out on a sea as “quiet and shining” as that before me now in 2019 and is recounting the pleasures and griefs of her life on this same island all those years before. The Great Blasket is now deserted, its one village in ruins. The site is administered by the Office of Public Works of Ireland as a National Monument. Easily accessible if the weather holds – you must telephone the ferry at 9:30 in the morning to check that it is running – the Great Blasket was the highlight of my week on the Dingle Peninsula, County Kerry, Ireland.

I travel Europe without a car, and found the Dingle Peninsula easy to navigate. With my friends, I shared a cab to the newly built Blasket Centre, a marvelous collection of historical data, local art works, literature, and audiovisual material to provide the background you need to fully appreciate a trip to the island. In the early years of the 20th century, scholars flocked to the island to learn Irish and to collect folklore, but their most significant undertaking was to encourage the local islanders to record their own experiences in their own words, and the results are works that have become classics of Irish and world literature, including Peig Sayers’ autobiography and later reflections. Another classic is Maurice O’Sullivan’s Twenty Years A-Growing about his island boyhood.

The Blasket Island ferry leaves the mainland from Dunquin Harbour, walkable from the interpretative centre. The ferry trip is an adventure in itself since you must first be transported by inflatable boat to the ferry, which cannot load from the shallow, rocky harbour. Lifejackets and safety instructions are provided and taken very seriously. On the 20-minute crossing we were able to discern two film locations from The Last Jedi Star Wars films. Upon arrival, we were again transferred group by group to the one inflatable boat for landing. We were happy to await our turn since we had a great view of the sandy beach with its many seals basking in the sun.

As soon as you arrive, check the times for the tours given by Public Works as the guides are enthusiastic and full of interesting information. Thanks to the tour, I was able to stand by the ruins of the two-room house that Peig Sayers lived in for 20 years with nine other people. She had ten children; only six survived to adulthood. One adult child fell off a cliff while pulling heather. Possessing a prodigious memory, wide emotional range, and incredible performance skills, Peig Sayers was considered the Queen of Gaelic story tellers and one of the world’s greatest story tellers – she was able to recount from memory 375 traditional tales in Irish, a language that she could neither read nor write because Irish was cruelly banned in the schools at that time. All her stories were narrated by her in Irish and were written down by others.

As the guide explained, the houses were built into the hillside, with the effect that mould was ever present. As one of the poorest group of islanders, Peig was in her last years granted a more modern house further up the hill near what is now the island café.

The Great Blasket has a wide appeal. It is famous for a variety of bird and marine wildlife. The island was settled by people who were evicted from the mainland during the hunger years of the famines, and Marxist philosophers were keen to study a society whose economy was not based on private property. Today this steep, grassy islet offers peace and solitude, great walking, a sandy beach, invigorating Atlantic air, and – if you read its writers – great wisdom.

Dingle is a busy, tourist centre; that means many good restaurants with fresh fish off the dock, pubs with great music (my friend was allowed to sing Spancil Hill in the Dingle Pub with a local folk and trad group called The Smoking Badgers), a tiny brewery with tour, and a number of small-group day and half-day tours of the peninsula to choose from. The area is famous for its ruins, such as Dunbeg Promontory Fort, beehive stone huts, Gallarus Oratory (1,300 years old), Kilmalkedar dry-stone churches, and famine cottages. The beehive and famine cottages sites also encourage visitors to hand feed their lambs, sheep, and donkeys, which is a real treat for city dwellers. My friends and I rented a house a short walk from the town, where we enjoyed the quiet panorama of sheep and cattle grazing on the green hills. If you love history, literature, walking, and clean air and water, you’ll love Ireland and the Dingle Peninsula.