Herculaneum: The other Pompeii

From the elegant Viking Star, we explore astonishing early civilizations from Greece to Italy. At Naples, most shipmates visit Pompeii; we head to Herculaneum. Looking down from the viewpoint, residences seem just recently deserted.
Mar 8, 2019 6:05 AM By: Chris Millikan 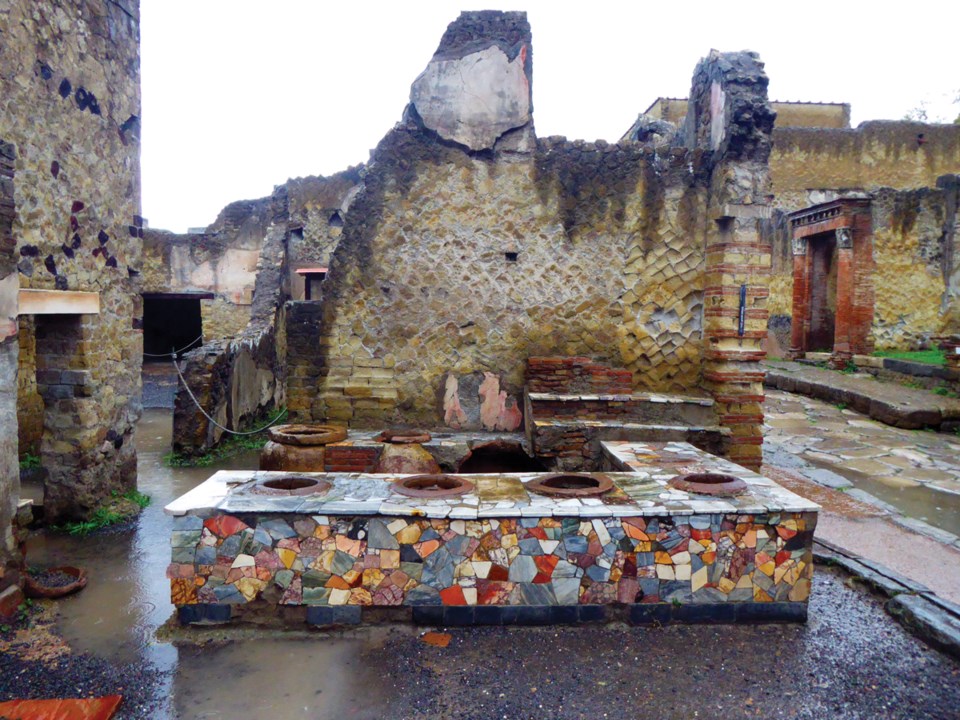 An ancient thermopolium (from the Greek, literally “a place where hot is sold”) – a commercial kitchen in Herculaneum, where one could purchase ready-to-eat food.

From the elegant Viking Star, we explore astonishing early civilizations from Greece to Italy. At Naples, most shipmates visit Pompeii; we head to Herculaneum.

Looking down from the viewpoint, residences seem just recently deserted. The volcano that entombed the flourishing city for over 1,700 years rises ominously in the distance.

“Though excavations have been ongoing since 1738, much of the ancient town remains buried. Located upwind from the volcano, Herculaneum sustained little damage from the falling ash and pumice that crushed Pompeii. Instead, flowing volcanic mud filled buildings from the bottom up, preventing their collapse. The mud formed an airtight seal that preserved the town.”

Descending a dimly lit tunnel, we cross a small bridge to the original dock. Bleached skeletons sit and sprawl under former boathouse archways. “Herculaneum prospered from trading and fishing. Archeologists believe most of the 20,000 residents escaped by sea,” recounts Sofia. “These stark remains likely represent those awaiting rescue.”

Gathering on an extensive terrace, Sophia tells us its namesake was Marcus Nonius Balbus, a prominent civic patron. His commanding marble figure stands high on a pedestal. Inscriptions on the adjacent memorial list his many accomplishments.

A ramped stairway leads upward into another public square. Sophia shepherds us along the main street, onto cobbled side streets and into compact, remarkably undamaged neighbourhoods. One public water fountain sports a man’s worn bearded mouth as a spout; another displays a carved relief of a gowned woman.

“Residents met daily at such fountains to get water and exchange gossip,” elaborates Sophia. “Some fountains flowed continuously, flushing the streets.”

Inside a series of villas, we notice distinctive characteristics prompting their names. The town’s first human remains were found in House of the Skeleton where a cupid relief sits above a shrine for household gods. Built in the second century BC, Samnite House features vivid red geometrics, the town’s oldest paintings. At House of the Wooden Partition, carbonized sliding doors separated the atrium from other rooms.

And a wealthy college in charge of glittering imperial events, Hall of the Augustales also stands out. Pedestals for Augustus and Julius Caesar’s grand statues remain. Wonderful mythically themed frescoes embellish opposite walls of the main alcove. On one side, Hercules sits beside Juno, Queen of Gods, and Minerva, Goddess of Wisdom. And on the other, he battles fiercely for Deianira’s love.