Ex-President Gbagbo back in Ivory Coast after acquittal 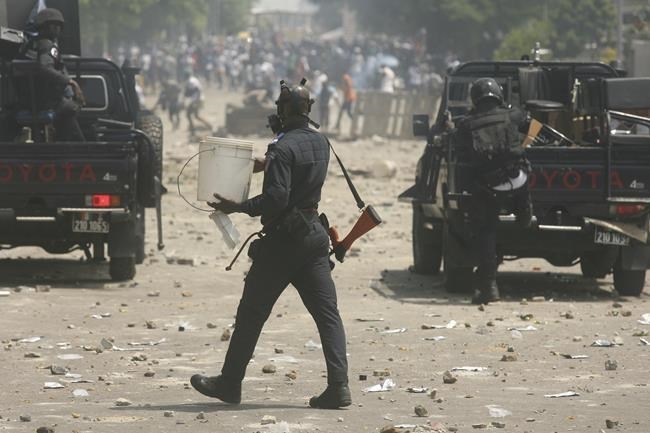 Gbagbo was extradited to the International Criminal Court at The Hague in 2011 and spent eight years awaiting trial on war crimes charges. A judge acquitted him in 2019, saying prosecutors had failed to prove their case.

The verdict was appealed but upheld in late March, clearing the way for Gbagbo to leave Belgium, where he had spent the past two years.

After making his way down the steps to the runway, Gbagbo was escorted to a VIP hall at the airport, where he was greeted by political allies and his wife, Simone. She did not attend his trial at The Hague because the ICC also had issued a warrant for her arrest on charges related to the post-election violence.

While the government led by his then-rival President Alassane Ouattara has allowed Gbagbo’s return to Ivorian soil, there were already concerns about what role the divisive former leader may play in national politics.

Gbagbo's supporters began arriving near the airport at 6 a.m., long before the ex-president had even boarded his flight in Brussels. Tensions between the jubilant crowds and security forces were high, with tear gas being used to disperse people coming to greet Gbagbo.

The ex-president made no comment to journalists before getting into a vehicle that was soon encircled by crowds. Officials from his political party had said he planned to make a tour of Abidjan to visit supporters in his strongholds, but it was not immediately clear how his flight’s delayed arrival might affect those plans.

Gbagbo’s opponents maintain he should be jailed in Ivory Coast, not given a statesman’s welcome. Some demonstrated outside Gbagbo’s residence in the Cocody neighborhood of Abidjan on Wednesday.

Thursday, though, was mostly a day of jubilation for Gbagbo’s supporters, who long have maintained his prosecution was unfair and politically motivated. The ex-president garnered nearly 46% of the vote in 2010 and maintains a strong base of supporters.

“After his arrival we want peace and reconciliation, we want to live together because we were born together so we are obliged to live together” said Chief Tanouh, a traditional leader from the country's east.

Longtime rival Alassane Ouattara, who was ultimately declared the winner of the 2010 vote and has been president ever since, did not greet Gbagbo at the airport Thursday.

Government spokesman Amadou Coulibaly said that was not the protocol for other former heads of state.

“For us, it is a normal arrival of a citizen returning to his country,” he said.

After the ex-president’s acquittal was upheld, Ouattara had said the former president’s travel expenses, and those of his family, would be covered by the state.

It remains unclear what will become of other pending criminal charges against the ex-president.

Gbagbo and three of his former ministers were sentenced to 20 years in prison on charges they broke into the Abidjan branch of the Central Bank of West African States to get cash amid the post-election crisis in January 2011.

It’s unlikely that Ivorian authorities will jail the ex-president, says Ousmane Zina, a political scientist at the University of Bouake. However, Ouattara is likely to attach conditions to Gbagbo’s return in an effort to avoid reigniting tensions of the past, he added.

“Before granting a pardon or amnesty, he will want to obtain a guarantee that the country will remain peaceful,” Zina said.