Opinion: Debate question: why are we here? 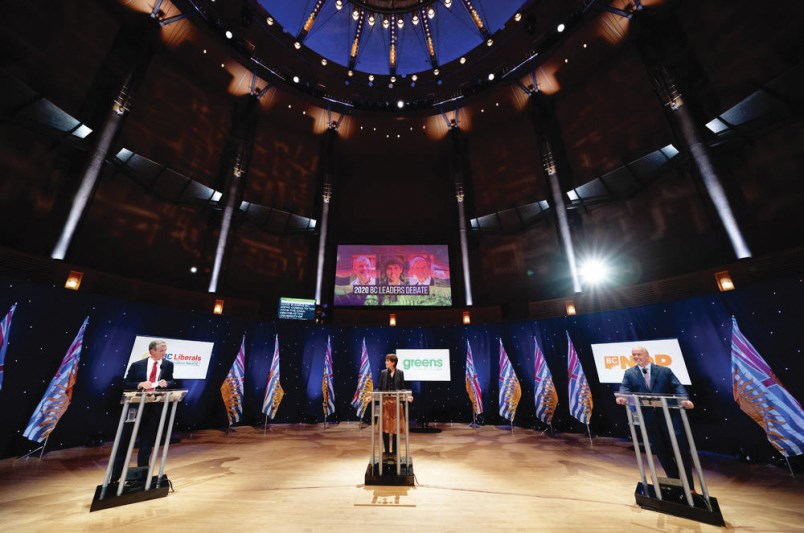 Pandemic-preoccupied B.C. got a chance to tune into the general election Tuesday night during the televised leaders debate, and one of the big issues was … why are we doing this?

The election call itself got a fair amount of attention as -Liberal and Green leaders Andrew Wilkinson and Sonia Furstenau launched on NDP leader John Horgan for calling it.

Questioning how she felt watching the signed promise not to call an early election get broken three weeks ago, Wilkinson asked Furstenau: “Your party made John Horgan premier, he broke his deal with you three weeks ago. He broke his own fixed election dates, he called the election for purely selfish reasons. Can John -Horgan be trusted on the environment or anything for that matter?”

Furstenau, who took her own shots at Horgan on that sore point separately, said: “When people are elected we put aside partisanship and we put our duty to service above all else.”

That had been happening in the legislature and “we need to get back to that.”

Horgan acknowledged grappling with the issue, but said he decided “we need to put politics behind us.”

Furstenau said that was “astonishing” to hear, when he was “putting us into politics front and centre in an election campaign.”

He was also called out for delaying economic recovery details until a few days before he called the vote.

Horgan said: “I think we did it right. We got the right balance and once the money was in place and started to go out the door … I felt it was time to ask British Columbians where they wanted to go and who they wanted to lead them.”

As expected, Horgan as incumbent took more than his share of hits from the two challengers, dealing with criticisms of his positions on LNG, housing shortfalls and the $10-a-day child care delay.

But he struck back at Wilkinson and the B.C. Liberals, particularly on the history that led to COVID-19’s exposure of how fragile the long-term care system is during a sudden health emergency.

“When we came to government, nine out of 10 care homes did not have the staff to meet minimum standards… That means the 10,000 workers fired at the turn of the century (under a Liberal government) were not able to help seniors when COVID hit.

“The consequences, Andrew, of your decisions were profound and tragic for seniors… I think you should acknowledge that, take responsibility and then we start to build.” Wilkinson retorted that Liberals have built 14 hospitals to the NDP’s zero over the decades.

The three leaders avoided the horrors of the U.S. presidential debate.

The release of concerning COVID-19 statistics hours before the debate showed no one can avoid the fact the pandemic is still the main event.

Earlier, Wilkinson spent the morning regretfully going over some of the gory details of his candidate Jane Thornethwaite’s sexist, insulting remarks about a female NDP candidate.

If you think it was bad watching the video, Wilkinson established it was even worse seeing it in real time.

“Many people were embarrassed, including me… That should never have happened. It was sad, frustrating and disappointing for everyone and there is no place for those kind of sexist remarks in our society.”

He also acknowledged a personal falldown in not intervening.

“Many of us were increasingly embarrassed to the point of being appalled. But it’s hard to stop the train at a social event when you don’t know what the next words will be.

“I wish I had found a way to intervene at the time without embarrassing Ralph Sultan and the other people, but what’s done is done and we have to make amends.

“It was abundantly clear by the end of the roast that she’d made a bit of a fool of herself.

“In retrospect I should have spoken to her about never doing that again but I would think she learned that lesson on the spot. She was really embarrassed herself.”