The last time politicians convened at the legislature for a throne speech, so did hundreds of pipeline protesters, who blocked all the entrances, physically impeded staff and disrupted the government’s moment in the sun.
Dec 9, 2020 4:20 PM By: Les Leyne 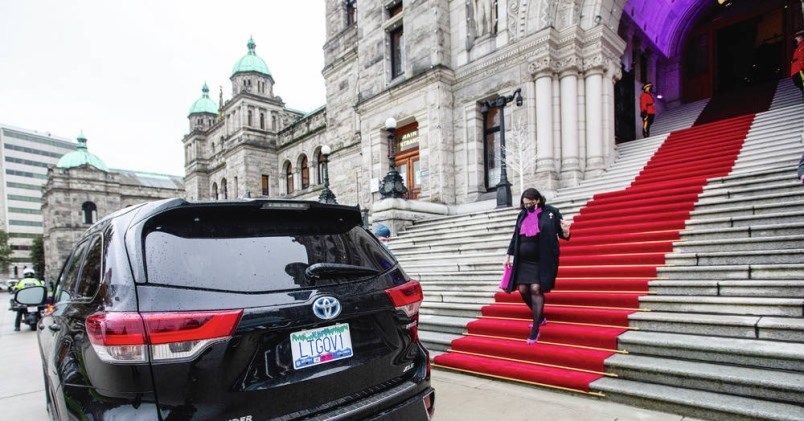 The last time politicians convened at the legislature for a throne speech, so did hundreds of pipeline protesters, who blocked all the entrances, physically impeded staff and disrupted the government’s moment in the sun.

Officials responded by getting an injunction and the legal warnings against similar shows of force were posted on all the doors for months. They were scarcely needed, as the pandemic started curtailing gatherings all by itself.

So Monday’s socially distanced version of the speech, like everything else this year, was a little different. Hardly any politicians showed up, let alone protesters. The traditional gathering verged on a non-event, like countless other gatherings in the past 10 months.

No band, no artillery salute and no fun.

During that rowdy February day, among the many things overlooked in the speech was the lack of official notice given to COVID-19. It didn’t rate a mention, either then or in the budget a few days later.

There were only four confirmed cases in B.C., all of them recovering in isolation at home. They were the first of 38,000 since identified in B.C. There had been 370 tests administered at that point, the first of 1.2 million to come.

“Don’t touch your face” was still a strange new thing and the official line in the daily reports that started coming out was: “The risk of this virus spreading within B.C. remains low at this time.”

That long-forgotten moment in the legislature stands now as a lesson in how quickly events can derail a government’s agenda.

Monday’s speech, by contrast, was devoted almost entirely to COVID-19’s impacts. The traditional observance of the passing of notable British Columbians was replaced by words to memorialize the 500-plus victims of the virus, and the death toll in the opioid crisis.

It also formally recognized how B.C.’s comparative early success in limiting the spread of the virus degraded over time.

“We open the 42nd parliament at a difficult moment, when the successes we collectively achieved in flattening the COVID-19 infections curve in the spring stand in contrast with the toll extracted by the wave we confront now.”

There was a notable appeal to continue the unanimity of purpose, which has been flagging as COVID fatigue sets in.

“Overwhelmingly British Columbians have united behind front-line caregivers and workers and continue to reject those who would divide us.”

The current commitments to long-term care make February promises on the same theme pale in comparison. Back then the government groped for obscure statistics about meeting the standard for hours-per-resident to show improvement in that field.

Today, the numbers are easier to understand. As in, planning to add 7,000 more front-line health workers including aides to ensure seniors get high-quality care.

That and the other expensive measures taken in the health sector will make for some remarkable impacts in next February’s budget.

Premier John Horgan tried to inject some optimism by noting that vaccines are imminent.

“Already we can see the signs of better days ahead, as science and research lead the way with new treatments and vaccines.”

His speech appealed to everyone to work together to make those better days a reality as quickly as possible. But the trends in the case reporting prompt fears that the pandemic is going to rampage right up to the point where it is brought under control.

“The steps taken so far have saved lives. However, as we face the latest wave, we must do even more.”

The context was on the medical side, but more is needed on the recovery side as well and the speech promised “to redouble our efforts.”

The controversial economic recovery plan that turned into a re-election platform costed out at $1.5 billion. It included a plan for a $1,000 cheque to all families at or below the $125,000 income level. Originally planned for Christmas, the new target is the end of the year.

Legislation to that effect will occupy the house for a few days.

Look forward to a year-end bonus. But remember the lesson from February: Throne speech agendas are subject to change without notice.