TORONTO — Penny Oleksiak describes Summer McIntosh as "all gas, no brakes." The 14-year-old McIntosh will be among Canada's youngest Olympians in Tokyo, if not the youngest.
Jun 20, 2021 4:38 PM By: Canadian Press 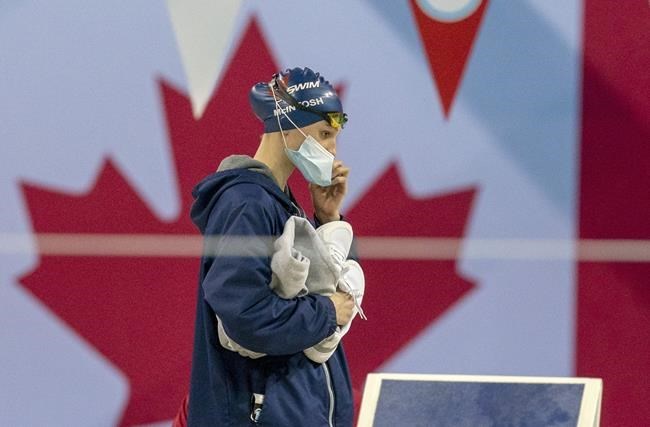 The 14-year-old McIntosh will be among Canada's youngest Olympians in Tokyo, if not the youngest.

McIntosh edged Oleksiak in the 200-metre freestyle final in Sunday's trials at the Pan Am Sport Centre.

The two Toronto swimmers went under the requisite qualifying time to be nominated to the Canadian team, although Oleksiak was already pre-selected to race the 200 in Tokyo.

Oleksiak was once the under-the-radar teen who at 16 exploded onto the swim scene with four medals, including gold in the 100 freestyle, at the 2016 Summer Games in Rio.

McIntosh brings the same fearlessness of youth, which 21-year-old Oleksiak says challenges her daily to swim fast in their training group at the Pan Am Sports Centre.

"I love Summer. I hate training with Summer," Oleksiak said. "She does not die. She's 14 so she doesn't get a lot of lactic acid so every time I train with her, I know she has the gas on and it's all gas, no brakes with her.

"It's super fun. I was saying this morning it's funny how my biggest competition is the smallest person in the pool right now.

"It's frustrating because I know going into races, she's going to go, go, go. But always motivating and inspiring. I love her work ethic. She's really strong in and out of the pool mentally. I just love her. Honestly, she's so cute."

McIntosh is the daughter of Jill Horstead, who swam for Canada in the 1984 Olympic Games.

"She's just been so awesome and motivating and it's such an incredible opportunity that I get to swim with her every day," McIntosh said.

"It was a really fun race. I knew if I was within striking distance in the first 100 (metres), I could be good on the last 50 and that was my plan going in and it seemed to work out."

The 2020 swim trials were cancelled with the postponement of Tokyo's Olympic Games to 2021 because of the global COVID-19 pandemic.

This year's trials originally scheduled for April in Toronto were postponed to May and again to June while Ontario grappled with cases of infection.

The five-day trials that conclude Wednesday feature 185 swimmers from 64 clubs across the country.

The competition is held under pandemic protocols and restrictions, and is the primary means of selecting Canada's Olympic swim team.

The Olympic Games open July 23 and close Aug. 8 in Tokyo.

Canada can send a maximum of two swimmers per event per gender, but in addition to finishing top two at trials, racing under the 'A' qualifying time set by the world governing body FINA is needed.

The only other swimmer to meet that threshold Sunday in Toronto was Winnipeg's Kelsey Wog in the 100-metre breaststroke.

"I've been really going for it since last Olympic trials when I just missed it, so it's definitely been on my mind this whole time," Wog said.

"My race was a little bit less than what I could have done. It felt a little bit tight, a little bit rushed, probably just from nerves and excitement, but I'm still happy with it."

Swimming Canada needs to fill in the 4 x 200 women's freestyle relay, so others from Sunday's 200 final are candidates.

If there are vacancies on the Canadian team after trials, athletes may be considered for inclusion if they've swum a qualifying time at a sanctioned meet since March 2019.

That scenario would be reviewed by Swimming Canada to determine if the athlete will be competitive in Tokyo.

Oleksiak was pre-selected for Tokyo in the 200 freestyle, but not the 100, which she'll race Tuesday.

She was faster in Sunday morning's 200 preliminaries than in the final.

Because the pandemic wiped out international and domestic racing for months, it had been a while since Oleksiak navigated heats and a final on the same day.

"This morning was a lot better than tonight," Oleksiak said. "We haven't got to do much prelims and then finals racing so it was weird for me with my preparation tonight, trying to figure out the schedule, get a nap in. I was hungry before my race. It was kind of all over the place.

"I wasn't as prepared for the final as I wanted to be, but I think it's a learning lesson for Tuesday."

This report by The Canadian Press was first published June 20, 2021.