A loss Saturday to NOLA Gold would result in the Toronto Arrows being mathematically eliminated from Major League Rugby playoff contention. And the Arrows (4-8-0) have more problems to come as the regular season winds down.
Jun 18, 2021 9:35 AM By: Canadian Press 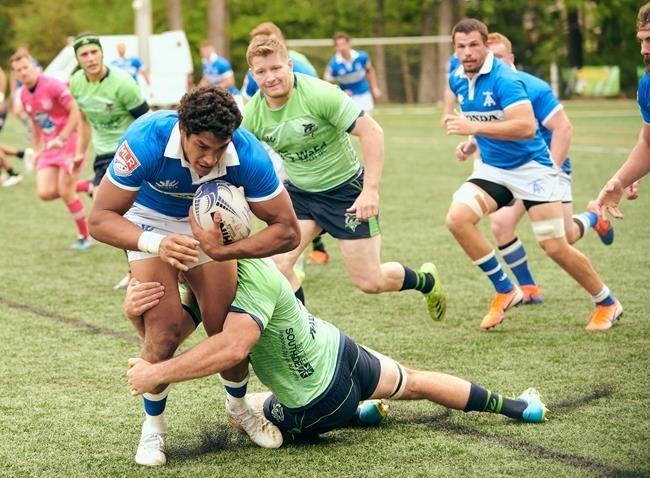 A loss Saturday to NOLA Gold would result in the Toronto Arrows being mathematically eliminated from Major League Rugby playoff contention.

And the Arrows (4-8-0) have more problems to come as the regular season winds down.

After games against NOLA and Rugby United New York, Toronto could lose more than a dozen players to international duty with matches against Old Glory DC and the New England Free Jacks remaining in early July. Nine Arrows will be joining 23rd-ranked Canada for July games at No. 6 Wales and No. 3 England.

The Arrows only brought 30 players down to suburban Atlanta, their pandemic home away from home, so they have had to bring in new talent just to be able to field a matchday 23 in their final two outings.

"We're having to turn over 40 per cent of our roster," said Mark Winokur, Toronto's chief operating officer and GM. "It's not like if we were at home where we could call people in who are local. It's quite a process to get people down here."

Complicating the matter is that pandemic restrictions back home mean little, if any, rugby is being played.

Nine Arrows have already been called up by Canada, which still has two spots to fill on its 32-man touring roster.

LeSage and Rumball are the Arrows co-captains and will serve the same role with Canada, along with Rugby ATL's Matt Heaton.

According to a survey by Americas Rugby News, the Arrows will have twice the number of call-ups as the next-highest MLR team.

Winokur is not complaining. One of the Arrows' goals is to help feed the national team. But it doesn't ease his job.

"It's a double-edged sword," he said.

Winokur has already been busy, securing replacements. The Arrows announced the signing of six players this week including Sam Malcolm, the club’s all-time leading scorer. The New Zealand fly half/fullback returns after a short stint with Japan's Kamaishi Seawaves, whose season has been disrupted by the pandemic.

"He hasn't had a lot of rugby since he left here last year and he just said 'Hey, want me to come over and give the boys a hand?'" said Winokur. "He's a true Arrow through and through."

He will not be available for Saturday's game, however.

Stevenson, 21, arrives on loan from the Utah Warriors. The six-foot-five forward is a graduate of Rugby Canada’s Maple Leafs sevens development program.

The Arrows have lost three in a row and five of the last six. With props Cole Keith and Tyler Rowland injured, Toronto had to borrow prop Luke Schlotman from Rugby ATL as an emergency replacement for a 47-21 loss to Austin last week.

Toronto only has five props in Georgia, with four needed in the matchday 23. Schlotman may be needed again this weekend, depending on how the injured players fare in treatment,

"It's not normal and not something we like to do. But it's survival mode really," Winokur said of the loan.

Then again, not much has been normal for the Arrows this season.

"Just trying to operate a business in a country where you have no ties, roots, infrastructure, nothing, is very, very difficult," Winokur said. "You don't know who to go to for solutions to problems. There's been enormous challenges with COVID. There's been stuff on the field that we wouldn't normally have to deal with.

"Not being able to go home to your friends and family and have any life outside this situation has, I think, been pretty tough on us."

On the field, he notes the Arrows had three games decided in the last minute "by official decisions that we didn't quite understand."

"But we have to be resilient enough to overcome those things and in a lot of cases we just haven't been," said Winokur, who has not seen his family since March 18. "Yeah, I do think there's no question that the situation we're in bothers some people … The players are human beings. Some are able to deal with this situation better than others."

"We're not where we want to be … but having to play an entire season on the road does not make it a level playing field for us," he added. "And we knew that going in."

Toronto has played 33 career MLR games. Only eight have been in Toronto.

"We're just continuing to deal with it as best we can," said Winokur. "We're definitely going to keep going."

As for whether the league will help with the additional costs of setting up shop south of the border, Winokur said that "is sort of to be determined."

NOLA Gold (6-4-1) is coming off a 25-21 win over Old Glory DC. and has won two of its last three (the loss was by one point to Rugby ATL). NOLA, whose roster includes Canadians Kyle Baillie, Eric Howard, and Lockie Kratz, beat Toronto 22-14 when they met earlier in the season.

This report by The Canadian Press was first published June 18, 2021