MONTREAL — For Ottawa coach D.J. Smith, the growth of his young team was illustrated late in the second period Saturday when Josh Anderson scored to bring the Montreal Canadiens to within one at 4-3.
Apr 3, 2021 8:18 PM By: Canadian Press 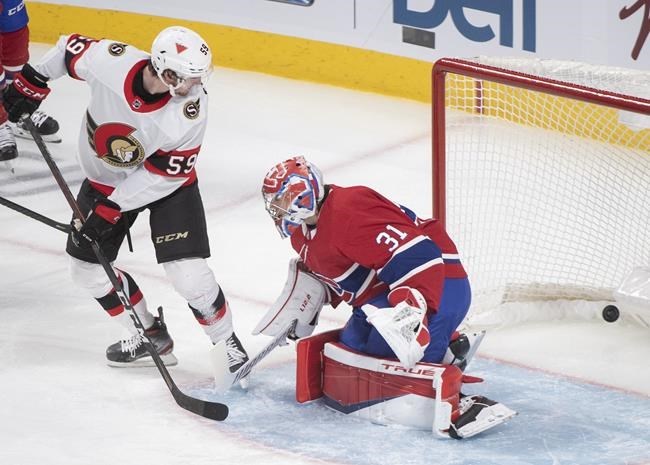 MONTREAL — For Ottawa coach D.J. Smith, the growth of his young team was illustrated late in the second period Saturday when Josh Anderson scored to bring the Montreal Canadiens to within one at 4-3.

"Earlier in the year, that game's going to overtime probably," Smith said. "There would have been panic and there was no panic on the bench (Saturday). The guys just seemed so much calmer. They were looking to make plays, they were holding onto pucks. It was great to see."

Ottawa, showing that cool head, added two more goals in the third to seal a 6-3 victory.

Brady Tkachuk, Connor Brown and Drake Batherson — into an empty net with 2:55 remaining — also scored for the Senators.

Tkachuk was an assist short of a Gordie Howe hat trick on the night after fighting Canadiens captain Shea Weber in the first period.

"Tonight we were just not sharp. We didn't play a solid game. … On the other side, they played better," he said.

Anderson scored twice and Tyler Toffoli added a single for the Canadiens. Toffoli, returning after missing the last three games through injury, upped his season goal total to 19 and was dangerous all night.

"They're a hard-working team. … They're well-coached," said Anderson. "They've got some young guys in there that just work hard every shift and they just reload and they just work really well together as a team.

It was an entertaining back-and-forth game with Montreal trying to pull even with the Sens throughout the evening. Anton Forsberg, picked up on waivers from Winnipeg last month, had a good night in the Ottawa goal as Montreal outshot the Senators 38-32.

"He gave us every chance. … The kid's really focused and you've got to be happy for him. He battled for us," Smith said.

Down 5-3 with 5:19 remaining, Montreal went on the power play but failed to take advantage. Ottawa then sealed the deal with an empty-net goal.

Montreal (16-9-9) came into the game riding a three-game win streak sandwiched around a nine-day hiatus due to COVID-19 protocols. Ottawa had lost two straight, including a 4-1 defeat Thursday to the Habs.

Forsberg made his second start of the season — and the 50th of his NHL career. At the other end, Carey Price was looking for his 50th career shutout.

Ottawa was handed an early opportunity when Brendan Gallagher was assessed a double high-sticking minor after just 28 seconds. Tkachuk took advantage 14 seconds later, stuffing the puck in after Batherson found him at the edge on the crease for his 12th of the season.

Toffoli replied on the power play at 5:31, with a howitzer of a one-timer from the faceoff circle. Playing on a line with Jonathan Drouin and Jesperi Kotkaniemi, Toffoli could have had two more in the period but was stopped by Forsberg.

Brown scored for the Sens shorthanded at 12:07, poking in a rebound off a Nick Paul shot after Braydon Coburn held off a Hab to get the puck out of the Ottawa end and set up the rush.

Tkachuk and Weber dropped the gloves with 3:26 remaining in the first period after exchanging pleasantries with their sticks around the net. Score it a draw, which likely counts as a win for Tkachuk given the opposition.

The two have history, with Tkachuk needing dental work after an errant Weber stick in a game on Feb. 23.

Asked what he was thinking during the fight, Tkachuk replied: "Hold on for dear life."

But the fight was a clear sign for Smith that his team was not gong to be pushed around.

After Price made back-to-back saves to deny the Senators, the Canadiens tied it up at 2-2 at 6:58 of the second period with Anderson beating Forsberg glove-side with a high shot. Ottawa answered 51 seconds later with Dadonov tipping home a Thomas Chabot shot through traffic from the point.

Dadonov made it 4-2 at 16:04 after both Montreal defencemen headed behind the net to coral Anisimov, only to see him send the puck to his fellow Russian left unmarked in the slot. It was Dadonov's 11th of the season.

Anderson scored his 13th with 72 seconds remaining in the second period, beating Forsberg with Montreal's Corey Perry making a nuisance of himself on the doorstep to cut the lead to 4-3.

Gallagher headed to the Montreal locker-room late in the second after an attempted bodycheck at the boards but returned for the start of the third and came close to beating Forsberg on an early rush.

Formenton restored Ottawa's two-goal lead at 2:55 of the third, beating Price after Jeff Petry lost the puck near the Montreal goal.

NOTES: Weber and Nick Suzuki each had two assists for the Habs. Thomas Chabot registered a pair of helpers for the Sens. … Newly acquired centre Eric Staal, his quarantine nearly complete, is expected to make his Canadiens debut Monday against visiting Edmonton. Ottawa plays at Winnipeg the same night.

This report by The Canadian Press was first published April 3, 2021

Canadian Olympic Committee plans to access donated vaccines for athletes
May 6, 2021 8:09 AM

Anti-Olympic petition gains tens of thousands of signatures
May 6, 2021 8:09 AM

Three Canadian teams to play in women's hockey Dream Gap Tour in Calgary
May 6, 2021 7:19 AM
Comments