Winnipeg Jets coach Paul Maurice knows the Ottawa Senators aren't highly regarded around the NHL. The Senators linger in the basement of the North Division, but the young squad has wreaked havoc on several Canadian counterparts this season.
Apr 5, 2021 10:04 PM By: Canadian Press 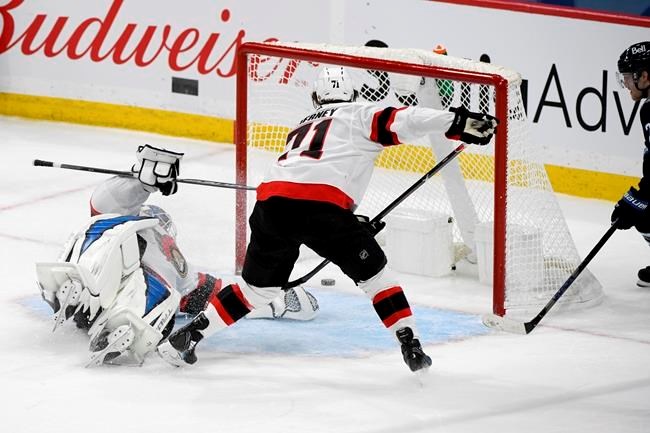 The Senators linger in the basement of the North Division, but the young squad has wreaked havoc on several Canadian counterparts this season. So it didn't surprise Maurice when the Sens made a late push against the Jets on Monday.

“I’ve got way, way more respect for Ottawa than I think most people do. And I think that might be why we’re 5-1 on them," the veteran bench boss said after the Jets eked out a 4-3 win.

Winnipeg held a 4-1 lead heading into the final frame Monday but Ottawa refused to go quietly.

The Sens bit into the lead 10:25 into the third with a power-play goal. Ryan Dzingel sent a cross-ice pass to Josh Norris and the rookie forward ripped a shot from the face-off dot.

With just over three minutes left on the clock, Ottawa whittled the lead to one.

Artem Anisimov dug a puck out along the boards and dragged a pair of defenders with him as he powered to the net. Instead of shooting, the Sens centre sent a slick behind-the-back pass to Connor Brown in the slot.

Brown blasted a shot past Connor Hellebuyck for his 10th goal of the season.

“I was alright with our game straight through. And I didn’t feel that we were under siege," he said. "They’re going to push, pull their goalie, those types of things. I really liked our offensive game, the way we tried to shoot the puck.”

Winnipeg came out strong after puck drop, with Pierre-Luc Dubois opening the scoring just 2:10 into the game. Blake Wheeler dished him a pass from below the goal line and Dubois flicked a quick shot into the top-left corner of the net.

"(Wheeler's) a great passer so he makes it easy out there sometimes," he said. "He sees the ice so well that I just have to get to the open space and more often than not, it’s on my blade.”

Dubois added a second goal — his ninth of the season — at the end of a power play midway through the second period.

Maurice said the 22-year-old forward has made an impact on the Jets since Winnipeg acquired him in a trade for Finnish sniper Patrik Laine at the end of January. And the impact isn't always seen on the scoreboard.

“I know points are important, but he’s a really good young centre ice man that’s going to get better," the coach said. "We’re winning hockey games, he’s helped us do that.

"He’s going to be a good player for the Jets for a long time.”

Adam Lowry and Kyle Connor also scored for the Jets (23-13-3) Monday, and Andrew Copp and Nikolaj Ehlers each tallied a pair of assists.

Dzingel had a goal and an assist for the Senators (13-22-4), but said his team wasn't ready to play "and clearly that showed."

"I'm sure we're going to fix it and be ready to go next game," he said. "Because that clearly wasn't good enough."

Anton Forsberg tied a career-high with 46 shots against and had 42 stops for Ottawa. At the other end of the ice, Connor Hellebuyck had a slightly quieter night, putting up 20 saves.

Ottawa made mistakes Monday night that they hadn't in a long time, said coach D.J. Smith. The team turned over too many pucks and had "too many guys not going."

"We battled back too little too late," Smith said.

"We got rewarded with a few in the third period but ultimately, the better team won."

Winnipeg continues to hold the edge in the 10-game season series between the two sides, with a 5-1-0 record.

The win gave the Jets sole possession of second spot in the North Division. Winnipeg sits six points back of the No. 1 Toronto Maple Leafs.

The Senators will be back in action on Wednesday when they host the Oilers. The Jets will meet the Canadiens in Montreal on Thursday.

NOTES: Ottawa was 1 for 4 on the power play and Winnipeg went 1 of 3. The Senators have power-play goals in their last three games. … Brown has scored in four-straight games. … Forsberg also faced 46 shots on Feb. 14, 2015 when he was playing for the Columbus. The N.Y. Islanders downed the Blue Jackets 6-3 that night.

This report by The Canadian Press was first published April 5, 2021.