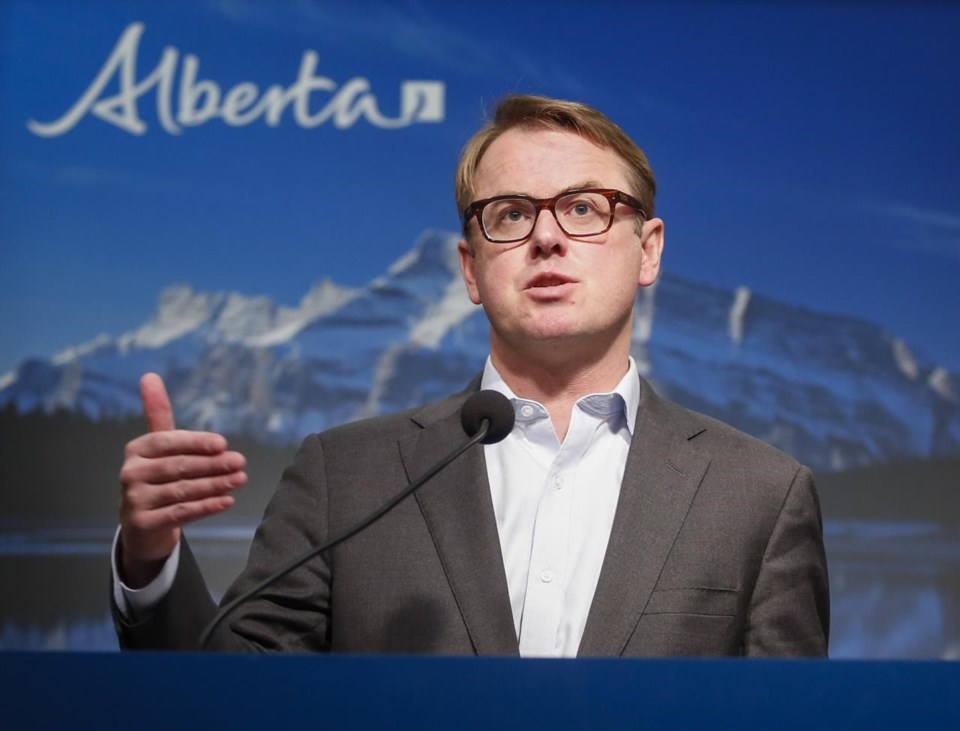 EDMONTON — Alberta’s health minister says the province is considering whether to follow British Columbia in extending the time between COVID-19 vaccine doses.

Tyler Shandro says a committee of COVID-19 experts is analyzing emerging data and a decision is coming.

The B.C. government announced Monday that it will extend the wait between first and second doses to four months to get more people vaccinated overall in a shorter time period.

B.C. based its decision on data from the United Kingdom, Israel and Quebec that shows the first dose of vaccines is 90 per cent effective.

“What the exact period of time (between doses) is going to be is still to be decided. We’ll be announcing it soon, but we will be looking at having that length of time between first and second extended.”

When Moderna and Pfizer-BioNTech began distributing their vaccines late last year, it was recommended the first and second shots be completed within six weeks to be fully effective.

About 235,000 Albertans have so far received at least one shot. About 88,000 have been given the recommended two doses.

Shandro said 55,000 doses of the Pfizer vaccine are expected to arrive every week this month.

A third vaccine, Oxford-AstraZeneca, is also on the way.

“It’s going to give us an opportunity to get more people vaccinated more quickly,” he said.

Oxford-AstraZeneca was approved last week for use in Canada. But a national panel of vaccine experts is recommending it be given to people under 65, because there were not enough seniors in the vaccine's clinical trials to determine its effectiveness in that age group. Shandro said Alberta will follow the guideline.

Dr. Deena Hinshaw, Alberta's chief medical officer of health, reported 257 new cases of COVID Tuesday. There are 261 people in hospital, 54 of whom are in intensive care. There were two more deaths reported, bringing that total to 1,890.

There were 35 new cases of the more contagious variant COVID strains. That total is now 492.

Alberta is keeping many of its restrictions meant to curb the spread of the novel coronavirus until vaccines take hold. Retail stores and worship services are still capped at 15 per cent capacity and entertainment venues remain closed. Indoor gatherings are banned and outdoor ones are limited to 10 people.

Premier Jason Kenney did announce Monday that libraries can reopen with capacity limits and he further eased restrictions on fitness centres. Gyms were already allowed one-on-one fitness training, but they can now offer low-intensity indoor fitness classes, including tai chi, wall-climbing and Pilates.

Emily Slaneff, chairwoman of the Alberta coalition of the Fitness Industry Council of Canada, said the new rules are confusing, contradictory and don’t allow specialized facilities, such as boxing clubs and spin studios, to open at all.

“It’s a really difficult metric to use,” she said. “Two individuals can do the exact same workout and have very different experiences.”

She said a lot of gyms are on the knife’s edge of bankruptcy and need support immediately to survive.

“It feels like they (the government) are toying with lives and livelihoods,” she said.

Shandro said Alberta is following similar policies on fitness centres that have worked in B.C. He added that fitness centre operators are being given latitude to use their best judgment on what is high-intensity versus low-intensity workouts.

“Enforcement, remember, is only ever a last resort.”

This report by The Canadian Press was first published March 2, 2021