Service groups and volunteers are installing a memorial rock wall as part of an ongoing volunteer-driven refurbishment project for Pender Harbour’s only active cemetery.
Nov 18, 2020 11:10 AM By: Sophie Woodrooffe 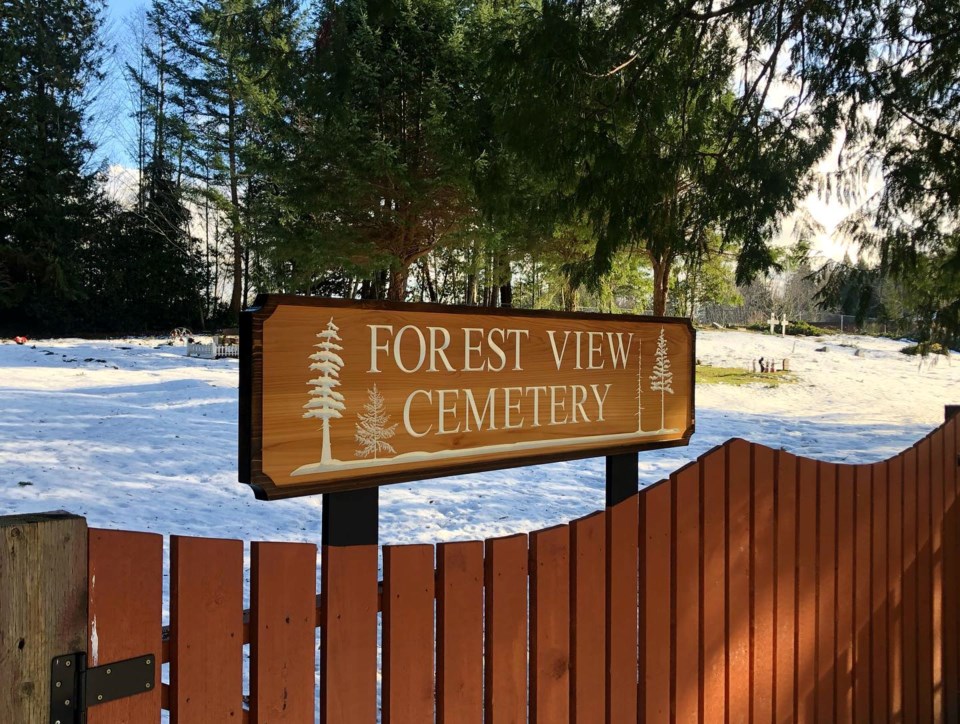 The gate installed at Forest View Cemetery, with a sign donated and installed by woodworkers Kelly Daniel and Simon Williamson.Harbour Custom Works Image

Service groups and volunteers are installing a memorial rock wall as part of an ongoing volunteer-driven refurbishment project for Pender Harbour’s only active cemetery.

Volunteers made progress on cleanup of the Forest View Cemetery on Warnock Road in 2019, raising at least $3,000 to remove blackberry bushes, rebuild a gate, install fencing and a water station for headstones and flowers.

Since then the Pender Harbour Rotary Club has agreed to purchase and install a memorial stone where plaques can be placed to honour those who were cremated or who don’t have crosses or headstones. The stone will be purchased in early 2021, “if not sooner,” said Rotary member Bill Charlton.

The Ministry of Transportation and Infrastructure (MOTI) has also approved the installation of a fence to enclose existing graves located on a MOTI road right of way, according to Sunshine Coast Regional District director Leonard Lee. Another project is underway to identify and mark graves that aren’t readable, said Lee.

Several community groups and businesses have been involved in the project, including the Rotary Club as well as the Warnock family, who maintain the legally-sanctioned cemetery as trustees, Pender Harbour Living Heritage Society and lifelong Pender resident Brenda Scoular, who was instrumental in launching the project. Earlier this year Harbour Custom Works donated a custom entrance sign for the cemetery.

“Brenda and her volunteers sure have the cemetery looking good,” Lee said in an email to Coast Reporter.

Planning is also underway for the installation of a sign at the cemetery about Martha and Martin Warnock, who donated the one-acre property in 1933 in memory of their young son who is buried there.

That work is tied in with another Living Heritage Society project to install interpretative historical signs at Pender Harbour landmarks, including shíshálh Nation history, according to society director Cathy Jenks. “Eventually we’d love to have somebody to do cemetery tours,” she said, adding such tours are becoming more common, as a “way of honouring the people that came before.”

The heritage sign project is funded by the Community Forest through Pender Harbour Hikers and the Pender Harbour and Area Residents Association, according to Jenks.

The two other Pender cemeteries – in Kleindale and Garden Bay – are both closed and in need of upgrades, but according to Lee they are also “on our radar.”

Scoular expressed thanks to the community groups and volunteers who have helped renew the Forest View Cemetery. “The only lesson I can [offer], is if you see something that needs to be done, don’t be afraid to start it,” she said.