The federal election campaign was already a week old before the NDP confirmed Judith Wilson as its candidate, in West Vancouver-Sunshine Coast-Sea to Sky Country, but the 67-year-old lawyer’s team has got up to speed quickly.
Oct 1, 2019 4:19 PM By: Sean Eckford 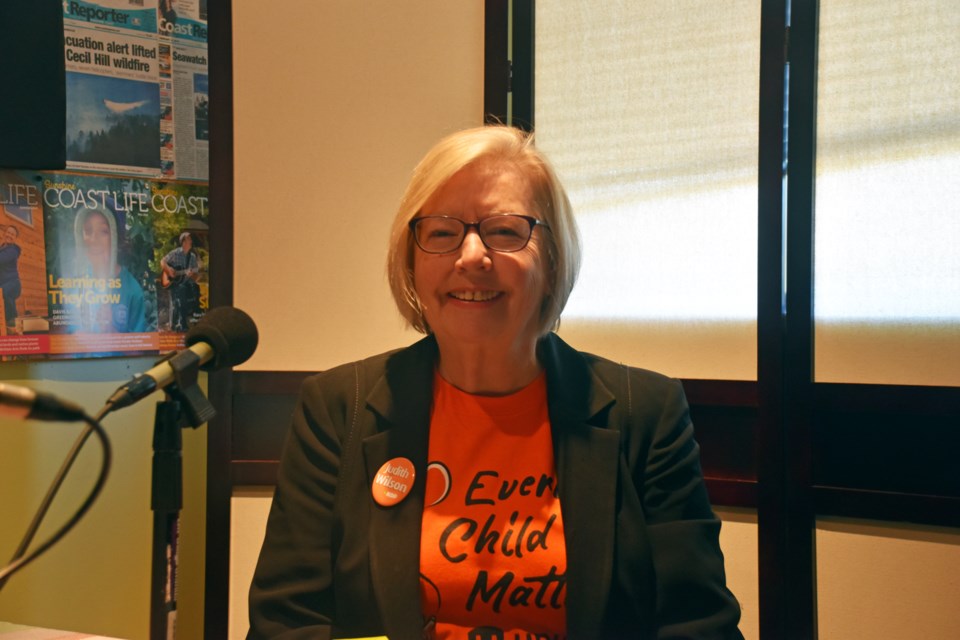 The federal election campaign was already a week old before the NDP confirmed Judith Wilson as its candidate, in West Vancouver-Sunshine Coast-Sea to Sky Country, but the 67-year-old lawyer’s team has got up to speed quickly.

Wilson, who lives in Langdale, is an experienced campaigner, having worked on elections around the country as a political organizer for the NDP, and as the party’s candidate in the riding in 2006, when she picked up 20 per cent of the vote in a third-place finish.

In an interview for Coast Reporter Radio, Wilson said her work in family law and as a legal aid lawyer has made her “fully aware of some of the challenges that lower income people face and how that impacts their families.”

“I consider myself as someone who cares deeply about the values that people like Tommy Douglas put forward,” she said.

Wilson said the current campaign feels different from both 2006 and 2015 and West Vancouver-Sunshine Coast-Sea to Sky could be difficult to call.

“What we’ve had here now is a huge feeling of betrayal by a lot of people who voted Liberal in the last election, and where that vote is going to go will probably be what determines what happens in this riding,” said Wilson, who added that she plans to “go at it hammer and tongs” to bring that vote to the NDP.

“What we are dealing with here is an election that we really, truly hoped would be fought on the basis of proportional representation and a lot of people threw their votes to the Liberals on the basis of [Justin Trudeau’s] contention that [2015] would be the last first-past-the-post election.” NDP leader Jagmeet Singh is making a similar promise this time.

Wilson also said this election could hinge on who voters think will be best at leveraging a balance of power situation in a minority government.

“In terms of whether or not we’re going to see some of the action that’s being called for by our young people, and by everyone, on climate change, [that] isn’t going to happen unless there’s enormous pressure on whoever is the elected government.”

The Trans Mountain Pipeline and Woodfibre LNG project have been hot-button issues in the riding, and Wilson said the NDP’s position on Woodfibre is that “it’s a project underway and it won’t be stopped.”

The pipeline, however, is a different matter, since court challenges are continuing. “I think it’s a long ways from being something that’s going to happen and it’s something that our party does oppose.”

Wilson said so far the environment isn’t the top issue for voters as many expected heading into the campaign.

The NDP plans to address the housing affordability issue through programs to build 500,000 new rental units, supporting efforts to start housing co-ops, and going back to a 30-year amortization for mortgages to help reduce payments and put market housing within the reach of more people. The NDP is also proposing a federal foreign buyers’ tax.

“Those are the kinds of things we have to do – we have to impact the market substantially by our housing program, it can’t be a little drop in the bucket,” Wilson said.

Singh recently made a promise that could have a unique impact on coastal B.C. communities – a plan to increase the federal contribution to the BC Ferries service by $30 million, effectively doubling the subsidy from Ottawa.

Wilson said the cost of ferry travel has impacted every aspect of life on the Coast, and she’s happy to see her party taking ferries seriously as part of the national highway system.

Promises like housing and ferry subsidies are costly, and Wilson said the NDP would cover some of the cost by taxing the very rich.

And while she said she isn’t hearing about the environment and climate change as the number one issue for local voters, it is among the top concerns and Wilson sees the NDP’s proposals as “greener than the Greens" and part of a more complete package for progressive voters.

You can hear our full interview with Wilson at coastreporter.net/audio starting Oct. 3.