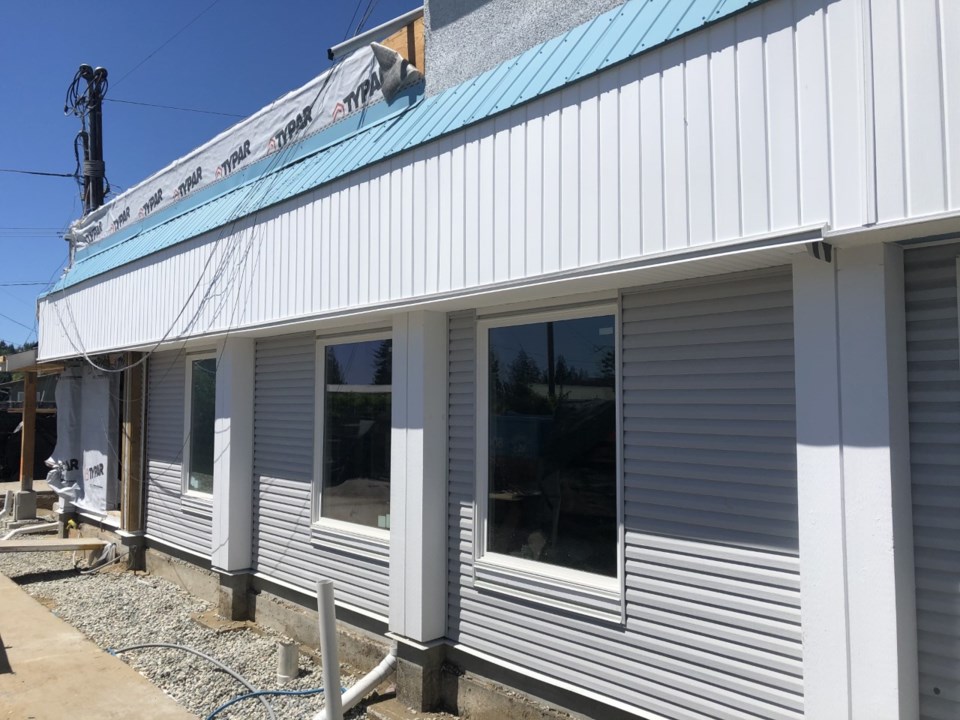 Work is underway to expand the shelter at 5653 Wharf Ave. in Sechelt.BC Housing photo

BC Housing has purchased the building that houses the Upper Deck shelter and is expanding its capacity, with renovations expected to be complete by the end of the summer, according to the organization.

The two-storey building at 5653 Wharf Ave. in Sechelt was purchased in 2019 for an appraised value of $1.64 million, and work is underway to expand the number of permanent beds to at least 35 from 20, including wheelchair accessible spaces on the first floor and dedicated spaces for women.

“We wanted to make sure that we were able to offer permanent shelter space in Sechelt,” Naomi Brunemeyer, regional development director with BC Housing, told Coast Reporter June 1.

Sechelt Mayor Darnelda Siegers said the expansion “is something we need.”

“The property is zoned for it, so in this case they’re just going ahead and building the spaces out as they can,” Siegers, who supports the location, told Coast Reporter.

She also noted the need for first-floor access was already known when BC Housing began leasing the second floor of the building as shelter space in 2017.

“The question the community would need to answer is: is it sufficient, and if not, where would we like to see potentially another facility or a different facility,” said Siegers.

Sunshine Coast Connections, which offered harm reduction services and an overdose prevention site out of the building, has been on hold for about a year due to the renovations.

Brunemeyer said the decision to purchase the building and expand the shelter was made because the Hightide supportive housing complex was full and didn’t meet the needs of all vulnerable Sechelt residents.

“It’s the need in the community that’s driving the response to continue the shelter operations. It’s certainly a service that’s necessary in the District of Sechelt,” she said.

An additional 10 temporary extreme weather beds will also be available at the site once renovations are complete. An active building permit has been issued by the District of Sechelt for a change of occupancy class.

The total number of available permanent beds hasn’t been established yet, however, because the government agency is also juggling 21 temporary spaces at the Cozy Court Motel at 5528 Inlet Ave.

When pandemic lockdown measures hit in March 2020, BC Housing entered into a contract with Royal Reach Motel at 5758 Wharf Ave. to provide 15 beds while physical distancing rules halved capacity at the Upper Deck shelter, but because of wheelchair accessibility challenges, and because the owner wouldn’t allow for self-isolation suites, the agency dropped that location in favour of two other motels: Blue Sky Motel in Davis Bay and Cozy Court.

People staying at the Royal Reach were eventually transitioned to the Gibsons supportive housing complex when it opened last March.

Now, Cozy Court is the only Sechelt motel in contract with BC Housing. Funding and the lease are set to expire next March.

BC Housing is leasing an additional two hotel suites in Gibsons for women and children at risk of violence.

As for public engagement, communication about the shelter expansion has been “much more neighbourhood specific,” said Brunemeyer, with outreach efforts by RainCity Housing focused on businesses and multi-unit buildings in the surrounding area.

With the location now permanent, Brunemeyer said meal programs, access to employment counselling, harm reduction services and health care will continue, as will a “strengthened relationship” with Vancouver Coastal Health (VCH), which will use amenity space in the building.

Through the pandemic BC Housing and VCH became aware that individuals, predominantly seniors with “complex behavioural issues,” were being discharged from the hospital “who were technically homeless,” said Brunemeyer, and as a result the agencies have worked to create five direct referral spaces at the Cozy Court.

“We’d like to see that partnership continue once the shelter is expanded,” she said.

Brunemeyer said BC Housing didn’t expect to see the 120 units of supportive housing from Powell River to Gibsons fill up as quickly as they have, adding it has been “shocking” to discover the Gibsons supportive housing project had a waitlist.

“All of the communities had more need than anyone anticipated,” she said, and the agency is concerned the pandemic “may have intensified” the risk of homelessness, especially among seniors.

Because of that, and with the expansion nearing completion, the agency plans to focus on the needs of more targeted populations, including seniors.

Mayor Siegers said the district had started long-term planning for homelessness housing in 2019 but those efforts were put on hold when the pandemic hit. Now, she said, “there’s a recognition that a long-term plan has to be put in place.”

Steering committee established to address Coast housing crisis
May 3, 2021 11:51 AM