It’s official – the windstorm to hit B.C.’s South Coast “was the most damaging storm in BC Hydro’s history,” according to a report released by the Crown corporation on Jan. 2.
Dec 21, 2018 1:54 PM By: Sophie Woodrooffe 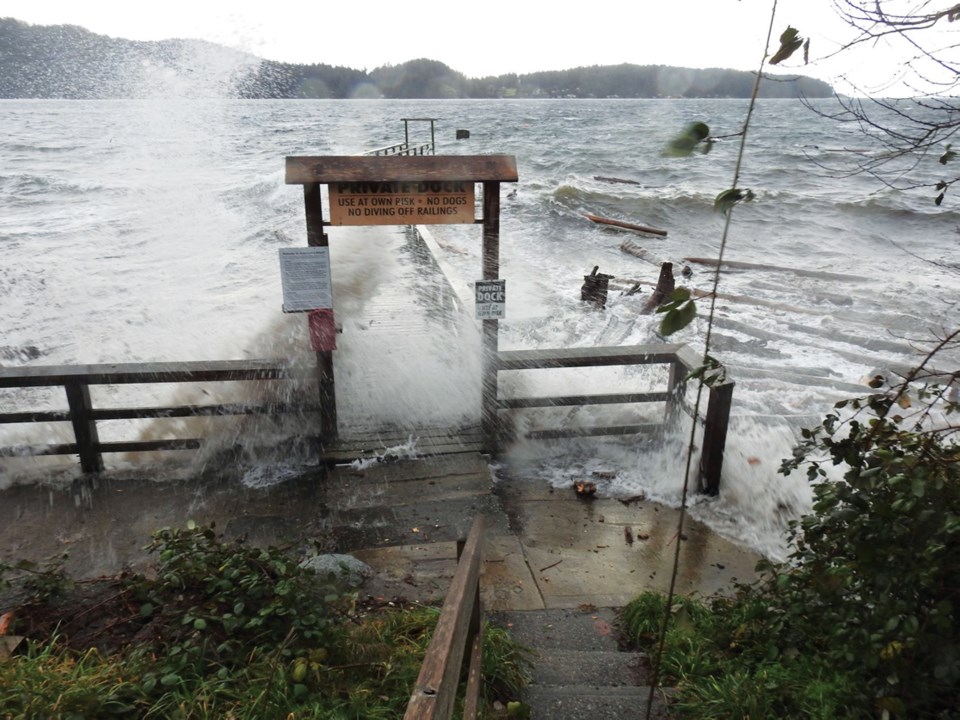 Granthams Wharf was among the infrastructure damaged by a wind storm that battered the Coast on Thursday, Dec. 20.Janet Ritchey Photo

It’s official – the windstorm to hit B.C.’s South Coast “was the most damaging storm in BC Hydro’s history,” according to a report released by the Crown corporation on Jan. 2. The storm caused more than 750,000 power outages, with Vancouver Island and the Gulf Islands the hardest hit – more than 80 per cent of households in those areas lost power.

The effect of the windstorm was exacerbated by a trifecta of factors. Heavy rain events preceded it, which destabilized trees, according to the report, and winds came from several directions with gusts reaching 100 kilometres per hour.

It took 900 field workers – “the single biggest mobilization of staff, contractors and resources in BC Hydro’s history” – and 11 days to completely restore the outages.

The effects were felt on the Sunshine Coast, with more than 7,700 customers losing power following the Dec. 20 storm. The high-wind event caused a road closure on Highway 101 north of the Pender Harbour Golf Course. “We had a significant number of trees down across the highway,” said Tyler Lambert of Capilano Highway Services.

The downed trees also impacted a hydro transmission line, which “was snapped and laying on the ground,” Lambert said. The road was closed for several hours while Capilano and BC Hydro crews cleared the roads and repaired the damage.

Fallen branches and minor flooding occurred across the Coast, including at Davis Bay, where a wind change in conjunction with a high tide caused road flooding and damage to District of Sechelt picnic tables and a bus shelter.

Gibsons Harbour’s float plane dock was separated from the wharf and the seawall walking surfaces at Coles Marina and Shoal Bay in the Gibsons area were also damaged by debris. Several trees fell onto the Helens Way trail between Stewart and Shaw Road. Areas of the trail were also washed out and debris from Georgia Beach was pushed up onto the road.

In Granthams Landing, waves carrying large logs knocked out three pilings on Granthams Wharf and shifted a 15-metre section by approximately three metres. It was “just hammered,” said Tony Bonnici, president of Granthams Wharf Association, who said the damage was “twice as bad as the worst we’ve ever seen.”

Bonnici estimated the repairs could cost between $20,000 and $25,000, which he said presents “a massive challenge” for the volunteer-run organization that owns and operates the wharf.

The wharf received the brunt of the damage between 2 and 4 p.m., when peak tides and winds caused a surge of 5.2 metres. “It was a combination of higher than usual waters, plus the wind,” according to Scott Tinis of Storm Surge B.C.

The Dec. 20 windstorm was one among a series of weather events to hit the Coast in December, causing damage to infrastructure and power outages, including a washout that dug “a big 10-foot chasm” into Russell Road, according to Tyler Lambert of Capilano Highway Services. The road remained closed as of Jan. 2 because subsequent heavy rainfalls have interfered with the replacement of the culvert and damage repairs. Lambert said crews were installing riprap protection for the new culverts and the project could be completed by Friday, depending on the weather.

More rain and wind was expected Jan. 2 due to a “vigorous Pacific frontal system” that was stalled across Vancouver Island and prompting Environment Canada to declare wind and rainfall warnings. Gusts of 70 kilometres per hour were anticipated and between 40 to 70 millimetres of rain were expected to fall by Thursday afternoon.