The Town of Gibsons is gunning for a federal COVID-19 infrastructure grant that would cover the cost to renovate a building it owns next to municipal hall.
Jan 25, 2021 4:33 PM By: Sophie Woodrooffe 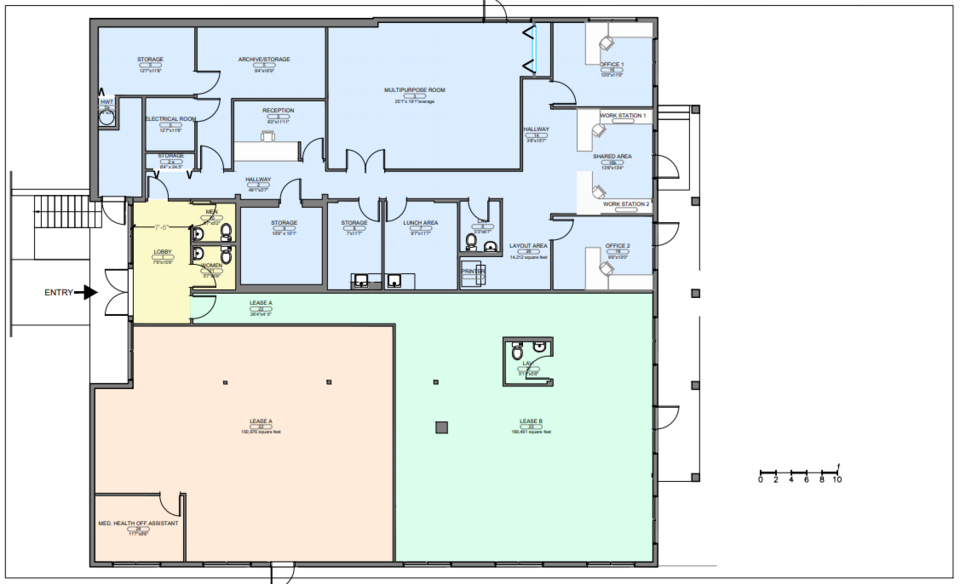 Plans for the renovation of 494 South Fletcher Rd. to accommodate a multipurpose room, more employee workspaces and archival storage.Town of Gibsons Image

The Town of Gibsons is gunning for a federal COVID-19 infrastructure grant that would cover the cost to renovate a building it owns next to municipal hall.

The COVID Resilience Infrastructure Stream would cover the estimated $316,234 project – the renovation of about half the lower floor of 494 South Fletcher Rd. to create extra Town workspace, a multipurpose room and what staff say is much-needed archival storage space.

A smaller unfunded proposal in the 2020 five-year financial plan was to construct an archive and training area at the site.

The revised project was broadened to also include a “much-needed addition of a COVID-friendly staff workspace” and exceeds the original budget of $145,000, according to a staff report from a special Jan. 25 council meeting to discuss the grant application.

As part of the staff recommendation, council has also committed to “any associated ineligible cost and cost overruns” and directed staff to move ahead with detailed plans for the project, expected to cost $60,000, using the Town’s share of COVID-19 safe restart funds.

Those detailed plans are needed, said infrastructure services director David Newman at the meeting, because the grant application would have to be shovel-ready and the project complete by the end of 2021.

About half the lower floor of the office space, which Vancouver Coastal Health (VCH) used to lease from the Town at a cost of $90,000 annually, was renovated in 2019.  A portion is being leased to the Sunshine Coast Regional Economic Development Organization (SCREDO) for about $20,000 annually, and a Tourist Information Centre occupies another section. The upper floor is used by School District No. 46.

Staff pitched the grant as an opportunity to do the work “with little or no cost to the Town’s taxpayers.”

As part of the proposal, room would also be made for more archive storage, which has been reduced because of a need for more staff workspace. Existing storage isn’t adequate long term, said corporate services director Lindsey Grist at the Jan. 25 meeting.

Additionally, the proposed multipurpose room at 494 South Fletcher could act as a local Emergency Operations Centre – which isn’t doable at Town Hall.

Newman said the bulk of the work “needs to be done regardless of the use of the building,” in part because of work left over from water damage sustained during renovations in 2019.

During discussion, Mayor Bill Beamish noted the crowding in the existing municipal workspace. “It is very, very challenging down there,” he said.

Coun. Stafford Lumley asked why the revised estimate is double the cost of the original project.

Newman said the original price was likely an underestimate and there were additional unforeseen associated costs.

Coun. David Croal said extending the space at Town Hall or renting other spaces for staff would likely cost more than the $90,000 in annual lease revenue it used to earn when VCH operated there. “The cost of $316,000 to provide space that we in turn would own, it doesn’t seem that unreasonable,” he said.

Lumley said he wanted to see a percentage limit put on cost overruns coming out of the COVID-19 restart funds budget. “I don’t want to plow through it in two months,” he said of the $1.5 million the Town received, suggesting a resolution that a maximum of 10 per cent of the project, or about $31,000, could be taken from the fund.

Councillors voted in favour of the addition.