The new board at the Sunshine Coast Regional District (SCRD) is going to be flooded with reports on water over the next five months.
Nov 27, 2018 11:09 AM By: Sean Eckford 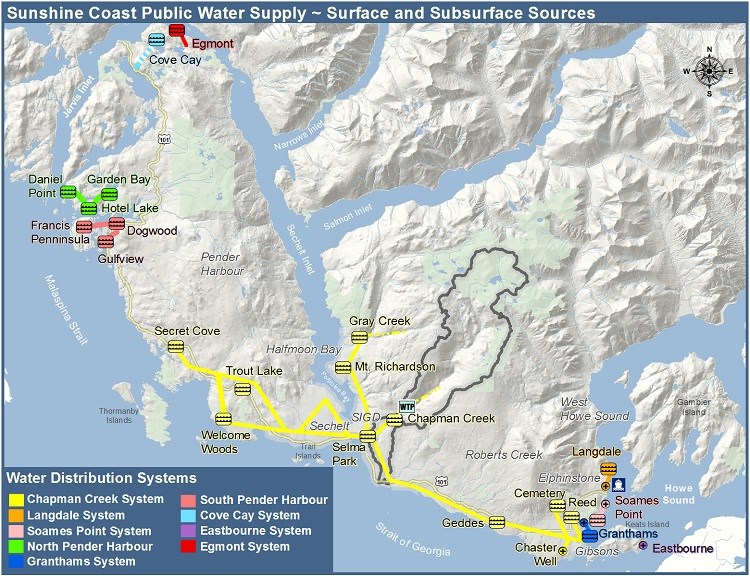 The new board at the Sunshine Coast Regional District (SCRD) is going to be flooded with reports on water over the next five months.

Water supply and metering were major election issues in the SCRD rural areas and the District of Sechelt, and in her first report as one of Sechelt’s two SCRD directors Nov. 21, Mayor Darnelda Siegers said there’s now a timeline in place for the key reports that will inform the decisions that need to be made before the next drought season.

“I know people are wondering what’s happening with wells, groundwater, et cetera,” Siegers said before giving a rundown of the timeline, which was originally presented to SCRD directors as part of their orientation sessions.

The timeline shows an updated analysis of water demand is expected in December.

The next major benchmarks are: January 2019 for the results of phase two of the groundwater investigation; February 2019 for a report on the Sechelt phase of the universal metering rollout; February 2019 for a feasibility study on a new reservoir; March 2019 for an update on provincial permits for the Chapman Lake project; and April 2019 for presentation of a “water sourcing policy.”

The SCRD’s original plan to pay for the meter installations in Sechelt and on shíshálh Nation territory through a long-term loan was defeated through an Alternate Approval Process (AAP) in July.

SCRD directors passed a motion before the election confirming a “commitment to the Universal Water Meter Program” and calling for a report on funding and implementation options in time for the 2019 budget deliberations.

The February target date puts that report after the first round of budget talks, but ahead of the expected opening of round two on March 4.

“Those are the dates right now that they are providing us with, and we wanted to get them before the public,” Siegers said.

The Town of Gibsons, meanwhile, is hoping to begin construction in 2019 on the infrastructure needed to supply Zone 3 in Upper Gibsons from the aquifer, instead of the SCRD’s Chapman system.

When asked by Mayor Bill Beamish, who represents the Town at the SCRD board, about the possible impact of the SCRD’s water plans, Newman said the Town would have an opportunity to comment if those plans include using a well that taps the Gibsons Aquifer because the SCRD would need a licence from the Ministry of Forests, Lands, Natural Resource Operations and Rural Development.

“We are an affected party, and you can guarantee we’ll have a thing or two to say about it,” Newman said, adding that while studies so far show enough water to supply the anticipated growth in Gibsons, the impact of having the SCRD drawing from the same source is unclear.

“It could potentially affect it. We may also find, as years go by and the aquifer continues to be monitored, that there is plenty of water for everybody – but we do not know that and we believe an abundance of caution is necessary and appropriate.”