A Sunshine Coast teacher was one of five selected from across B.C. by Corus Entertainment and the BC Teachers’ Federation (BCTF) for a campaign to celebrate teachers.
Mar 13, 2019 12:58 PM By: Sophie Woodrooffe 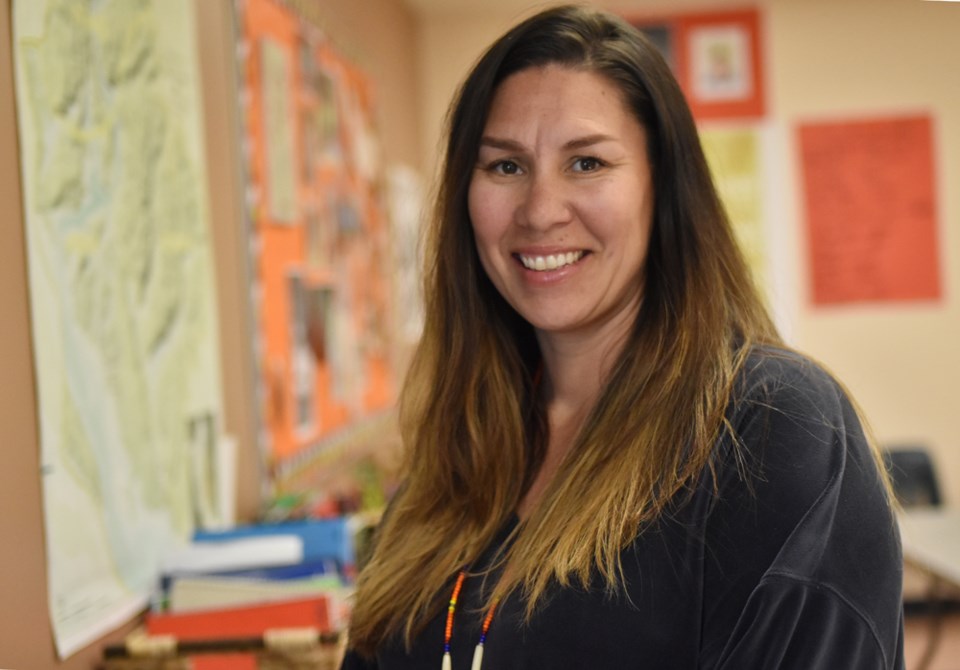 Rita Poulsen in her classroom at Chatelech Secondary School. She was one of five B.C. teachers to be recognized for her accomplishments by the BC Teachers’ Federation through a promotional series with Corus Networks.Sophie Woodrooffe

A Sunshine Coast teacher was one of five selected from across B.C. by Corus Entertainment and the BC Teachers’ Federation (BCTF) for a campaign to celebrate teachers.

Rita Poulsen teaches she shashishalhem to almost 200 students between kindergarten and Grade 12 at Chatelech Secondary School and Kinnikinnick Elementary School.

Poulsen was nominated by her aunt Audrey Santiago. The segment aired on Global News Morning BC in late February and included a live interview.

“We’re pretty excited about it,” said Poulsen, who said she learned she was selected through email. “It was a shock.”

Poulsen has been teaching at School District No.46 (SD46) for approximately 10 years, and before that worked with shíshálh Nation elders on language curriculum and other topics. Her aunt Donna Joe led the district’s language program for 25 years before she assumed the role.

“She’s been reviving our language for years with the help of the elders,” said Santiago, when explaining why she made the nomination.

The teachers’ union paid for the series as part of a sponsorship promotion with Corus Networks, which owns Global Television, CKNW and other media outlets. The public was asked to nominate teachers over a two-week period in January. A committee of representatives from Corus and BCTF selected five from more than 100 entries.

“What really stood out was the connection Rita was bringing from the Sechelt Nation to the classrooms and the fact that it was both having an impact in an elementary and high school, and that was unique to the submissions we got,” said Rich Overgaard, a BCTF representative who sat on the committee. “It was beyond just education. It was about language and that perseverance.”

Poulsen’s passion for teaching started early. She remembers wanting to be a teacher in third grade. Santiago recalls Poulsen declaring her desire to become a principal when Poulsen was in first grade. “I don’t remember that part!” Poulsen said from her teaching room at Chatelech.

Poulsen recently completed a two-year graduate program on nature-based experiential learning through Simon Fraser University, while simultaneously teaching language at SD46 and at Capilano University. A professor has encouraged her to apply for a master’s program, which would give Poulsen the credentials needed to achieve that Grade 1 dream.

For now Poulsen is focusing on her passion – teaching shíshálh language. She uses techniques that get students out of their chairs, and has introduced drumming and singing through the Tl’ikwem dance group, which she said instils students with confidence and pride in their culture.

Despite these efforts, Poulsen said her goal of reviving the language requires more resources and more time. “Kids in elementary school get me for an hour a week. That’s nothing,” said Poulsen, adding that intermediate and high school students get two hours of instruction weekly, sometimes three. “You can’t revitalize a language with that amount of time, there’s just no way,” she said.

Her “ultimate dream” would be to run a language immersion school. Several communities in the province are adopting that approach, such as School District 72 in Campbell River, which recently launched a pilot immersion program for children to learn kwak’wala. It’s happening in Hawaii, too, said Poulsen. On Friday she returned from a two-week trip to the Big Island to observe how Hawaiian is being revitalized through the education system.

Despite the uphill climb, signs of change are appearing on the Sunshine Coast. Since she introduced the dancing group, Poulsen has noticed that students are taking the “courageous” step of singing openly in front of family and students in high school. “You wouldn’t have had that a few years ago,” said Poulsen.

“That was a big eye opener for me… That pride they showed will hopefully carry them through.”