Results of a survey by Doctors of BC, the umbrella group representing doctors in the province, suggests doctors on the Sunshine Coast are much less satisfied with their working relationship with Vancouver Coastal Health than their colleagues in other
Nov 28, 2018 2:51 PM By: Sean Eckford 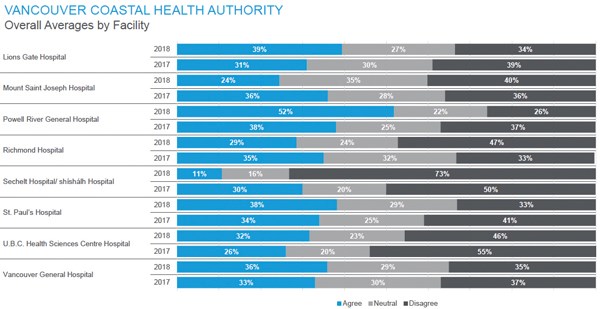 Results of a survey by Doctors of BC, the umbrella group representing doctors in the province, suggests doctors on the Sunshine Coast are much less satisfied with their working relationship with Vancouver Coastal Health than their colleagues in other areas.

Doctors of BC has conducted a Health Authority Engagement Survey for the past three years “to seek members’ views regarding their level of engagement and interaction with health authorities.”

Doctors participating in the survey were given nine statements and asked to say if they agreed, disagreed or were neutral. The results were broken down into several categories by health authority, rural/urban, facility and Division of Family Practice.

“One of the things that we do as doctors is to advocate for our patients to make sure that their care is the highest quality possible,” Doctors of BC president Dr. Eric Cadesky told Coast Reporter. “Having surveys like this allows us to work with health authorities to achieve that goal… This is about setting up the conditions so that doctors are able to perform their best.”

According to Doctors of BC, the provincial trend was toward more positive responses compared to 2017 on the statements about satisfaction, communication with senior leadership and transparency in senior leadership decision-making.

The Sunshine Coast results, however, are markedly out of step with both the provincial and Vancouver Coastal Health (VCH) trends, especially for Sechelt/shíshálh Hospital.

There were 27 responses from doctors associated with the hospital.

Sixty-seven per cent of them disagreed with the statement, “I am satisfied with this organization as a place to practice medicine,” up from 39 per cent in 2017.

The Vancouver Coastal Health average was 30 per cent disagreement.

Sixty-seven per cent also disagreed with the statement, “I have access to the facilities, equipment, and other resources I require to meet patients’ needs,” which is also a significant increase from 2017.

The average disagreement rate on that question across VCH was 34 per cent.

The most overwhelmingly negative response was to the statement, “Senior leaders’ decision making is transparent to physicians.”

And, while only 40 per cent of VCH doctors disagreed with the statement, “This organization values physicians’ contributions,” 81 per cent of the respondents linked to Sechelt/shíshálh Hospital disagreed. Last year it was 48 per cent.

Overall, responses for Sechelt/shíshálh Hospital were 73 per cent negative. The next highest average of negative responses at VCH facilities was for Richmond Hospital at 47 per cent.

Because the survey was anonymous and didn’t ask questions based on specific issues, it’s difficult to say what’s behind the large percentage of negative responses from the Sunshine Coast.

Local doctors have spoken out publicly on one issue over the past two years – overcrowding, which they say is directly linked to a lack of long-term care beds in the community.

In early 2017 a delegation of doctors told Sechelt council the hospital was well over-capacity and they felt the situation was “desperate” and could lead to unsafe conditions for both patients and doctors.

In January of this year, doctors with the Sunshine Coast Division of Family Practice wrote to Health Minister Adrian Dix, saying, “Thirty to 40 per cent of our hospital’s acute care beds are occupied by elderly patients awaiting placement in a long-term care facility. This is detrimental to the care of these elderly patients and the overcrowding is having a daily impact on our ability to safely provide acute care services to our population.”

VCH said in July that it was finalizing plans to open 12 short-stay beds for patients waiting to transition to long-term residential care.

“Vancouver Coastal Health is always working towards improving the collaborative relationship we have with physicians, especially in the Coastal Community of Care, where rural access and flow remains a strategic priority for us,” VCH public affairs specialist Matt Kieltyka said this week in response to the survey.

“We meet with physician groups nearly monthly and have established several working groups and advisory councils that are supported by physicians to ensure residents receive the best care possible throughout the health-care system.”

According to Dr. Cadesky, physicians were scheduled to meet this week to talk about the survey results.

“There’s certainly a lot of work that’s ongoing… The feedback is clear that the doctors in that area want to make sure that this is an area where people feel safe and well-supported and a place that doctors who are there want to stay there and work and that they’re able to attract new doctors,” he said.

The survey reports can be viewed online, here.