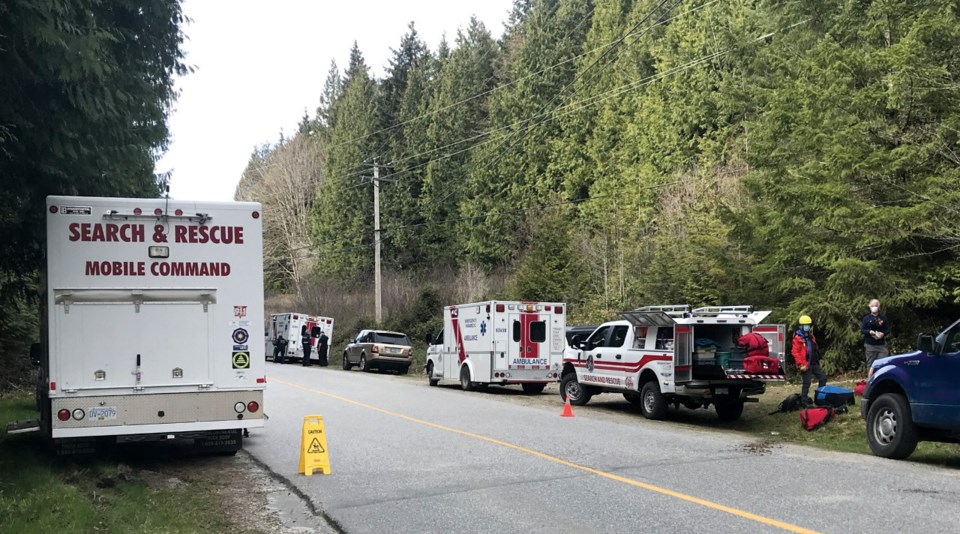 At the start of the Easter long weekend, more than 20 members of the Sunshine Coast Search and Rescue (SAR) team gathered near Porpoise Bay Provincial Park to help bring an injured mountain biker to a waiting ambulance.

SAR manager Alec Tebbutt told Coast Reporter the team was paged at 2:35 p.m. on April 2. Knowing they would be requiring ropes for the steep terrain, Tebbutt said, “When we were calling the team, I made a special point to say we need as many people as can come.”

The mountain biker, who Tebbutt said is local to the area, broke both bones in one of his lower legs while riding Huggies, a black diamond trail, according to Coast Mountain Bike Trail Association’s website.

Tebbutt said the team was able to locate the biker with the help of someone he was with, who could speak with SAR by cell phone. SAR’s medical director, Dr. Paul Dhillon, was one of the first volunteers to reach the injured male.

“It was a steep enough trail that we had to use rope systems to lower the stretcher safely down the trail and got him out to the ambulance at 3:50 [p.m.], which is pretty good time, just an hour and a quarter or so after we first got contacted,” Tebbutt said.

During the rescue, one of the SAR members slipped and tore a tendon, so he also had to be taken out on a stretcher and brought to the hospital.

Tebbutt said it’s very rare for a SAR member to be injured during a rescue.

“I’ve been with the team for 20 years, and we’ve probably had four maybe, and none of them particularly seriously. This is one of the more serious because he said he actually had to have surgery,” Tebbutt said.

Besides the Friday rescue, Tebbutt said it was a quiet weekend for Sunshine Coast SAR. This year, he said, the call volume is about 50 per cent above normal, with more calls for people feeling despondent or who have Alzheimers or dementia.

“I think because of the stress of the time, people are wandering off more,” he said.

On April 3, Emergency Management BC said the 79 ground search and rescue (GSAR) teams across the province wrapped up their busiest year on record.

“Between April 2020 and April 2021, B.C.’s GSAR groups were deployed 1,959 times. This is an increase of nearly 25 per cent when compared to callouts in previous years,” the press release said. “Prior to this, B.C.’s GSAR groups attended an average of roughly 1,500 responses annually – more than the rest of Canada combined.”