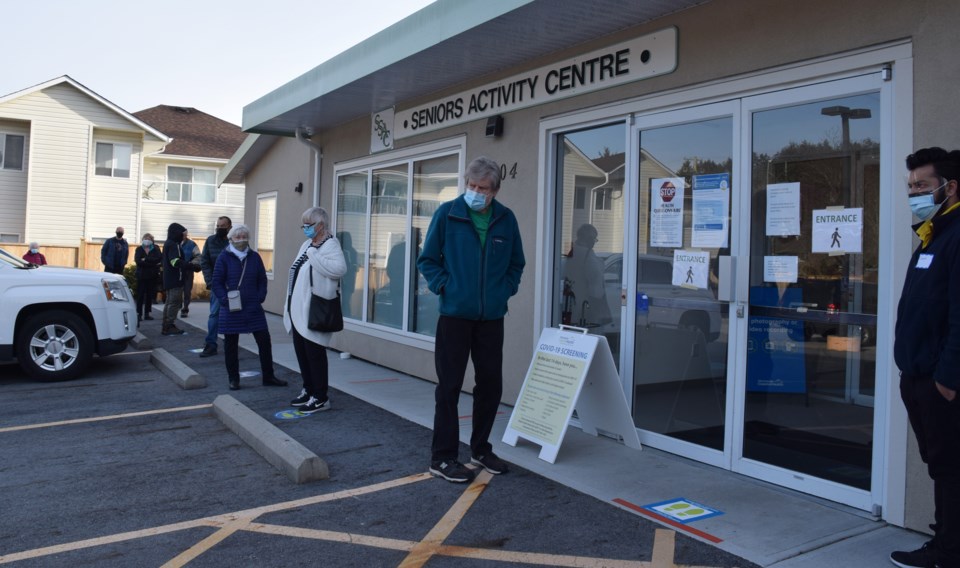 Sunshine Coast residents line up for a COVID-19 vaccination outside of the Seniors Activity Centre in Sechelt on March 17.Keili Bartlett

Some Sunshine Coast residents eligible for a COVID-19 vaccine say they’re being sent off coast for their shot because clinic bookings are full, while the number of sites offering vaccine for the general population on the Sunshine Coast has shrunk from three to one.

Residents reported this week they were unable to book appointments online or through call centre agents for Vancouver Coastal Health’s (VCH) booking hotline, and instead were given options to schedule appointments off Coast, including in West Vancouver, North Vancouver and about 700 kilometres away, in Golden, B.C.

That includes Diamond, who was told the day she received her notification to book that there was no availability on the Sunshine Coast and that she would have to try another city. “I just couldn’t believe it,” she told Coast Reporter.

Neither could public health officials when Diamond called to explain she was being directed to travel outside her community for a vaccine.

“We do have sufficient local capacity to immunize all Coast residents at our vaccination clinics, so we would encourage everyone to stay on the Coast and receive their vaccines locally,” he said in an April 13 email. “We are working to address the issue of local residents being booked off-Coast for their vaccinations.”

However, in an emailed response to questions about availability and options for off-Coast booking, VCH told Coast Reporter, “Eligible residents on the Sunshine Coast are welcome at all available clinics across VCH.”

Diamond, who is anxious for a vaccine so she can offer respite to her sister who’s caring for their 93-year-old mother, said she ended up scheduling an appointment for next week in North Vancouver.

“I want to be able to go and help out. I really want to get my shot,” she said, adding she would be willing to wait if she knew there would be availability, “but nobody seems to have an answer.”

Another answer officials haven’t provided is whether ferry travel to access vaccine would be covered under BC Ferries’ Travel Assistance Program. Diamond said she asked, but “nobody seems to know.”

Patrick Crawford, who retired to the Sunshine Coast after 30 years working as a pharmacist, described the VCH booking system as “somewhat of a disaster,” after he too was forced to take an appointment in West Vancouver because nothing was available the day he received his notification to book.

Crawford’s wife was able to schedule an appointment, but when the 65-year-old tried to book his, he was told to keep trying or take an appointment in a nearby community.

“You would expect, if the system works properly, that when you’re given an invitation to go in and book your appointment, it’s because there are spots open in your community.”

Crawford said his decision to book at a West Vancouver clinic was born out of both frustration and necessity, since he has upcoming essential travel plans for the Lower Mainland.

“I would have probably happily booked sometime in May, if there were any dates even showing up in May,” he said.

Meanwhile, two COVID-19 vaccination clinic sites on the Sunshine Coast have closed as of March 30, leaving the remaining site in Sechelt as the only option for the general population seeking immunization outside of the Pharmacy program, according to Spithoff.

“All vaccination clinics will be out of the Sechelt location moving forward,” he said, adding he believed the decision to close the two locations was made to “maximize our efficiency and the number of vaccinations we can do with the resources we have.”

In March, VCH established clinics at Madeira Park Legion Branch 112 and in Gibsons at Legion Branch 109, but neither of those locations were included in an update listing clinic dates in April.

Instead, two clinic dates have been set for what’s now the only site on the Sunshine Coast – the Sechelt Seniors Activity Centre on Trail Avenue.

Two dates are available for the rest of April for eligible residents, according to the VCH website, April 15 and April 27, though some residents say they’re unable to schedule appointments.

In an email to Coast Reporter, VCH said as it “works through vaccinating residents based on the age cohort system, we may open additional clinic dates on the Sunshine Coast. This will be based on community needs, and clinical and operational feasibility,” and referred Coast Reporter to its website for updates.

The AstraZeneca vaccine is also available at participating pharmacies on the Sunshine Coast for people between the ages of 55 and 65.

In an update to the community on April 1, task force doctors said at least 7,100 vaccinations had been administered on the Sunshine Coast, with more than 95 per cent of people aged 80 and older receiving a shot, higher than the provincial average.

The Lower Sunshine Coast, with a population of about 30,000, is the largest of the rural communities in the VCH region with one clinic site offered.

Other clinics are listed on VCH’s website at sites in Squamish, Whistler, Pemberton, Bowen Island, Powell River and Texada Island.

Spithoff said the timing of clinics is determined by vaccine availability and supply, and decisions about supply and allocation fall to a provincial immunization task force.

“Our local task force continues to advocate for local vaccinations to happen as quickly and as efficiently as possible,” he said.

VCH, meanwhile, said it is “committed to ensuring all Sunshine Coast residents who are deemed eligible for vaccination will have the opportunity to get their vaccine.”