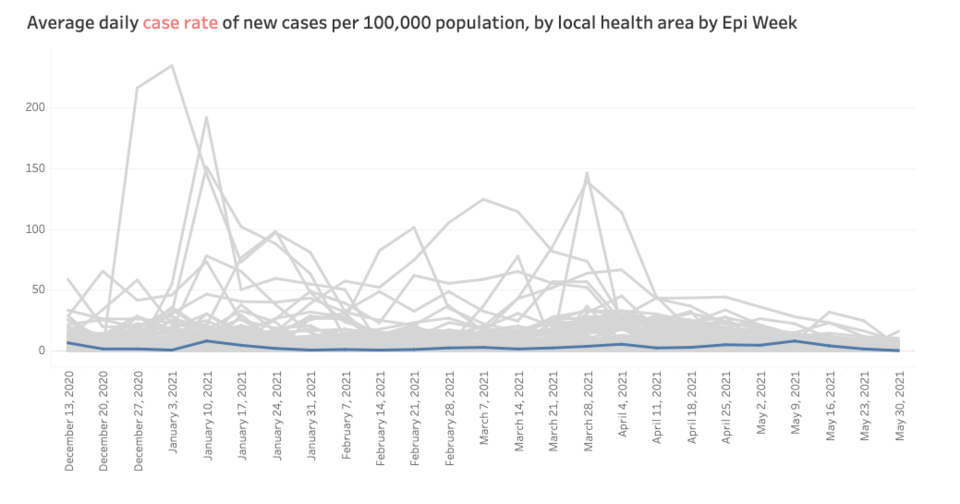 No residents tested positive for COVID-19 on the Sunshine Coast from May 30 to June 5.

The seven-day period marks the first without reported cases since the BC Centre for Disease Control (BCCDC) began releasing data on a weekly basis for local health areas at the end of last November.

Further, the average daily rate of new cases per 100,000 was at zero on the Sunshine Coast from June 1 to June 7, according to BCCDC data.

For the May 30 to June 5 period, zero cases were also reported in Powell River, while the Howe Sound local health area reported three cases.

Cases are mapped by location of residence, while out-of-province cases and those with unknown residence aren’t included with BCCDC’s weekly case maps.

The May 30 to June 5 period is the third week in a row that cases have dropped on the Sunshine Coast, after hitting a four-month high the week starting May 9, when 18 cases were reported.

The last time the Sunshine Coast saw numbers close to zero was in February, when one case was reported for the week of Feb. 14 to 20.

Between January 2020 and the end of May, 238 cases of COVID-19 were reported by the BCCDC on the Sunshine Coast, compared with 94 in Powell River and 2,885 in Howe Sound, which includes the communities of Pemberton, Squamish and the hard-hit municipality of Whistler.

As of June 7, 74 per cent of people age 12 and older on the Sunshine Coast have received at least one dose, compared with 71 per cent in Powell River and 78 per cent in Howe Sound.

The rate for those in the 50 and older age category hit 85 per cent on the Coast, compared with 83 in Powell River and 86 in Howe Sound.

Vancouver Coastal Health targeted Whistler with a widespread immunization campaign in April during the third wave, when transmission rates were among the highest in the province.

Provincial health officer Dr. Bonnie Henry and Health Minister Adrian Dix on June 9 said 74.5 per cent of all adults in B.C. and 72.4% of those 12 years old and older have had at least one dose.

– with files from Glen Korstrom