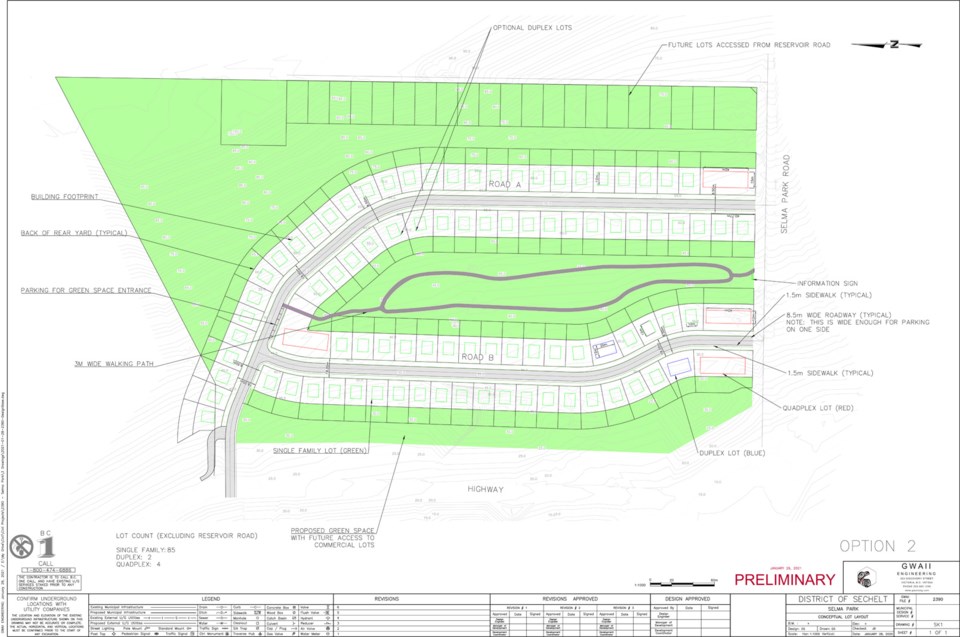 Selective logging at a proposed subdivision in Selma Park has been delayed after an environmental study resulted in the discovery of an eagle’s nest and other bird nests.

An environmental review of the area began in April and was completed in May, with cutting expected to take place afterwards.

Sechelt Indian Government District (SIGD) manager Peter Jmaeff told Coast Reporter work at the site of the subdivision is now expected to resume in August, once a biologist reviews the area and confirms the birds have left.

In the meantime, a survey is underway to protect forested areas and significant trees.

“At the same time, we’re trying to save as many of the trees as we can. We don’t want to go in there and just chop everything down, so we’re being very selective and trying to preserve the greenspace between the two roads.”

Harvested cedars are expected to be used for cultural purposes by shíshálh Nation members.

Selma Park Road will also be widened as part of the project, with that work, as well as modifications to Monkey Tree Lane and excavation of the subdivision site, starting once logging is complete. Road widening is intended to accommodate local traffic and access into the subdivision.

Engineers are working on drawings and work is underway with the Ministry of Transportation (MOTI) and traffic engineers to ensure adequate access into the subdivision, said Jmaeff.

Engineers are also looking at whether any modifications to the highway will be required.

The subdivision is expected to be built in three phases, and shíshálh Nation council has decided on moving ahead with phases one and two, which involve building new roads and a new access into the property, along with the total 92 lots.

The third phase will involve development along Reservoir Road, but there is “no immediate decision as to when that’s going to happen,” Jmaeff said.

Hiwus (Chief) Warren Paull told Coast Reporter demand for housing has been on the rise, with more than 150 names on a waiting list. Of those, 34 are expected to be housed at the six-storey Our House of Clans development at 5573 Sunshine Coast Hwy. expected to be completed in the spring of 2022.