A 16-year-old Chatelech Secondary student was hoping the genetic testing kit she got for her birthday would reveal new information about her health – instead, it revealed she has two sisters.
Jan 6, 2020 5:20 PM By: Sophie Woodrooffe 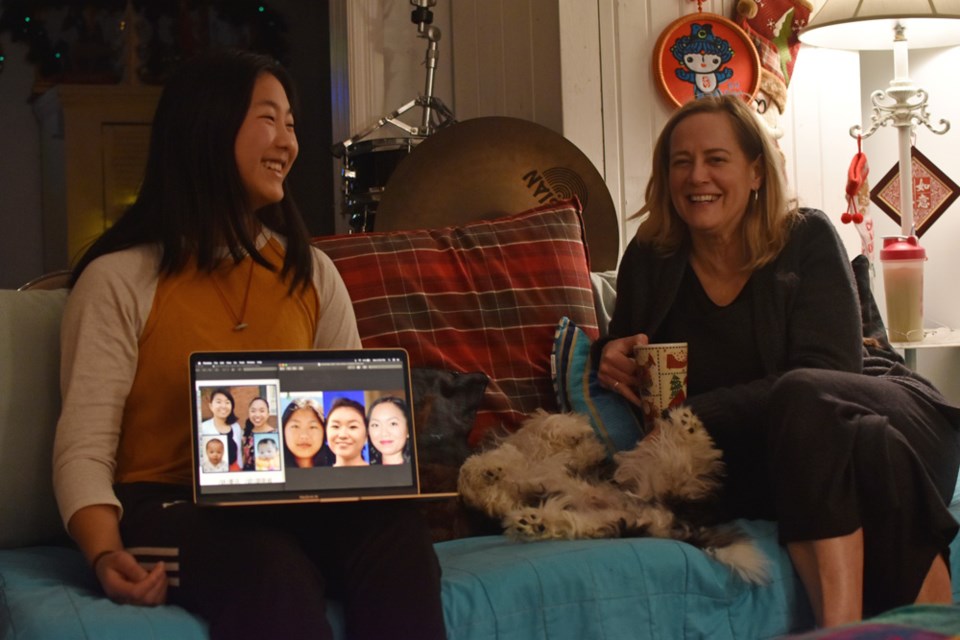 Lisa Rae (right) and Abby Grunenberg, with photos of herself and her new sisters, at their home in Sechelt.Sophie Woodrooffe

A 16-year-old Chatelech Secondary student was hoping the genetic testing kit she got for her birthday would reveal new information about her health – instead, it revealed she has two sisters.

“I didn’t really expect siblings out of this,” said Abby Grunenberg. In November her friends gave her money to purchase the kit. On Dec. 17 she received the results through email during math class.

“I told my friends, because they were sitting beside me, and they were just as excited as I was,” said Grunenberg. “For the entire day I was trying to figure out more about them… It was crazy.”

Grunenberg was adopted from China when she was 11 months old and has been living on the Sunshine Coast ever since. She never suspected she had biological siblings, or that their lives would follow a similar trajectory.

Her biological sisters, Carmen Chan and Olivia Maggioncalda, discovered each other three years ago, also through DNA testing. They, too, were adopted by North Americans, and live in Iowa and Virgina, respectively. “Because there’s three of us, it’s quite rare for that to happen,” said Grunenberg.

Ironically, the kit “didn’t find much” about Grunenberg’s health – the original reason she ordered it.

The sisters and their parents have connected through video chat and are hoping to meet next November, when Grunenberg’s family plans to visit Boston.

Initial conversations have revealed they have the same biological mother and father, were all born in the fall, originate from the same region, are 16, 17 and 18, share certain allergies – and a unique distaste for a particular tropical fruit.

“Apparently, we all hate bananas,” said Grunenberg. Both sisters asked her to confirm that one.

The sisters have also been sharing information about their past.

Grunenberg was discovered on a city street in the province of Hubei, China when she was three days old. She has never known what events led to her adoption. “And same with my two sisters, as well – it was the same circumstance. Nothing left behind,” said Grunenberg. “It reopened questions, because I didn’t really think about it, but now it’s more like, what really happened when I was little?”

Grunenberg’s mother, Lisa Rae, admitted “it’s all just conjecture,” but they are piecing together fragments of the sisters’ histories. One theory suggests the girls, who were born in close proximity to each other, were put up for adoption by a rural couple who may have been trying to conceive a boy while home from working in factories in the neighbouring province of Hunan, during Spring Festival. Given the girls were born around the same time, “it kind of works,” said Rae.

The unexpected results have also led to more testing. For Christmas, Rae purchased a DNA testing kit for her older daughter, Haley, who was also adopted from China.

“It’s a connection from a far away country that we assumed was lost forever,” Rae told Coast Reporter. “What are the chances? Higher than we thought, apparently.”