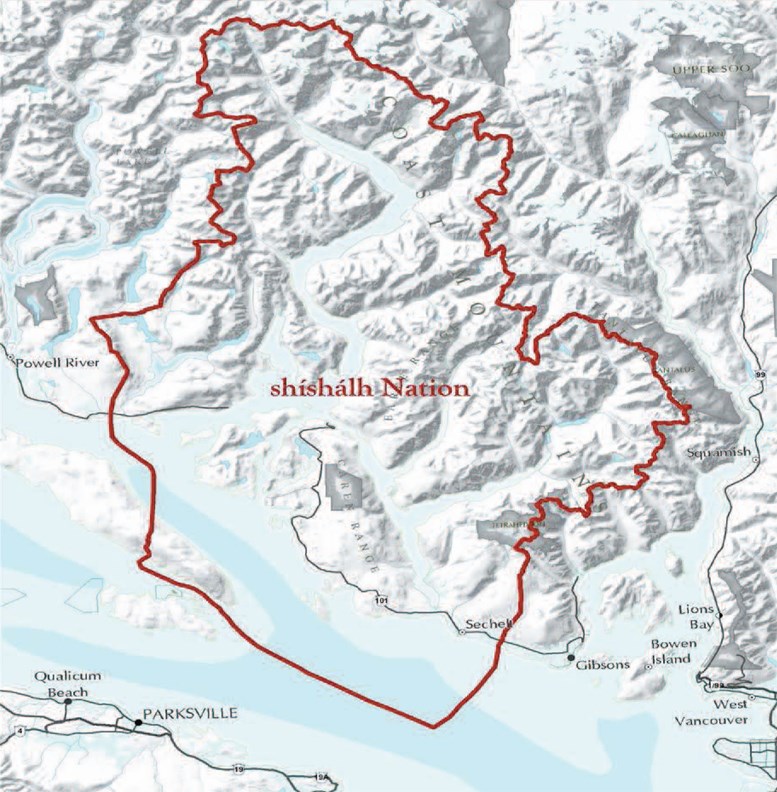 Sechelt Nation’s traditional territory stretches from Roberts Creek to halfway into Powell River on the Saltery Bay side and amounts to hundreds of thousands of hectares.BC Government Map

The shíshálh (Sechelt) Nation has signed three agreements with the province that will see them get about 288 hectares of Crown land, a share of provincial forestry revenue of up to $484,137 per year, and $100,000 in capacity funding – and that’s just the beginning, both parties agree.

The Nation has signed a reconciliation agreement, an interim forestry agreement and a government to government agreement with the province that will grant them certain rights and territory now, while leaving the door open for more negotiations in the future.

The parcels of land included in the reconciliation agreement represent 148 hectares split between both sides of the head of Narrows Inlet, 100 hectares at the southwest mouth of Salmon Inlet and 40 hectares on the west side of Sechelt Inlet dubbed the Egmont Parcel.

All of the parcels will be transferred to the band as fee simple as early as possible with Egmont being first in the queue, according to the province.

“There are a number of procedural steps and approvals required by the province prior to transfer of the lands to shíshálh,” an emailed response from the government stated.

“B.C. will work as quickly as possible to expedite this work, in order to complete the commitments made under the reconciliation agreement.”

Minister of Aboriginal Relations and Reconciliation John Rustad said the reconciliation agreement is “just an initial stepping stone” toward more talks and future agreements with the Sechelt Nation.

“I think issues like the Chilcotin (Tsilhqot’in) case, or the William case as it was known, as well as Section 35 Rights and Title, are issues that need to be addressed,” he said.

He suggested much more land could come under control of the Sechelt Nation in the future, as was the case with the recently signed Tla’amin Nation treaty, which afforded that Nation control over more than 8,300 hectares of land near Powell River.

“When you look at just up the Coast with Tla’amin and their final treaty agreement being implemented, and the scope of land that went under control of the Tla’amin Nation, I can expect that there will be more discussions around land [with the Sechelt Nation],” Rustad said.

“I don’t know to what extent that will be, but clearly this is something that Sechelt is interested in and it’s something that we work on whether we’re in treaty or potentially even outside of treaty.”

In an interview this week, Chief Calvin Craigan made it clear that he does not want to see Sechelt Nation under any treaty agreement.

He said the 8,300 hectares of land offered to the Tla’amin through their treaty represents only about 10 per cent of that Nation’s total territory, and that Sechelt will be seeking control of all of its territory through either future agreements with the province or through the courts.

Craigan said the Nation’s territory stretches from Roberts Creek to halfway into Powell River on the Saltery Bay side, and that it would amount to hundreds of thousands of hectares.

“It’s immense,” Craigan said, adding that he hoped to get the land issue settled by December if possible.

“We know there’s an election coming up in the spring, and we don’t want to run this for another four years. We want to get those elements included and the plan laid out before anything else happens with their government.”

The government to government agreement sets out a timeline and framework for future negotiations and the penning of a long-term reconciliation agreement that will help “address particular outstanding matters.”

These include transfers of land to the Sechelt Nation, development in and around Pender Harbour (including the dock management plan) and land and resource agreements respecting forestry, revenue sharing and shared decision making. All elements are to be concluded within the next six to 24 months.

The agreement states there will be a study of environmental impacts of docks in Pender Harbour and an archaeological inventory done in accordance with the Penner Report. It also says the province will proceed with short-term (up to two years) modification agreements to extend the tenures for up to 321 existing tenured docks in Pender Harbour.

After all the studies are done and a review has taken place, the province and the Sechelt Nation will finalize the dock management plan and create a shared decision-making agreement concurrent with the plan.

If the parties can’t reach an agreement, however, the reconciliation agreement could be terminated by the province under a clause on page nine.

The three agreements signed with the Sechelt Nation can be read in their entirety at http://ow.ly/naYO302n1hz