With unanimous support from the District of Sechelt, the Sunshine Coast Community Services Society (SCCS) is looking to tackle the next major hurdle as it moves ahead with its women’s affordable housing project: money.
Apr 29, 2021 11:32 AM By: Sophie Woodrooffe 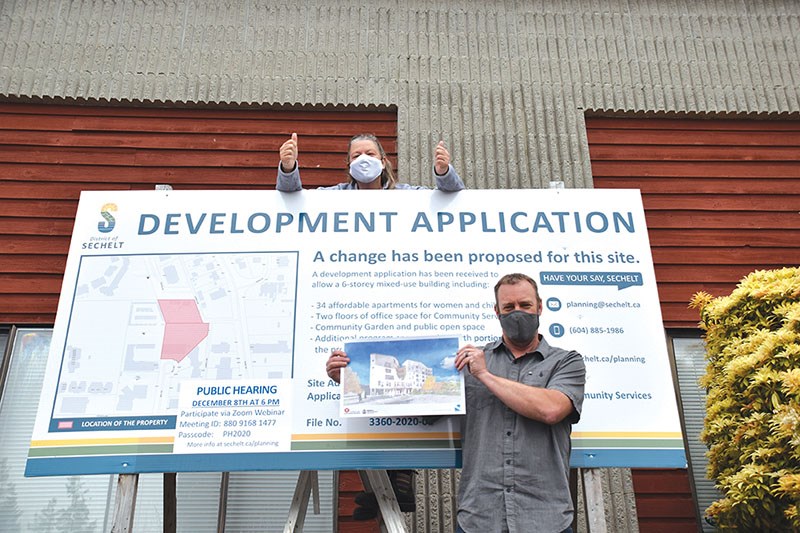 With unanimous support from the District of Sechelt, the Sunshine Coast Community Services Society (SCCS) is looking to tackle the next major hurdle as it moves ahead with its women’s affordable housing project: money.

On April 26 the organization launched Building Together, a fundraising capital campaign to raise a total of $3 million through community donations towards the $23-million project that is set to get underway this winter.

In January, District of Sechelt council gave unanimous third reading to zoning bylaw amendments for the six-storey building, which will be located on 5638 Inlet Ave., with 34 rental residential units over four storeys for women and children affected by violence, including transgender women, as well as youth transitioning out of care, managed by SCCS, and two floors of office and programming space.

BC Housing has committed to covering the cost to build the four floors containing the housing units, SCCS capital campaign manager Sandra Cunningham told Coast Reporter, and the organization is seeking a further $7 million in community donations and grants to construct the first two floors, which will bring the majority of its Sechelt programming to the space.

For the Building Together campaign, about $412,000 of the $3-million goal has already been donated by community members, said Cunningham. The SCCS has also received a pledge from an anonymous donor “to match every dollar donated up to $200,000,” the release said.

As for the $4 million in grants, the SCCS has received $250,000 in provincial funding to build a commercial kitchen for the space.

“We are delighted to be launching our campaign from a position of strength, with over $662,000 contributed so far from donors and grants,” said executive director Catherine Leach in a news release.

The organization hopes to raise enough funds to be mortgage-free so that revenues can be used instead to run programs, said Cunningham.

Sunshine Coast residents will be prioritized for the affordable housing units as well as “those who were forced to leave the Sunshine Coast but who still have family and support networks on the Coast,” according to the SCCS.

Community gardens will also be developed as part of the project.

“The building entrance will face the well-designed gardens, creating a safe space for our residents, staff, clients and volunteers to gather,” said Leach.

As for male visitors, BC Housing told Coast Reporter in a statement that because the development will provide long-term rental housing, there will be no restrictions on who is allowed to visit the building. “Long-term residents can determine themselves which guests they do and do not want to accommodate,” said the statement, and guests are permitted to stay for 14 days without written approval from a property manager.

Information on the project as well as how to donate can be found at: buildingtogether-sccss.ca