Some residents of Sandy Hook whose homes border an area being logged as a private managed forest say the logging, which started more than a year ago and is mostly complete, is putting their neighbourhood at risk.
Mar 19, 2019 2:58 PM By: Sean Eckford 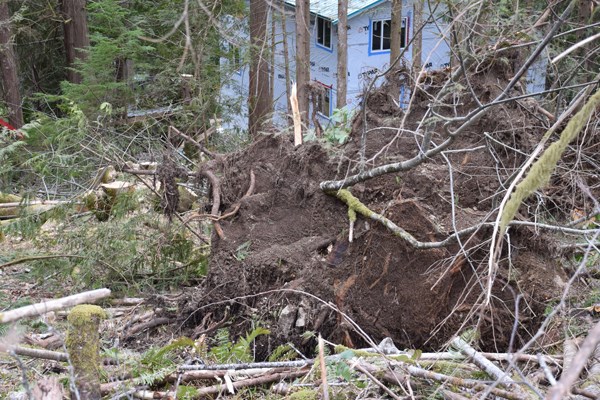 Blown-down trees in a buffer zone near homes, along with soil erosion and slash piles, have prompted fresh complaints from Sandy Hook residents about Managed Forest 503 in Sechelt.Sean Eckford Photo

Some residents of Sandy Hook whose homes border an area being logged as a private managed forest say the logging, which started more than a year ago and is mostly complete, is putting their neighbourhood at risk.

The residents first went public with their complaints about Managed Forest 503, near Seaview, Skookumchuck, and Mt. Richardson roads in 2018. The property is owned through a numbered company, 0990199 B.C. Ltd., that lists Kin Kwok Chung of Anmore as a director.

• The logging, even with a buffer zone, has left too few trees to act as a windbreak resulting in trees falling onto neighbouring properties. “To date, six trees have fallen onto three residential properties with two trees actually making contact with a home or outside structure,” the letter said, and several trees are leaning “with potential to fall onto residential properties [in the] next wind storm or snowfall.”

• The logging has led to increased soil erosion with runoff that “has resulted in property flooding requiring excavated culverts and increased running water on roadways” and possible damage to septic systems.

• And, that the logging practices have led to an increased risk of fire “from extensive slash and stockpiled logs as well as increased evaporation of logged soil.”

Rowan’s letter goes on to express frustration over “failed government intervention and community consultation” and concerns the property will now be developed without a proper plan.

The District of Sechelt responded to the 2018 complaints with a statement that said while it shared “the concerns of our Sandy Hook citizens,” it “no longer has any authority in this matter and all control over the land falls with the Private Managed Forest Council.”

A formal complaint was also filed with the Managed Forest Council (MFC) in early 2018, but the MFC’s 2018 inspection program report said there were “no compliance issues noted” for Managed Forest 503.

The Ministry of Forests, Lands, Natural Resource Operations and Rural Development sent an emailed response to Coast Reporter’s request for comment on the Feb. 13 letter.

It said because the land is regulated under the Private Managed Forest Land Act, the Managed Forest Council remains responsible for monitoring compliance with the regulations.

The ministry email said ministry staff “will be contacting District of Sechelt staff to discuss overlap of bylaws with the act and regulation and the possibility of further response” and that “natural resource officers are currently working with BC Wildfire Service to determine if any contraventions of the Wildfire Act and Regulation have taken place on the property.”

“The Province wants to ensure that the private managed forest land regime is meeting key public values and is addressing concerns raised by the public regarding access, watershed planning, slope stability and riparian area management,” the statement concluded. “The ministry will be reviewing the effectiveness of the private managed forest land framework this spring.”

Powell River-Sunshine Coast MLA Nicholas Simons said he worked to bring the residents’ concerns to the attention of the minister, and he’s glad to see a review of the Private Managed Forest Act that will include looking into how complaints are addressed is going ahead.