A virtual public meeting has been scheduled by BC Timber Sales (BCTS) for June 25 to review cutblocks planned for the Egmont area.
Jun 18, 2020 9:46 AM By: Sophie Woodrooffe 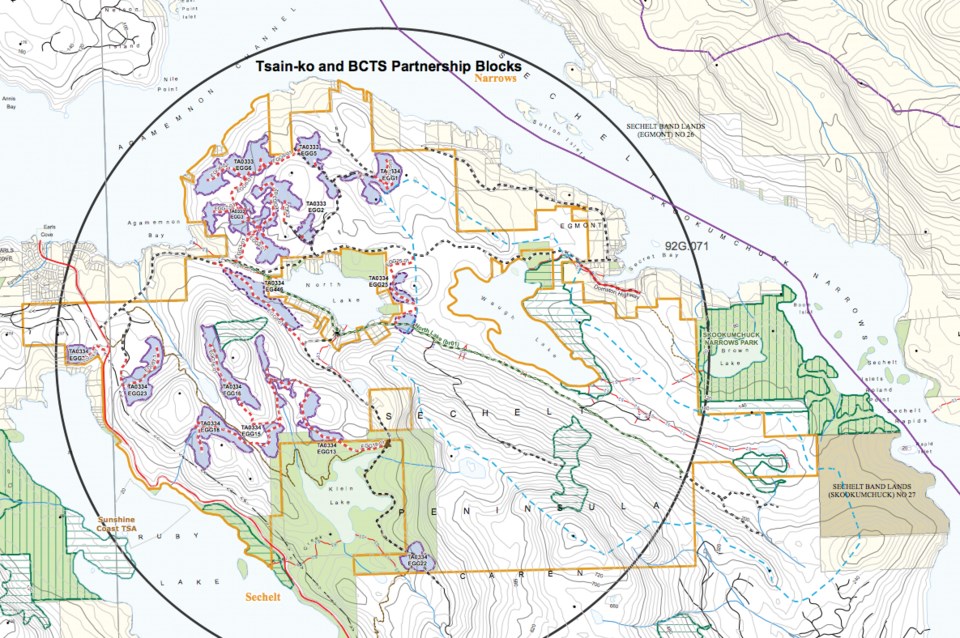 A virtual public meeting has been scheduled by BC Timber Sales (BCTS) for June 25 to review cutblocks planned for the Egmont area.

Comment period for the 2019-23 BCTS operating plan for the Sunshine Coast closed last June, but “it was clear additional community engagement was necessary,” according to a letter from BCTS planning forester Amanda Girard, announcing the meeting in a June 15 email.

BCTS is a provincial agency that manages about 20 per cent of the province’s annual allowable cut on public land and auctions licences to harvest. Tsain-Ko, a forestry development corporation owned by shíshálh Nation, has been awarded a licence to harvest 75,000 cubic metres of timber in a five-year period.

“Now that this step in the consultation process is complete, we are preparing and planning for a public consultation meeting on the evening of June 25,” Girard wrote.

Representatives from both community groups asked BCTS to hold the meeting at a later date because 10 days wasn’t enough notice, and would exclude people in the Egmont area from joining, since some residents lack cellphone and Internet service. “People feel the consultation is too soon,” said Rick Craig, president of the North Lake Residents’ Association.

Tom Johnson, woodlands manager for BCTS Chinook Business Area, confirmed with Coast Reporter that the meeting would move ahead as planned, since people can access the meeting using their phones.

The operating plan has sparked serious concerns for residents, including Craig, who has owned a cabin on North Lake for 30 years. “In the time I’ve been there, there’s been nothing like this,” he told Coast Reporter. “It’s an enormous amount of logging.”

The maps have been amended since the three initial meetings. Originally, 20 cutblocks were listed as “development ongoing” in BCTS’s operating plans, with 17 slated to be harvested in 2020, covering 134 hectares. The remaining cutblocks, comprising 51 hectares, were scheduled for 2021.

Some blocks were clustered around North Lake and east of Ruby Lake. Others edged Klein Lake and Skookumchuck Narrows Provincial Park.

BCTS removed the cutblocks from the Skookumchuck area, but have added cutblocks in the North Lake area, compounding concerns over possible impacts to drinking water.

Craig said his association wants to create a water-monitoring proposal but is waiting on a hydrology report from BCTS.

Johnson told Coast Reporter the report is underway and “will be available shortly.”

“We have committed to all the groups we have met with that we will provide the hydrology report,” he said.

Another resident, Adi Bunim, who is not represented by the community groups, says that even though the redrawn map means cutblocks are now “dangerously close” to his and others’ properties, BCTS never notified them about the change. Those blocks include Timber Sale Licences TA0333 and TA0334, near Agamemnon Channel. According to Johnson, BCTS is hoping to advertise TA0333 in August.

BCTS has modified some roadways to reduce the amount of traffic near residential properties.

Residents remain concerned about the impact on the surrounding ecosystems, waterways and on the tourism industry.

BCTS acknowledged it has “received a high volume of emails and is still working on responding.” It has posted a frequently asked questions page at www2.gov.bc.ca/assets/gov/farming-natural-resources-and-industry/forestry/bc-timber-sales/updates-information-releases/tch_faq_sheet_northlake_16june2020.pdf