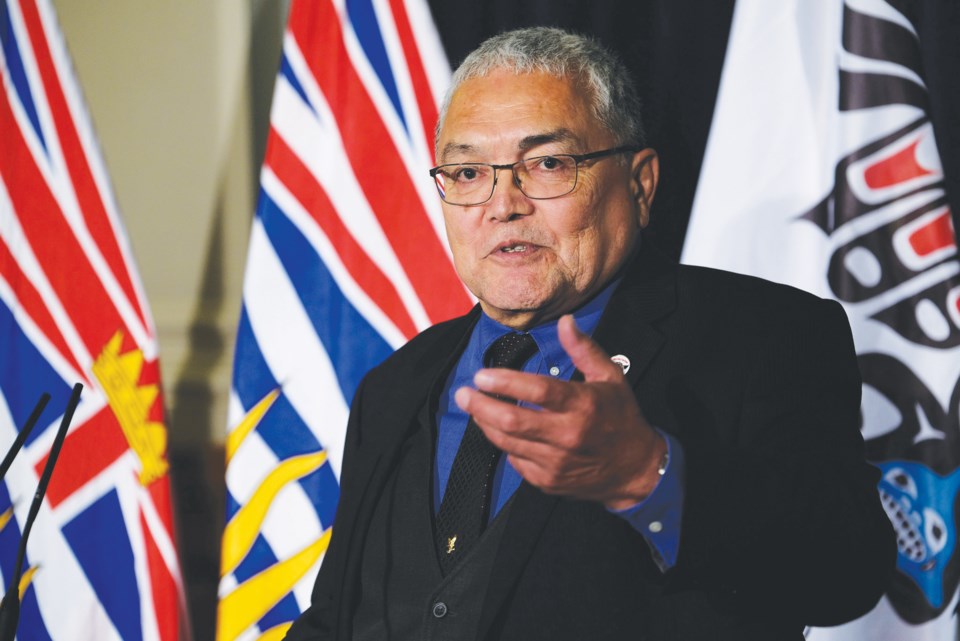 Chief Warren Paull in a file photo from the Oct. 4, 2018 Foundation Agreement signing ceremony in Victoria.Province of British Columbia Photo

One of the priority measures in 2018’s historic Foundation Agreement between shíshálh Nation and the province has been completed.

The province announced Feb. 25 that three parcels comprising 616 hectares known as “the gravel lands” have been transferred to shíshálh Nation, which has signed a lease with Lehigh Hanson Materials, allowing the gravel mining company to continue operating.

“Our Foundation Agreement recognizes shíshálh Title and Rights and expresses how the standards of the United Nations Declaration on the Rights of Indigenous Peoples will be co-operatively implemented in our relationship with the Province,” said hiwus (chief) Warren Paull in the release. “The return of these lands is one important step in this work, which demonstrates how principled and transformative approaches to reconciliation are achievable and important and beneficial for entire regions and all peoples who live there.”

Transferring the gravel lands as fee simple to shíshálh Nation was listed as an “immediate measure” in the Foundation Agreement.

At a local government meeting on the day of the announcement, Paull quipped that the transfer as “now our headache,” adding, “We look forward to seeing what we can do with that.”

The Foundation Agreement says the nation and province would also work together to address access on and over the lands, access to public utility infrastructure on and near the lands, addressing local government fiscal and service delivery implications, applying “applicable environmental safety standards,” and other interests.

In a 2019 update to the Sunshine Coast Regional District (SCRD), negotiators said critical local government infrastructure including the landfill, which is connected to the lands, would be excluded from the transfer and that full access would be preserved.

Access to the Chapman Creek Water Treatment Plant, which is located on the gravel lands, is also protected, according to the announcement. In 2019 the negotiators said only current rights were being addressed in the agreement and any future expansion plans would have to be discussed by the shíshálh Nation and the SCRD.

The Feb. 25 provincial announcement said “strong provisions” have been established by B.C. and shíshálh “to ensure drinking water quality is maintained in a section of the Chapman Community Watershed that overlaps with the gravel lands,” and that the SCRD will maintain its access to the treatment plant through a legal right-of-way.

MLA Nicholas Simons said the transfer process required “significant collaboration” with the SCRD, and SCRD chair Lori Pratt thanked shíshálh Nation “for its ongoing co-operation in ensuring SCRD staff can continue to access and operate key infrastructure that is located in the gravel lands.”

A medium-term goal – to be completed in about five to 10 years – is for shíshálh Nation to participate in other gravel and mining operations in the swiya and to enter into revenue-sharing agreements with the province “in relation to mining in the swiya,” says the Foundation Agreement.

Lehigh Hanson area manager Kevin Tokarek said the company supports transfer of the gravel lands to the nation. “We are excited about the future and look forward to working with shíshálh Nation going forward.”

In 2019 shíshálh Nation held a referendum that resulted in majority support for a 50-year extension of operations by Lehigh Hanson in Sechelt.

– with files from Keili Bartlett