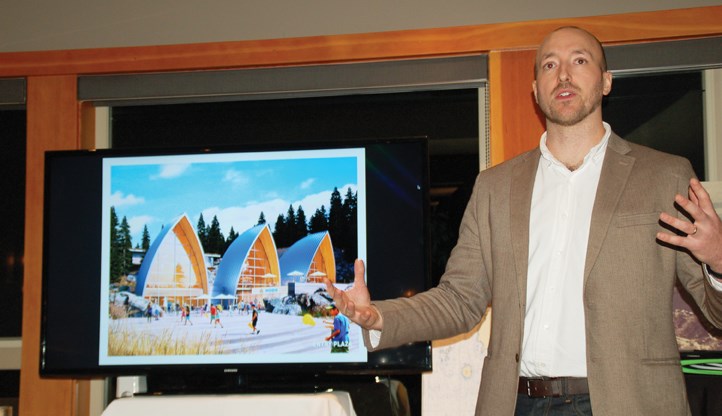 Architect Jeremiah Deutscher goes over the design of the Pender Harbour Ocean Discovery Station (PODS) during the launch of the fundraising campaign for the $10-million project on Dec. 3 at the Painted Boat Resort Spa and Marina.Christine Wood Photo

The Ruby Lake Lagoon Society has kicked off a campaign to raise $10 million for a state-of-the-art aquatic research and monitoring station in Pender Harbour that will double as an education centre and community gathering place, complete with a 200-seat conference centre.

The centre will also revive the dive school program that was offered at Capilano University for many years by Jim Rossi. Rossi has since passed away, so the program will be named in his honour.

The vision is to have the facility dubbed PODS (Pender Harbour Ocean Discovery Station) open to the public in 2020.

“It’s our 2020 vision,” said Michael Jackson, executive director with the Lagoon Society, during the official launch of the fundraising campaign on Dec. 3.

He said the idea came from the Sunshine Coast Biodiversity Strategy, which was completed by the Lagoon Society in 2014.

“After we wrote the biodiversity strategy, we identified the fact that there was very little marine research being done on the Coast,” Jackson said.

“That’s where PODS originally came from, but it’s also a really important building for a lot of other reasons.”

Jackson pointed to shifting demographics in Pender Harbour that have seen a steady decline in the number of young people in the area. “One of the ideas of PODS is to try to reverse some of those changes,” he said.

“We can start to reverse that trend because we’ll bring in a centre of excellence, we’ll bring in universities, and students and people from all over the world, and when you do that, you’re sure to attract more young families.”

PODS will act as a marine research hub but the facility itself will also gain some attention for its design, according to Jackson, who wanted it to look like the “Sydney Opera House of the Sunshine Coast.”

The facility features three structures made to look like upturned boat hulls on the shore of Irvines Landing, making PODS recognizable from land and sea.

The location was chosen this year, after the Lagoon Society stopped pushing for another spot eyed near the government wharf in Madeira Park that’s owned by School District No. 46.

“It was a complicated process [with the school district] and there was bureaucracy involved,” Jackson said, noting the lagoon society wants to hold fast to its proposed opening of PODS in 2020, so it couldn’t “afford to wait any longer.”

“As it happens, this is a far preferable site for us because it’s much bigger and has much more space for parking. And being right at the mouth of the harbour, it has far better water than by the government dock – so it’s much better for our aquarium and for doing the research because it’s quicker to get out into the strait and the islands and all the places you want to go and monitor and do the research.”

He’s very excited about the project and the location and eager to share the news with the community by way of a new website just set up at www.openpods.com

Currently the society has about $500,000 for the $10-million project, which includes the $2.5 million land price that will have to be paid by the middle of next year to secure the Irvines Landing location.

Jackson is confident the society can raise the funds once more people know about the project and what it will offer the Sunshine Coast.