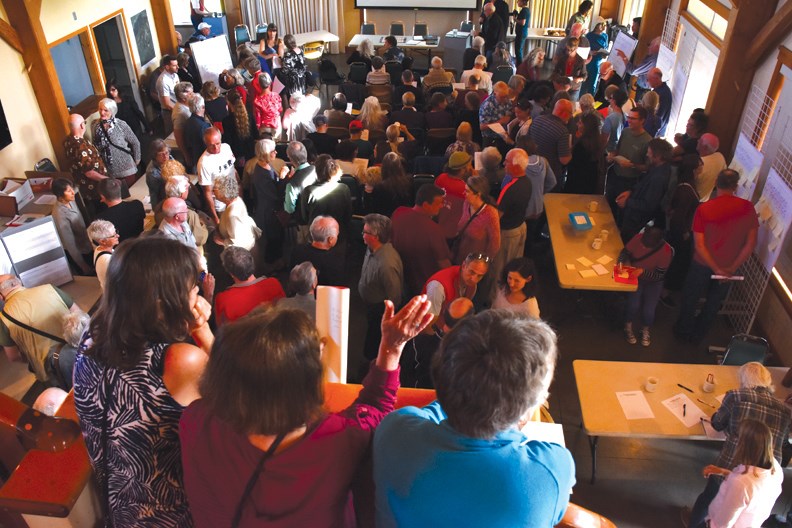 More than 200 people packed the Seaside Centre Wednesday evening for an open house on possible changes to Tetrahedron Provincial Park that would allow the SCRD to proceed with the Chapman Lake drawdown project.Sophie Woodrooffe Photo

The Environment Ministry says there will be a second open house on possible changes to the status or boundaries of Tetrahedron Provincial Park after hearing pointed criticism ahead of Wednesday’s open house in Sechelt.

The open house, billed as a chance to “learn about and provide input on potential options being considered to enable the Sunshine Coast Regional District (SCRD) to enhance the community water supply system in Tetrahedron Park,” drew more than 200 people to the Seaside Centre.

The SCRD needs permission from the province to deepen the outlet from Chapman Lake to make it possible to draw more water during times of drought.

Former Gibsons mayor Barry Janyk, who sits on the Tetrahedron Park Advisory Committee, made similar comments in the lead-up to the open house.

Powell River-Sunshine Coast MLA Nicholas Simons agreed. “It should be very difficult to alter the protected status of a park and I’m primarily focused on a proper process,” he told Coast Reporter.

At the urging of the Sunshine Coast Conservation Association, the open house format was changed.

After a brief period to review information boards, a presentation was given by a panel made up of BC Parks officials Tim Janzen, senior parks and protected area planner, Jennie Aikman, regional director, and Vicki Haberl, head of the regional planning section.

They reviewed the history of the SCRD’s water system, which predates the establishment of the park, and the redesignation options.

The trio then spent an hour answering written questions from the audience, including several about why the status quo did not seem to be one of the options on the table. They answered that because the minister can always say no, it doesn’t need to be specifically stated. They also cited the example of a 1999 request from the SCRD for changes to its permits that was rejected by the minister of the day after a similar process.

One question, asking why BC Parks was being expected to come up with a solution to the SCRD’s water problem, got a big round of applause from the crowd. Aikman said the management plan for Tetrahedron Park allows the SCRD to apply to expand its water infrastructure in the park, and once it applies BC Parks has to follow the process laid out in the plan.

When the meeting wrapped up, one attendee asked for a show of hands from those who don’t want to see changes to the park. Several went up.

Milne’s letter to Heyman indicated that Sechelt, at least, wants to see the minister  say no as well.

As well as promising a second open house, Environment Ministry officials told Coast Reporter the 30-day consultation that kicked off May 2 will allow for comments through the BC Parks website. Written answers to the questions raised Wednesday night will also be posted, including several that had to be referred to the SCRD.

The ministry officials also said: “Should redesignation take place, BC Parks will ensure that there is no overall loss of protected area and BC Parks will continue to manage the overall area consistent with the management of the current Tetrahedron Park.”

If the SCRD is granted a permit for the project, the ministry said, “BC Parks will ensure that permit conditions restrict the use of any additional capacity to emergency use during droughts and that other out of park solutions are developed to reduce future dependence on Chapman Lake water.”

The second open house has been tentatively scheduled for May 23.