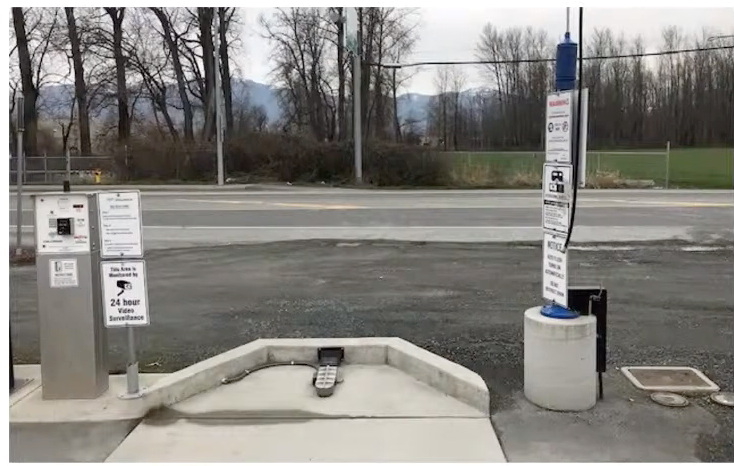 A place for RVers to dump their poop is an unlikely tourist draw, but it’s one reason District of Sechelt staff chose municipal hall as the ideal site for the Sunshine Coast’s first sani-dump. Councillors had other ideas.

Staff pitched municipal hall as the best of seven options presented at an April 28 committee-of-the-whole meeting because it would draw tourists to the downtown core, utilities are nearby, its close to Highway 101 and could be inspected daily.

“They’re fairly minimal in appearance and can be landscaped into the existing area,” said the district’s development engineering and sustainability manager, Meghan Lee, when presenting options.

The facility would have a water service wand, garbage can and curb sanitary service with a locking lid.

But the downfalls, including potential congestion and parking issues, concerns raised by Trail Bay Properties and possible removal of park space – and allure of other locations – closed the lid on the option.

The pump track at Trail Avenue, the 5700 block of Neptune Road, Lot L operations yard on Dusty Road, Mission Point Lot 1 at Highway 101 and the Water Resource Centre were all suggested, as was another idea not included in the staff report – Sechelt Inlet Crescent.

Staff ranked the Sechelt Inlet Crescent site as the second highest choice since it’s feasible from a technical, servicing and access perspective, but isn’t as close to the highway.

Dusty Road, while close to popular RV destination Porpoise Bay Provincial Park, would be more difficult to service and further from downtown. Cost would exceed grant funding but money could be saved if installation is aligned with construction of the new operations centre, said Lee.

While the Neptune Avenue location is close to Sechelt Village, staff anticipated the residential neighbourhood would oppose it, and road improvements would be needed.

During discussion, Coun. Alton Toth said he leaned towards Lot L and noted a test well in the vicinity could be used to run non-potable water to the site rather than install a line with drinking water, though that could be costlier.

Coun. Tom Lamb favoured the Sechelt Inlet Crescent location but also asked about the vacant lot across from the Water Resource Centre between Ebbtide and Trail Avenue. Staff said it was considered, but part of the marsh would have to be filled to create road access and could be too costly.

Coun. Matt McLean also spoke in favour of the Dusty Road location, calling it a “clear winner” after he subtracted the criteria for a central location, though staff replied the municipal hall site could be an incentive to stop in town rather than continue driving up the Coast. McLean also said he didn’t want to lose parkland.

Mayor Darnelda Siegers noted traffic on Dusty Road could be an issue. “We’re hearing already there are backups from traffic just trying to get into the landfill,” she said. “That has to be taken into account.”

Council voted for staff to report back with more analysis on Lot L on Dusty Road and Sechelt Inlet Crescent locations and scan for up to three more options.

An annual maintenance cost of $10,000 is expected.

Based on a survey conducted earlier this year, 78 per cent of respondents supported a facility, with more than half preferring it be located close to the highway.

Currently, there is no public permanent sanitary-station for recreational vehicles in the District of Sechelt area.

The district received a grant trough the Ministry of Arts, Culture and Sport to cover the cost to construct the facility, up to $126,519.

Location options were evaluated based on construction and maintenance costs, RV accessibility, proximity to the highway and ease of access for tourists, pedestrian safety, congestion, neighbourhood fit and nuisance.