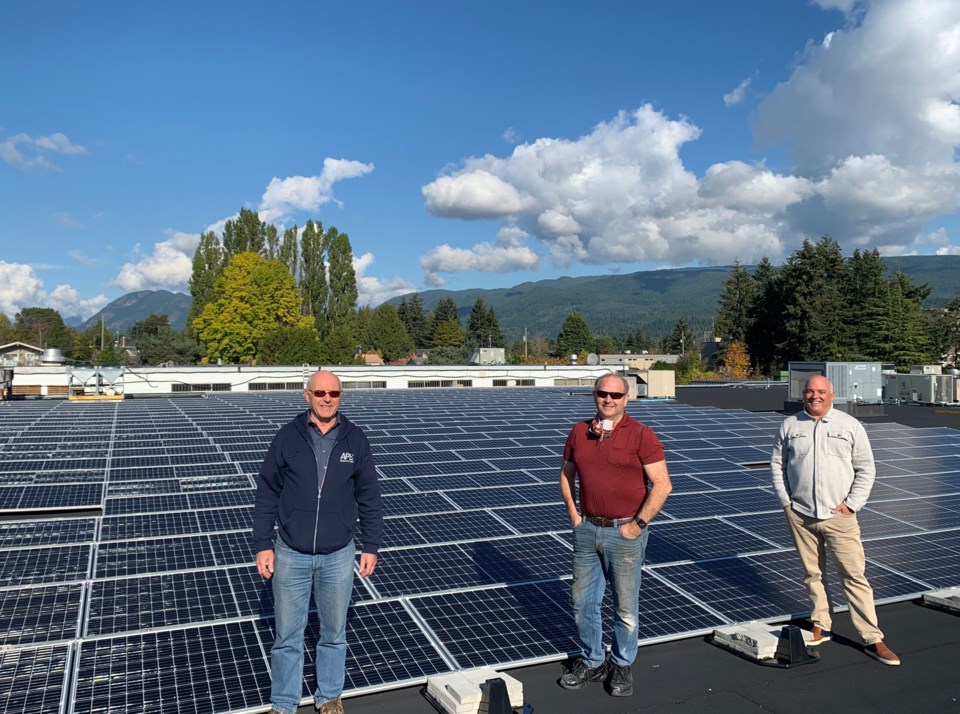 An array of 350 photovoltaic panels has been installed on the roof over Clayton’s Heritage Market in Sechelt’s Trail Bay Centre.

It’s the first 100-kilowatt net-metred system powering a grocery store in B.C. that’s hooked up to BC Hydro’s grid, according to Alevtina Akbulatova, BC Hydro’s net metering program manager.

The application with BC Hydro began about seven months ago. The panels were installed over a few days in mid-summer and by early October the array had been connected to the grid.

The system, which cost approximately $250,000, is expected to generate about 160 megawatt hours per year and the investment will take approximately 15 years to pay for itself, while the lifetime of the array is estimated to be 30 years.

“A grocery store has a large electrical draw because of the refrigeration that is running all the time, [so] we can really benefit from reducing our hydro bills,” Bruce Morris, president of Trail Bay Properties, told Coast Reporter. He said the large flat roof was also ideal for the project.

Morris said cost was the second motivating factor in the decision. The first was environmental. “We need to do what we can to reduce our reliance on anything carbon-based. Solar makes a lot of good sense,” he said, adding he and other family members have installations on their private properties.

Since 2010, BC Hydro rates have increased more than 70 per cent while the cost to install solar arrays has dropped by more than 60 per cent, according to a report by sustainable energy think tank Pembina Institute.

That drop in cost paired with longer warranties and local political will are contributing to a trend on the Sunshine Coast for larger commercial and public installations, say APS co-founders Olson and Scott Elston. “There’s a push from politicians [to put solar] on buildings that are owned by the local government,” Elston said.

The company has installed panels on five Sunshine Coast schools, including on Langdale Elementary, which Elston said produces about as much energy as it consumes. Since April, the Sechelt Seniors Activity Centre has been drawing power from recently installed panels. And the Sunshine Coast Regional District is looking into the feasibility of installing an array on the Gibsons and Area Community Centre.

Another group, the Sunshine Coast Community Solar Association, has also advocated for larger installs and contributed to the activity centre array.

Elston said the company is seeing “a huge increase in demand,” and is expanding into the Lower Mainland. “Most people are coming to us from the financial side,” he said, adding the market isn’t yet as strong as California, where it’s quickly becoming a norm. But unlike in California, he said, B.C. has a climate advantage, since solar arrays perform better in cooler temperatures.

To stay on top of the momentum, Olson said he hopes to see support from the now-majority NDP government. “It would be nice to see them do something for the solar industry to help incentive it,” said Olson, adding there are no tax incentives to install solar panels in the province.

BC Hydro’s net-metering program also puts a cap on the maximum size of systems at 100 kilowatts, but Olson and Elston say in certain cases there could be an advantage to relaxing it. For example, if Gibsons Elementary School’s 100-kilowatt system, which APS also installed this year, could run at 140 kilowatts, Elston said “that school would be first-year net zero.”