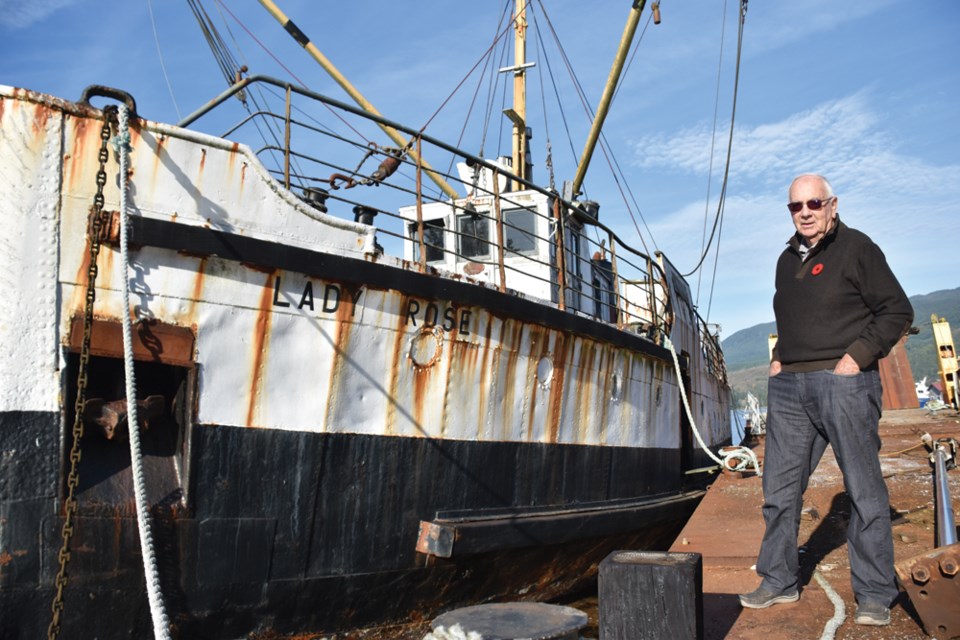 After a three-day journey the MV Lady Rose is tied to a dock in Sechelt and the group behind the acquisition of the historic steamship has set up a website in search of stories, connections and suggestions from the public as they plan for the vessel’s future.

“What we’re trying to do is unearth stories and gather as much information” as possible, said Paul Meyer, a coordinator with the project.

At the beginning of October, the Clayton family announced it had acquired the last operational vessel from the Union Steamship Company with hopes of restoring her as a public exhibit.

The group working on the project had been waiting for a window of good weather to tug the 180-tonne ship to Sechelt from Tofino, where she had been moored for nearly a decade.

The journey began the morning of Oct. 27 with Beamsville, a historic vessel in her own right. The 39-foot tugboat was used during the Second World War as an assist vessel for war ships arriving at Esquimalt navy base. She stayed in service until 1997 – the longest serving auxiliary Navy vessel in country, according to its owner and skipper, Marcel Theriault.

Theriault towed the 105-foot vessel 285 nautical miles – his longest tow with Beamsville – through the Strait of Juan de Fuca and up the Strait of Georgia to the Sechelt Peninsula. “They made perfect timing and ripped through the Skookumchuck,” said Meyer.

On the afternoon of Oct. 30 the ship was towed safely into MacKenzie Sea Services’ marina in Porpoise Bay, where she is expected to stay for the time being. A film crew was commissioned to document the journey.

“She is effectively home to where she was commissioned to be built for,” said Meyer, referencing the use of the ship, starting the in the late 1930s, in Howe Sound to ferry passengers and freight. In 1951 she was sold to another operator and eventually used to service routes between Port Alberni, Bamfield and Ucluelet.

Don MacKenzie, who operates the marina, shares the group’s passion for Union Steamships and agreed to keep the vessel tied up at his dock. “It looks rough [but] it’s not in all that bad a condition,” he said.

The ship hasn’t been used in years, and is rusted. Significant cleanup was done inside and on the decks to prepare her for the tow, including removing half a metre of marine growth from her hull, removing all oil, and pumping about 10,000 litres of rainwater from various compartments, which rose her two feet out of the water.

The bulk of the work, however, will start only after the group decides on the ship’s future. One idea is to restore her as a historical vessel for light use. Another is to transform her into a land-borne display.

“We are in the planning phase,” said Meyer. “There are so many interested parties and so many things that are coming out and evolving from other conversations, we want to do extreme due diligence.”

That includes reaching out to the public for their input. “We welcome stories,” he said.

Another benefit of having the ship on the Sunshine Coast is that the group will be able to gauge the public’s interest, said Dick Clayton, who plays a key role in the project.

“Personally I’d like to see it made into a maritime museum-type exhibit,” he said.

People have expressed curiosity and offered to volunteer, though Clayton acknowledged they aren’t quite ready yet.

As the ship shone, rust and all, in the mid afternoon light the day after her arrival, Clayton told Coast Reporter, “It makes the project look quite immense.”

Stories and suggestions can be sent to: info@ladyrosepreservation.com.