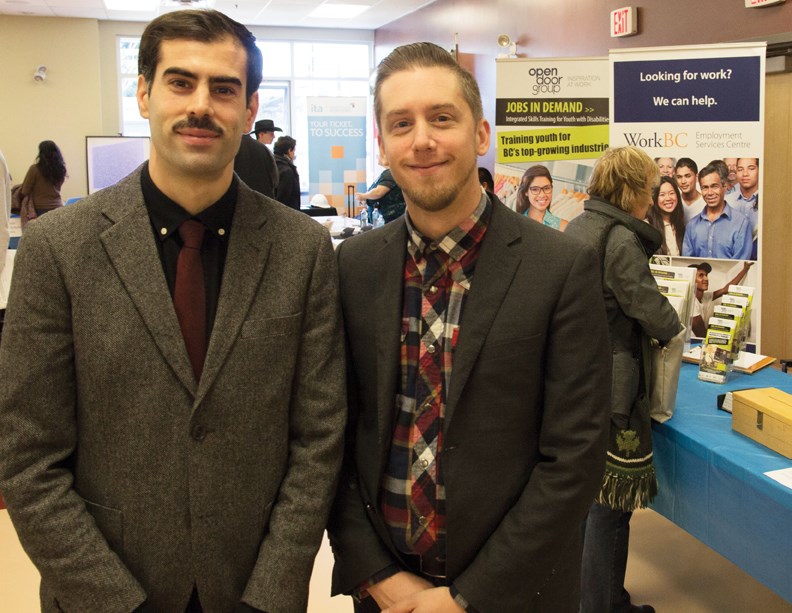 The Sunshine Coast Hiring Fair on Nov. 20 at the Gibsons and Area Community Centre was well attended by 190 people from a wide variety of employment backgrounds.

Jamie Hoskins, associate program director for the Work BC Employment Services Centre (ESC) in Vancouver’s Downtown Eastside, said that his office wanted to connect unemployed workers on the Sunshine Coast with off-Coast organizations seeking employees after they had heard about the layoffs at Howe Sound Pulp and Paper (HSPP).

“We put out the call to other organizations and decided, let’s get something together to create some hope, to create some opportunities and open some doors for these people and let them know that there are employers who are looking to hire,” Hoskins said.

Out of 190 job seekers who visited the hiring fair, 31 were looking for work in the trades, 29 were looking for administrative or office work, 37 were looking for “anything,” and the remainder sought various other employment. While several of the 18 employers set up at the fair were from off-Coast, others were offering jobs locally.

Kevin Sim from Sechelt has lived on the Coast for most of his life. He was at the hiring fair looking for work after losing his job in the communications industry.

“It’s difficult to look at the prospects of possibly having to move away, but on the other hand, you don’t necessarily have to move to work somewhere else,” Sim said. “With some of the bigger companies that are here, they have a lot of different positions and locations throughout B.C., Canada and North America.”

Max Baessato, who works in employer development with ESC, said that while many on the Coast are looking for work, there are also a lot of employers on the mainland looking for workers.

“It was brought to our attention – in Vancouver – that there were some folks who were going to be experiencing these [HSPP] layoffs that had an interest in perhaps relocating or commuting to work,” Baessato said. “So the local team here brought it to our attention that we could maybe get some employers to come from the mainland to represent themselves.”

Gibsons resident Jesse Rydde said the lack of work for young people on the Coast is most likely the reason she will end up leaving.

“I can survive without a job right now, but for the bigger picture of my life, I think I will end up leaving the Coast,” Rydde said. “For career aspects, you’re better off off the Coast. You have way more options and living is way more affordable.”

Maggee Lang from Sechelt concurred with Rydde’s assessment of the work opportunities on the Coast.

“I love the Coast and I would stay, but it’s a little difficult to live here,” Lang said. “The living cost is very expensive and the job demand is not enough.”

Lang is planning to move to Vancouver in the new year for school.

At Coast Reporter’s press time, it was not yet known how many people seeking employment at the fair had been placed in jobs, although one person was hired on the spot by Independent Grocer.

The hiring fair was organized by the Open Door Group, which administers the WorkBC employment program out of its two centres on the Sunshine Coast, in Sechelt and Gibsons. The Open Door Group is online at www.opendoorgroup.org