Marine reference guide includes more than 400 layers of information
May 29, 2021 6:29 AM By: Keili Bartlett 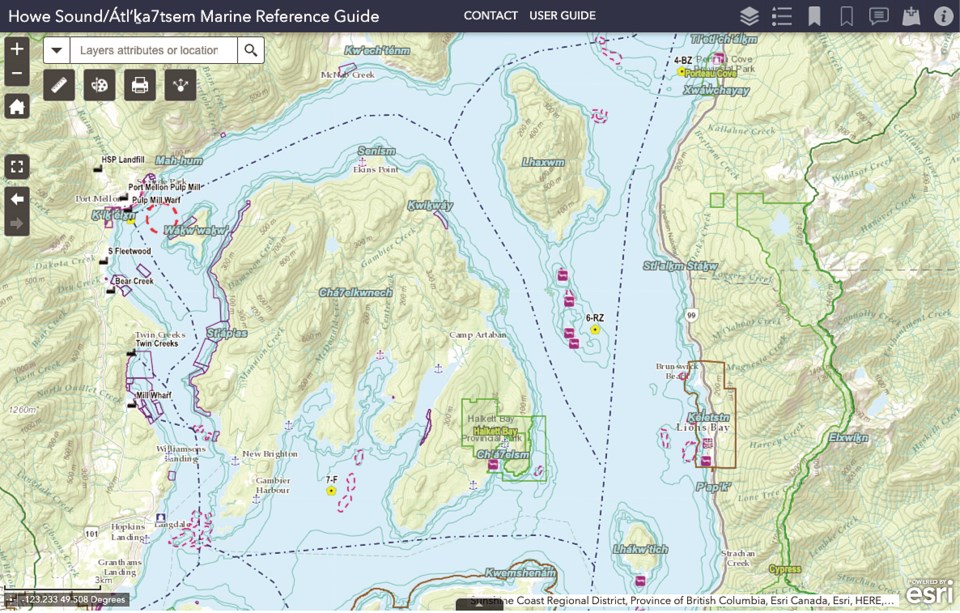 On the eve of World Oceans Day on June 8, the Howe Sound/Átl’ka7tsem Marine Reference Guide project will be launching two maps of the region.

The first is an interactive tool that was three years in the making and has more than 400 layers built into it.

In an interview, Gibsons-based project director Fiona Beaty said the interactive map helps visualize how people, industry and marine life use the area.

“It’s really helping to lift the veil of the ocean surface,” Beaty said.

The interactive map’s main use, she said, is for marine spatial planning and to help inform decision making in areas that include ecological health, as well as economic, social and cultural values. It can also help identify conflicting uses, such as between sensitive habitat and industrial activity or a tourism hot spot, in an effort to protect not only the environment but access and livelihoods.

Howe Sound is at a “tipping point,” Beaty said, after years of pressures from natural resource-based industries that impacted its health.

“Now we’re at this new point where there’s a different array of pressures that include climate change, but also increased tourism pressures, increased population pressure, [and] coastal development. So I’m hoping that this tool can help inform decisions, but also human behaviour so that we can kind of manage those pressures better,” she said.

Beaty said the creators of the guide hope to inspire a sense of stewardship that will lead to community initiatives rather than relying on change coming from the government level. The interactive map can also be used by educators to help students gain a sense of place.

During the course of the project, the initiative evolved to include community workshops and youth engagement opportunities. One such event involved Sḵwxwú7mesh Nation youth surveying herring spawning in their territory, as well as the guide’s research team completing some plankton and eelgrass fieldwork to fill in knowledge gaps. Sḵwxwú7mesh Nation place names and language are also incorporated into the map.

A second map shows a community network of all the people and groups in the area, including the stakeholders and rights holders, “like a visual directory,” Beaty said. “We use the map to show who is doing what, where.”

Beaty said there’s been strong community support of the project, with First Nations, governments, industries, conservationists and recreationalists all pitching in.

“We’ve been very grateful for people’s desire to come together and collaborate, and actually build relationships and build capacity to work together to protect ocean places and access,” Beaty said. “There’s not always complete agreement, of course, but that’s kind of part of the process. Kind of like diving into that diversity of perspectives of why this place is important, and helping people to kind of find a common vision for how we want to move forward.”

The guide is led by Sḵwxwú7mesh Nation and the Ocean Watch Action Committee made up of local and regional governments around Howe Sound.

MakeWay, previously known as Tides Canada, hosts the guide on its shared platform.

Over the years, nearly half a million dollars was fundraised for the project, and the guide had an annual operations budget of $200,000, with funds from Sḵwxwú7mesh Nation, local governments and other organizations including National Geographic, and in-kind support from the David Suzuki Foundation, Ocean Wise, the Pacific Salmon Foundation, SeaChange Marine Conservation Society and UBC.

On June 7 at 7 p.m., the virtual launch event will celebrate the completion of the project and thank community members for their help to make it a success. There will also be upcoming workshops to explore some of the map’s themes and how to use its information.

Find the guide and more information at www.howesoundguide.ca