Gibsons council is hoping to hire a community homelessness coordinator to streamline the process of establishing a cold weather shelter.
Jun 4, 2021 10:42 AM By: Sophie Woodrooffe 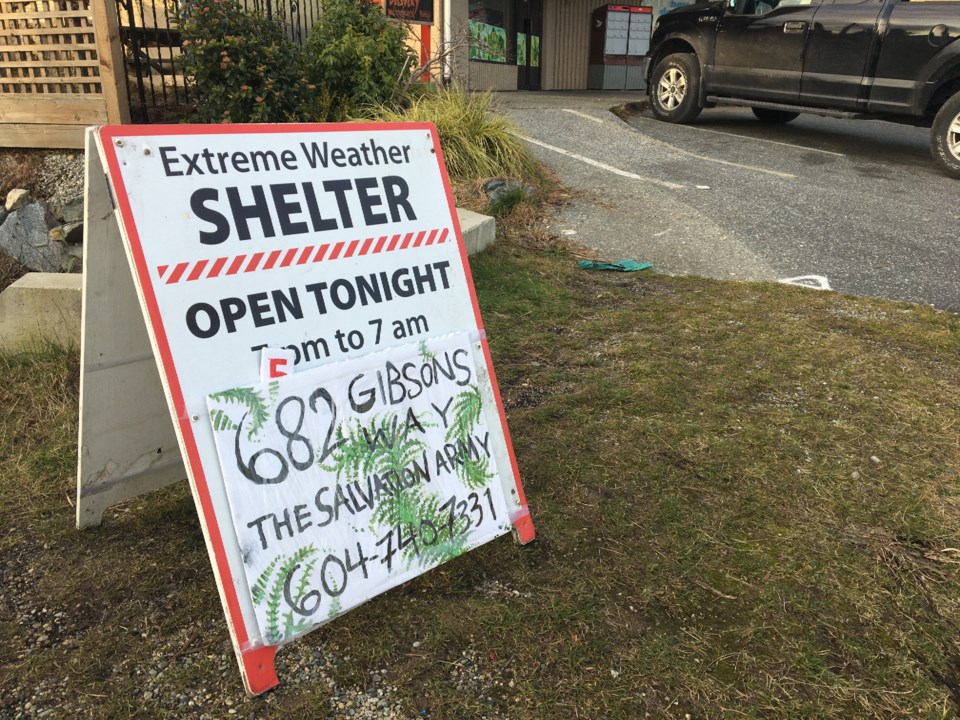 A sign advertising an extreme weather shelter in Gibsons.Sophie Woodrooffe

Gibsons council is hoping to hire a community homelessness coordinator to streamline the process of establishing a cold weather shelter.

Town council supported a Strengthening Communities’ Services Grant application through the federal government’s Safe Restart funding envelope that could supply up to $200,000 to hire a community homelessness coordinator “to organize and confirm multi-year commitments on location, funding and operator for a Gibsons cold weather shelter” as well as other advocacy work, such as launching a de-stigmatization program and funding a temporary outreach support worker.

Part of that funding, about $35,000, would also be used to fund commercial kitchen renovations for the Salvation Army, as well as other improvements to the space, which served as the site for the cold-weather shelter and has seen demand for meal preparation rise steeply. Last year 16,000 meals were served out of the kitchen compared to 5,000 in 2019.

Sunshine Coast Homelessness Advisory Committee (SCHAC) chair Silas White told Coast Reporter his organization is working with the town on the grant application “to better integrate the reality of homelessness and shelter services in our community, through public engagement and communications.”

Even with the 40-bed supportive housing complex on School Road that opened in the spring, “we definitely still see the need for some kind of modest shelter services in Gibsons in the winter,” White said.

The shelter remained busy after the supportive housing complex opened, and was serving up to six people a night in mid-April, when it closed for the season.

White said the expansion underway at the Sechelt shelter “will go a long way to support these same clients.”

“Each year for the past few years we’ve had to scramble and there’s been uncertainty as to location and timing and in this particular past year we didn’t know what was going to happen,” Beamish told Coast Reporter.

“BC Housing came forward at the last moment and it was November when the weather was already turning bad.”

At that time, people in Gibsons were reported to have been put in taxis and driven to shelter spaces in Sechelt.

She said the focus should be on training and resources to identify staff and a lead organization to take on coordinating the extreme weather shelter come the fall. “That’s the part we’re working on right now, is ensuring we have staffing for that extreme weather response,” she said.

Beamish said he would like to see a cold weather shelter be available in October.

Salvation Army to provide shelter for Gibsons homeless over winter
Jan 14, 2021 11:36 AM