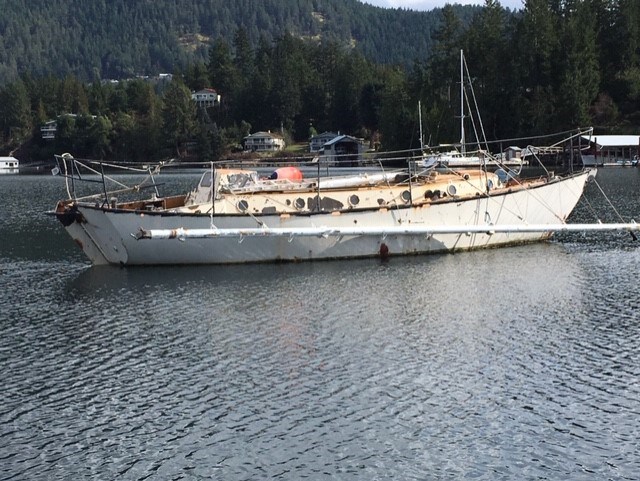 An unnamed 35-foot steel sailboat with the mast alongside at anchor in Gerrans Bay.PENNY HARRISON PHOTO

Four more boats have been targeted for removal by the same Pender Harbour community organization that recently pulled two derelict vessels from Gerrans Bay with funds from the federal Abandoned Boats Program.

The four vessels “are in the queue as far as proceeding with removal,” said Eliza Kinley, director with the Pender Harbour and Area Residents’ Association (PHARA).

An application for the boats to be deemed derelict was successful, which will make them eligible for federal funding. The group also has to identify the owners and pursue possession.

Assuming they do get possessions of the boats, timelines on removal are uncertain because the program’s most recent call for assessment and removal applications is closed, so the group must wait for Transport Canada to announce the next round.

If the application to remove the four boats is successful, the group hopes to hire local contractors and said they are also open to working with the Dead Boat Disposal Society, a not-for-profit that has approached local governments to assist with removals.

Three of the boats are located in Gerrans Bay and the other is in Hospital Bay.

In Gerrans Bay is Chuckanut Belle, a 40-foot Chris-Craft-style wooden vessel rafted to an unnamed houseboat. “We get lots of calls from residents,” said Kinley. “Once in awhile they end up being summer residences for people, which adds to the problem,” since the boats don’t have holding tanks for sewage. And because they don’t have adequate ground tackle, they “bounce off” nearby vessels during inclement weather, said Kinley. “They are very dangerous.”

An unnamed 35-foot steel sailboat with the mast alongside is also located in Gerrans Bay.

None of the boats uses anchor lights or has moved from its achorage for between two and five years.

The group has identified eight other boats that could qualify as derelict in Pender Harbour, in addition to the four they’ve chosen to pursue for removal and the recently removed Kwatna and Lulu Island. “We wanted to do the tugs first because they were the technical ones,” said Kinley, who described the removal process as “a steep learning curve.”

At a recent Sunshine Coast Regional District (SCRD) board meeting, director Leonard Lee said the removal of the Kwatna, which was beached on Dusenbury Island, “went very slick.” It was hoisted by an excavator, put on a barge, broken into chunks and placed in a container.

The Lulu Island removal, however, was more complicated because the boat had sunk. “They tried to pick it up and it just fell apart,” said Lee. Contractors had to drop down nets to gather pieces of the vessel.

“This is kind of a caution because it took three days instead of one to get rid of that boat,” said Lee, adding that the contractor hired for the job “is in danger of losing a lot of money.”

The group received a funding commitment from the Abandoned Boats Program of approximately $75,700, which was expected to cover 75 per cent of the cost to remove Kwatna and Lulu Island, but complications from the unanticipated disposal fees pushed the cost “into higher six figures,” said Kinley “which is a lot of money to wrap our heads around.”

PHARA is working with the federal government to see whether those unexpected costs could be covered, and subcontractors have agreed to reduce their fees, said Lee.

“[Pender Harbour] is an environmental gem and residents deserve to use it without running into things and without having someone else’s garbage planted there,” said Kinley.