Experts, politicians, and public weigh in at long-term care forum 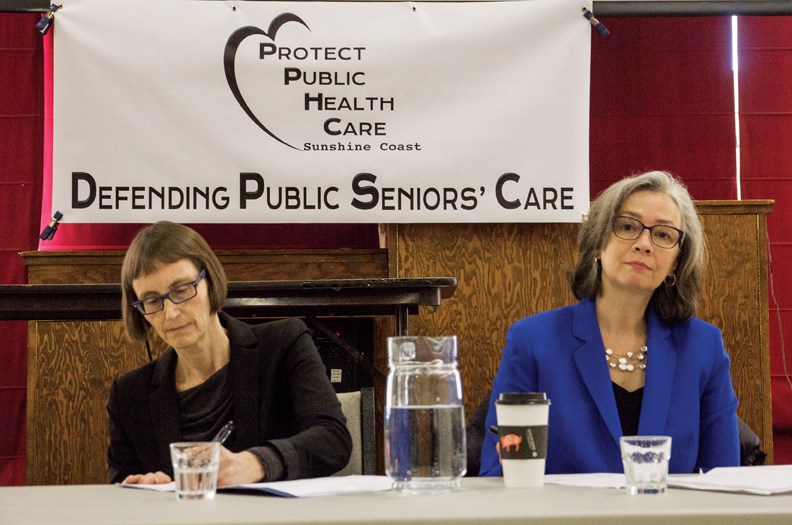 The crowd of more than 200 on Jan. 28 was a sign that, even after seven months, public interest in Vancouver Coastal Health’s (VCH) decision to close Shorncliffe and Totem Lodge and sign a contract with Trellis Seniors Services for long-term care beds at a new facility in Sechelt hasn’t faded.

Wendy Hunt, the chair of Protect Public Health Care, opened the forum with a call for people opposed to the deal to keep pushing to have the decision reversed.

“The decision was made without community engagement or consultation, and when people raised their voices in opposition we were told that this is a done deal,” Hunt said.  “We do not believe it is a done deal … Local resistance is as strong as ever.”

The event was billed as a discussion on the merits of publicly owned and operated long-term care versus a private for-profit model such as Trellis’ Silverstone Care Centre.

UBC researcher Dr. Margaret McGregor, who spent time working as a care aide before entering medical school, told the audience that most experts in the field believe that “relational care” leads to the best results, and one of the keys to relational care is spending time with residents.

McGregor said that’s where the differences between ownership types are most obvious. “When it comes to the research on ownership and staffing, irrespective of the type of data used, the country the research is done in, the province or the jurisdiction of the study, the evidence consistently finds that for-profit facilities, on average, provide fewer hours of care when compared to public, and a lesser extent non-profit facilities.”

According to McGregor, a Statistics Canada analysis from 2006 found public facilities provided 61 more minutes, and non-profits 16 more minutes, per day than the average for-profit.

A report released by B.C.’s Seniors Advocate last week shows a similar pattern on the Sunshine Coast. Shorncliffe and Totem Lodge in Sechelt provide 3.14 and 3.29 hours per day, Christenson Village, a private non-profit in Gibsons run by the Good Samaritan Society, provides 3.18. The minimum set out in the agreement between Trellis and VCH is 3.05 hours. Ministry of Health guidelines call for a total of 3.36 hours.

“The most consistent differences that the research has found between for-profit facilities and public or non-profit facilities are lower staffing levels and higher rates of hospital use [residents needing transfer to hospital] in the for-profits,” McGregor said, adding that for-profits also have a higher number of complaints and more “citations issued by inspections.”

McGregor went on to stress that the studies shouldn’t be seen as evidence that workers and care providers at for-profits do a bad job or that all public facilities are “shining examples,” only that there are consistent differences based on ownership.

The other speaker at the forum was Jennifer Whiteside, business manager of the Hospital Employees Union, which represents most of the staff at Shorncliffe, Totem and Christenson Village. She said long-term care in B.C. is facing a crisis, created by underfunding and an increasing trend toward privatization, contracting-out and contract flipping.

Whiteside said it creates a cascading effect where wages and benefits are eroded, staff turnover is high, and overall care for residents might suffer.

Before the forum, Whiteside toured the long-term care facilities on the Sunshine Coast and met with HEU members. “I was very struck by what I saw. I saw so much kindness, and I saw so much love between residents and the people who were providing care for them,” she said. “I saw a lot of short-staffing. I saw a lot of care aides running because they were missing two or three sets of hands on their shifts.”

With a provincial election just over three months away, VCH’s long-term care strategy is emerging as an issue in Powell River-Sunshine Coast, and even though it wasn’t part of the original agenda, forum organizers gave the candidates who were there a chance to offer their take.

NDP MLA Nicholas Simons said he and his party oppose the VCH plan and will fight to stop it.

“The values of the party I represent, am proud to represent, are against the privatization of health care in any of its forms,” Simons said. “I’m very happy to have a petition in my office with almost 10,000 signatures from people like you … We’ll continue this fight – and thanks for putting some wind in my sails.”

Mathew Wilson, the BC Liberal candidate, said he recognizes the concerns about how VCH came to its decision to close Shorncliffe and Totem, but also the opportunity.

“I think, quite frankly, the level of engagement with the community on the model they [VCH] came up with has failed the community in terms of the process of getting here, and people are very upset about that. I hear that all the time,” Wilson said. “Whether we can change direction now, I don’t know. Vancouver Coastal Health is the only one that can speak [to that]. But, I think what we don’t want to lose sight of is the opportunity for our community to have a new facility – 20 additional beds – and you’re right, 20 is not enough, and Vancouver Coastal Health is recognizing that.  It’s a modularized facility so it can actually grow to meet the needs of the community.”

The other candidate at the forum was Kim Darwin of the Greens who pointed out their platform calls for “comprehensive and accessible heath care for all B.C. residents, publicly funded through progressive taxation.” She also said it comes down to the government’s spending priorities.

“It all comes down to creative accounting and budget allocation and political priorities,” Darwin said. “It chaps my hide when the government can whip out $9 billion to build an infrastructure [the Site C hydro project] that the BC Utilities Commission turned down not once, but twice, and yet here we are today groveling for our piece of tax dollars to be spent on something our community needs.”

Several people in the audience asked what could be done to either convince or force VCH to change direction.

Whiteside said the HEU has been told by VCH that the plan will go forward.

“I think a room like this is very difficult to ignore, and I wouldn’t underestimate the power of your voices,” she said, and suggested people consider going to the next VCH board meeting to raise the issue.

“This community has been very active and very powerful in putting your voice forward and I encourage you to continue doing that.”