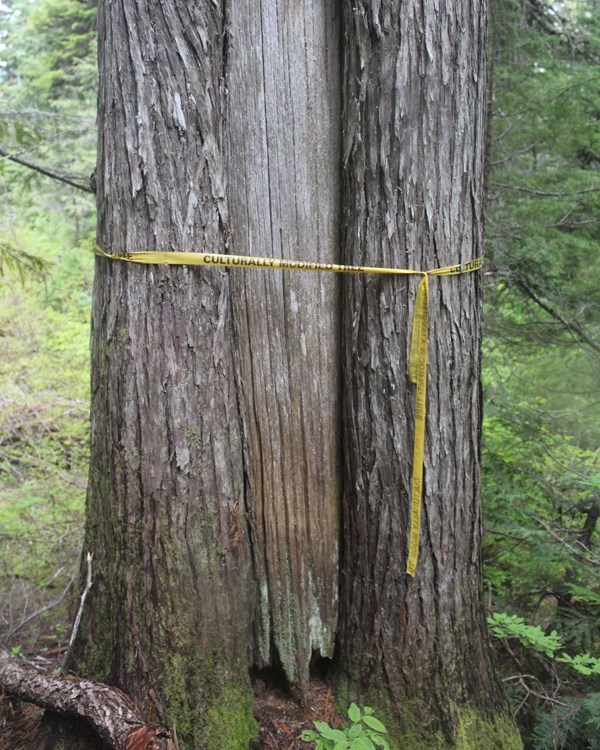 BC Timber Sales (BCTS) reversed its position after the BC Archaeology Branch weighed in on the dispute between archeology firms hired by ELF and the province regarding the contested patch of forest in Sḵwxwú7mesh Nation territory on the Sunshine Coast.

As a result of the branch’s decision, Coast Reporter has learned, 77 culturally modified trees have been entered into the Provincial Heritage Register following a new field review conducted by BCTS and Squamish Nation, with an archeologist under contract with the forestry agency.

The agency is still planning to move ahead with harvesting, but BCTS is altering its logging plans for the area.

The Ministry of Forests (FLNRORD) confirmed that cutblocks in Timber Sales Licence A8712 “will be amended, and the road design changed, to exclude the CMTs.” The licence covers approximately 64 hectares and not all the trees are located within block boundaries, the ministry said.

Members of ELF noticed flagging on the affected trees while in the area this summer, ELF founder Ross Muirhead told Coast Reporter.

“Finally [BCTS] acknowledge there are CMTs up there after years and years of saying there were no CMTs, that that particular scarring was done by some unknown natural cause.”

The resolution of the controversy has been nearly a decade in the making.

Initially, in 2011, BCTS hired archeology firm Baseline Archaeological Services to review trees in cutblock DK044 and found “negative results for cultural resources,” wrote Kira Kristensen of the BC Archaeology Branch, in a letter outlining the controversy and branch recommendations.

That triggered an archeological impact assessment, conducted by Baseline under contract with BCTS. The firm maintained the trees weren’t scarred by humans.

After analysis by a provincial forest pathologist didn’t establish a conclusive cause, Baseline studied seven samples of scarred yellow cedars and again concluded the “scars are most likely natural.”

ELF commissioned another archeology firm, Millennia Research, which came to an opposing conclusion, that the scars – some of which date back to the 1500s – “are most likely cultural,” wrote Kristensen.

The branch concluded, “while not definitively proven to be cultural, the evidence on balance supports the argument for they being CMTs subject to the Heritage Conservation Act.”

Kristensen then ordered an archeologist to “fully record and map the CMT site(s) prior to any timber harvesting or related development activities.”

The work was conducted in the summer of 2018, according to the forests ministry.

The branch also concluded that “mixed opinions” about the scarring “is a reflection of the lack of research and accepted methods” for analysing dates and establishing uses of yellow cedars.

In a release, ELF claimed they have seen “many more CMTs” still unflagged and are hoping the acknowledgment of the CMTs will lead to the protection of the forests, with collaboration from Squamish Nation.

“It’s recognized in the archeological community that these high-elevation yellow cedar forests with hundreds of CMTs are rare and provide a living museum,” the group said.

Oral histories shared by elders from Haida, Nuu-chah-nulth and other West Coast Indigenous communities, and evidence gathered by ethnographers and archeologists suggest Indigenous people have travelled great distances and heights to harvest the inner bark of yellow cedar, prized for its strength and softness as clothing material, especially for infants. Some believed the high-elevation trees possess supernatural qualities.

Living trees bearing harvest scars etched by Indigenous ancestors carry profound cultural importance and can be eligible for protection from logging under the Heritage Conservation Act, usually if the scarring is more than 170 years old.