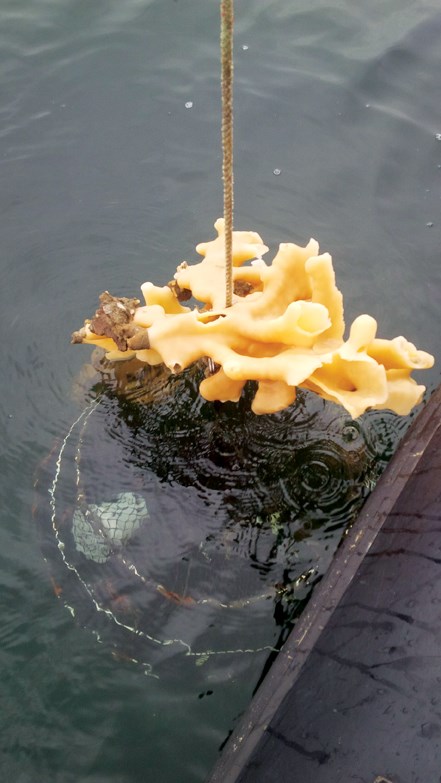 A fragment of glass sponge coral is caught up in a prawn trap seized near Passage Island at the mouth of Howe Sound.DFO Photo

The Department of Fisheries and Oceans (DFO) is investigating after recreational prawn traps were discovered in an area closed to bottom fishing to protect glass sponge reefs.

The traps found near Passage Island, between Bowen Island and the mainland, had entangled glass sponges that could have been thousands of years old.

Those reefs near Passage Island were among nine in Howe Sound and Georgia Strait covered by the ban, which was announced in June, 2015. DFO has also asked First Nations to voluntarily avoid the areas if they’re fishing for traditional food or ceremonial purposes.

Fisheries officer Eric Jean told Coast Reporter that DFO began enforcing the ban in 2016 and trying to educate people about the ban and the importance of protecting the sponges.

“We’ve been pulling traps ever since,” he said. “The fact these traps are being set is often because [people] don’t hear a lot about [the ban]. Whether people are understanding that there are closures in the area that they’re fishing, or they’re unaware, that’s what we’re trying to accomplish.”

Jean said the traps they found on Feb. 25 were properly marked and they are contacting the owner as the investigation continues.

Several more glass sponge reefs have been discovered in Howe Sound since the 2015 ban was imposed, and conservationists are hoping the other reefs will get protection as well.

A map of the closure area is available on the DFO website: www.dfo-mpo.gc.ca/oceans/ceccsr-cerceef/closures-fermetures-eng.html