A cutblock in Dakota Bowl on the slopes of Mount Elphinstone, where the existence of 77 culturally modified trees (CMT) was recently confirmed, has been removed from the BC Timber Sales (BCTS) auction list for harvest in 2021.
Sep 15, 2020 11:35 AM By: Sean Eckford 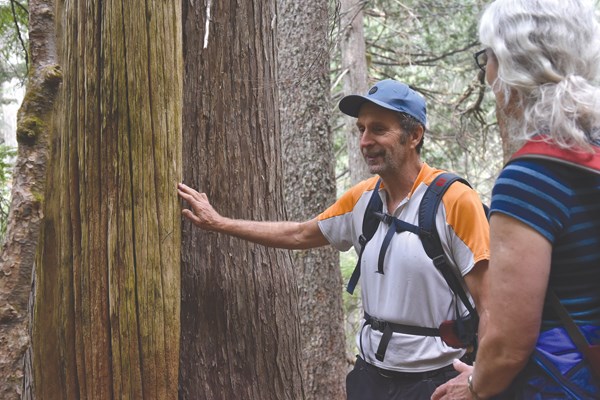 A cutblock in Dakota Bowl on the slopes of Mount Elphinstone, where the existence of 77 culturally modified trees (CMT) was recently confirmed, has been removed from the BC Timber Sales (BCTS) auction list for harvest in 2021.

Powell River-Sunshine Coast MLA Nicholas Simons said in a Facebook post last week that he had “confirmed that TSL A87126 Dakota Bowl is no longer scheduled for sale as published in the 2020 operating plan."

And in a statement to Coast Reporter on Sept. 14, Ministry of Forests, Lands, Natural Resource Operations and Rural Development officials confirmed that A87126 is no longer in the 2021 schedule and “has been pushed further into the future by a year or more and may not show on the fall operating plan publication.”

The group Elphinstone Logging Focus (ELF) has been trying to have the area preserved and fought for recognition of the culturally modified yellow cedars.

As of earlier this month, the cutblock was still in the BCTS operating plan for harvest in 2021 and according to the ministry it was going to be “amended, and the road design changed, to exclude the CMTs.”

The Sept. 14 ministry statement also said, “BCTS is assessing options for this sale and reviewing assessments to determine how the information and values raised will be incorporated into the future blocks.” It confirmed that the final configuration of the cutblock will exclude all CMTs and said “BCTS will continue to engage, and work with, the appropriate First Nation for planning in this area.”

ELF’s Ross Muirhead, who led a guided hike through Dakota Bowl last weekend, said, “This might be the most deferred block in the history of forest planning in B.C. and for good reason.

“The government and BCTS can’t come to terms with the fact that destroying an ancient forest with rare overlapping natural and cultural values would be an environmental crime,” Muirhead said in an email.

“In light of the strong recommendations from the Old Growth Review Panel to immediately cancel all blocks of ancient forests, it's time to make a clear announcement that the Dakota Bear Sanctuary is permanently protected.”