While Vancouver Coastal Health (VCH) is working in partnership with them, the Sunshine Coast COVID Physician Task Force is a homegrown phenomenon.
Mar 31, 2020 3:50 PM By: Sophie Woodrooffe 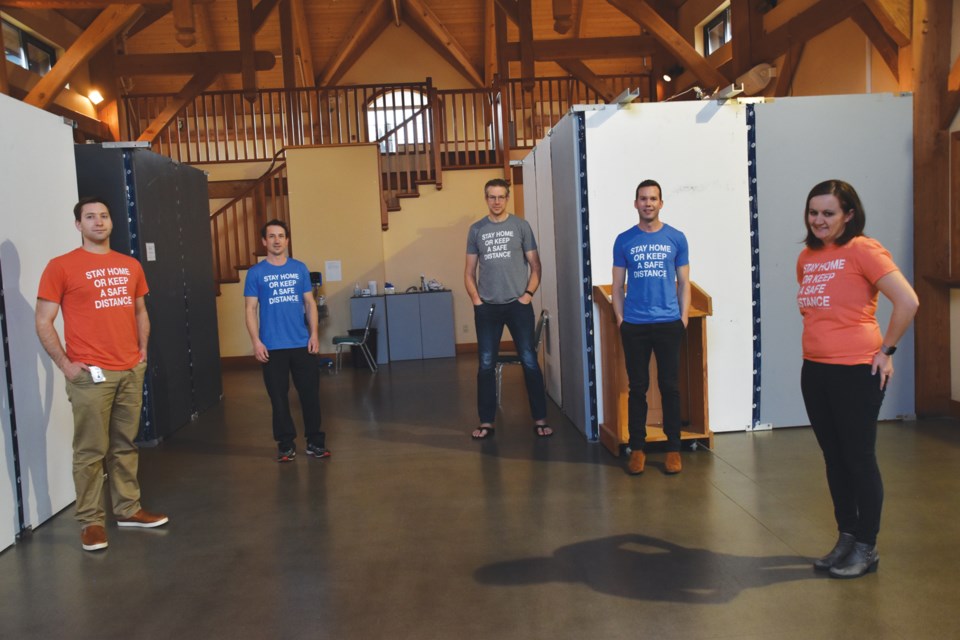 While Vancouver Coastal Health (VCH) is working in partnership with them, the Sunshine Coast COVID Physician Task Force is a homegrown phenomenon.

“There was a strong feeling amongst the physicians in this community of a need for a clear, organized response to the pandemic, as well as a desire from the community for clear communication and locally relevant information,” Dr. Jennifer Baxter told Coast Reporter through email.

Since March 15, the group of five physicians, all of whom practise at Sunshine Coast clinics, have been updating the community – including bulletins in Coast Reporter – on the status of COVID-19 cases on the Sunshine Coast. They have been transparent about the local health care system’s preparations and response and have provided guidance on public health measures to prevent an outbreak. They’ve gone so far as to warn people about the staggering blow of a worst-case scenario if people don’t follow those measures – a 90 per cent infection rate and hundreds of deaths.

The group has also mobilized on the ground. Last week, the task force announced the opening of a Respiratory Assessment Clinic on the Sunshine Coast, which was approved and constructed over four days, and which has been assessing about 40 people a day since it opened, according to VCH deputy chief medical health officer Dr. Mark Lysyshyn.

The Sechelt Hospital Medical Staff Association, which has as members the physicians, nurse practitioners and midwives who work at the hospital, launched the task force, according to Baxter, a physician at the Gibsons Medical Clinic who has international public health experience.

But unlike public health officers, who answer to VCH, these physicians are not employed by VCH, making the task force “truly … a response of your community’s physicians to the pandemic,” Baxter said.

While independent, they work closely with Sechelt Hospital and VCH, since their “efforts are directly connected with those of VCH at this time,” said Baxter.

This community isn’t the only one to see local doctors developing a local response. A similar group, the Powell River Physician COVID Steering Committee, has formed on the Upper Sunshine Coast.

And as with that rural steering committee, the task force’s mandate is to keep its focus on the community and its hospital’s needs, including advocating for resources

They are also advocating for point-of-care testing, which the group wants “to be made available as quickly as possible, to enhance our ability to identify cases and manage these appropriately,” Baxter said.

In a March 25 update, the task force cited a report by the Public Health Agency of Canada that found community transmission is responsible for nearly 50 per cent of confirmed cases in Canada, but that “with our current testing policies, we have no way of knowing if or how much community spread is happening on the Sunshine Coast.”

Current policy, according to the BC Centre for Disease Control, recommends testing people who are symptomatic and hospitalized or at risk of hospitalization, health care workers, long-term care facility residents or people who are part of an investigation of a cluster of cases or outbreak.

Lysyshyn said last Thursday that less than one per cent of the 339 cases confirmed at the time in the VCH area were on the Sunshine Coast, from Langdale to Lund.

While the Respiratory Assessment Clinic is where symptomatic people are being funnelled for evaluation, the task force doesn’t have a complete picture of who has been tested on the Sunshine Coast, because of how testing is organized. Health care workers who meet testing criteria are booked separately through a central phone line managed by the hospital and testing is done by nurses at the clinic. Because the patients aren’t booked directly through the respiratory clinic, “we simply do not have these numbers,” said Baxter. Members of the general public who meet the testing criteria established by provincial health officer Dr. Bonnie Henry are tested, but Baxter could not comment on how many have been tested.

As of March 28, Henry said testing for COVID-19 is mainly focused on the health-care system and identifying chains of transmission, rather than the broader public. Broader testing of healthy people with no symptoms won’t be a part of the province's strategy until B.C. reaches the “down side” of the curve in the virus’s spread, which has yet to happen, she said.

How the Sunshine Coast community will fare still depends on how diligently the community adheres to advice from Public Health, said Baxter. “If our containment efforts are effective, we hope fewer individuals will be affected by COVID-19.”

People who are able to call their family physician should do so for advice, and they will be referred to the clinic. Otherwise, anyone is welcome to call or email the clinic at 604-740-1252 or coastrespclinic@gmail.com.

– With files from the Canadian Press