After hearing two new reports on the state of the eelgrass beds in and around the harbour, Gibsons council will be revisiting amendments to the Recreational Water Lease Bylaw that have sat at second reading since December 2017. On Feb.
Feb 26, 2020 11:18 AM By: Sean Eckford 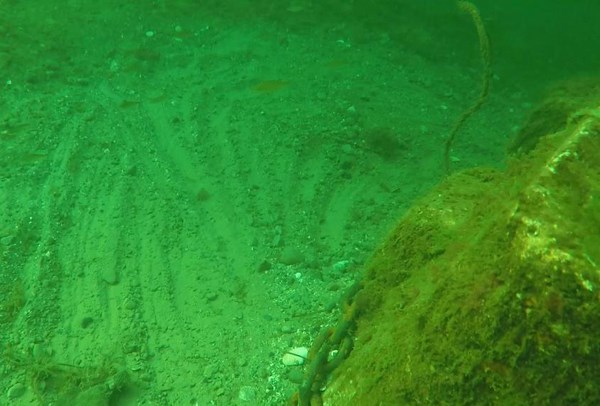 One of the images in a video created as part of Project Healthy Harbour showing scouring damage from a mooring buoy.Nicholas Sonntag Marine Education Centre

After hearing two new reports on the state of the eelgrass beds in and around the harbour, Gibsons council will be revisiting amendments to the Recreational Water Lease Bylaw that have sat at second reading since December 2017.

On Feb. 4, council received the results of the latest eelgrass survey conducted by Fiona Beaty of the Howe Sound Marine Reference Guide and Dianne Sanford of Moonstone Enterprises.

They found that while the eelgrass habitat around Gibsons is “significant” compared to other areas of Howe Sound, “eelgrass in the Town’s recreational water lease is in a stable but declining state of health relative to previous surveys in 2013 and 2004.”

On Feb. 18, council heard from Graham Starsage and Kevin Swoboda of the Nicholas Sonntag Marine Education Centre’s Project Healthy Harbour, an initiative the Town agreed to support in 2018 with an estimated $25,000 contribution over several phases.

Starsage and Swoboda reported on the first phase, a more detailed biophysical survey of the known eelgrass habitat east of the Gibsons Harbour breakwater conducted on Nov. 14 and 20, 2019.

The divers chose to focus on areas known to have “patchy, fragmented” eelgrass beds under a large group of mooring buoys.

He also said they identified a good diversity of species – over 40 – living in the eelgrass beds.

They showed video with examples of the scouring that prevents the eelgrass from growing properly, and the damage done to existing eelgrass by mooring chains dragging on the seabed.

Their conclusion, outlined in a written report, was, “Mooring buoys located near to or within the eelgrass habitat, in addition to anthropogenic debris, are having negative impacts on the eelgrass bed and contributing to habitat fragmentation.”

Starsage said they hope to continue working with the Town on future phases that would include similar surveys in the Armours Beach area and other parts of the zone covered by the Town’s recreational water lease, with the ultimate goal of having a long-term monitoring program in place.

Starsage also said the Marine Education Centre hopes to use the data collected as part of its ongoing public education programs.

“Right now the eelgrass beds are productive and have a lot of biodiversity, but will that always be the way as harbours expand and there’s increased human activity? When we teach people about the importance of taking care [of them] then they can make decisions,” said Starsage. “We’re trying to educate the community so they actively care for the health of our ocean.”

“One thing that we as a community have to acknowledge is that we have this recreational lease around the municipality, 300 metres from the shoreline, and within that lease we are responsible for the environmental health of the area,” he said. “So it’s very important for us to know what’s going on there and have a sense of what’s under the water, not just on top.”

Chief administrative officer Emanuel Machado said he expects to bring the Recreational Water Lease Bylaw back to council in April or early May, after council has heard from the Harbour Authority, “which will be important information because they interact with commercial operators and others on a regular basis.”

The amendments currently awaiting third reading would regulate barge anchoring and the placement of mooring buoys by replacing a general prohibition on moorage in areas where eelgrass could potentially grow with specific regulations outlining allowed sites for moorage.