Cleanup brings trash to surface in Gibsons, with derelict boats to come

Car batteries, tires and a bevy of barnacle-covered bottles, Styrofoam and “alarming amounts of rope” were among the items pulled from the Ocean as part of Gibsons’ Healthy Harbour Project. The Oct.
Oct 27, 2020 2:21 PM By: Sophie Woodrooffe 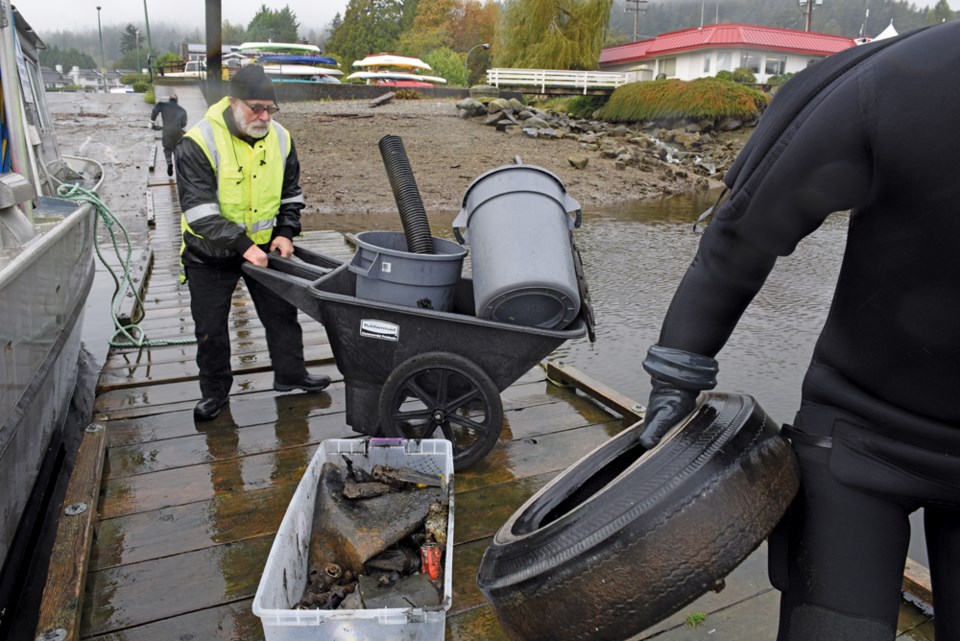 Car batteries, tires and a bevy of barnacle-covered bottles, Styrofoam and “alarming amounts of rope” were among the items pulled from the Ocean as part of Gibsons’ Healthy Harbour Project.

The Oct. 16 effort to remove trash hindering the growth of an eelgrass bed located east of the breakwater just outside Gibsons Marina was undertaken by 14 volunteers at the rainswept marina. Coast Bin Rentals donated a collection bin for the debris, and Gibsons Recycling and Waste Management also supported the operation.

“We are extremely grateful to Pacific Salmon Foundation, our volunteers, and the community for showing support in the initiative to support these critical natural assets which simultaneously support biodiversity and mitigate climate impacts,” Victoria Ritchie, animal care and education assistant with the Nicholas Sonntag Marine Education Centre, told Coast Reporter in an email.

Old rope, mooring lines and marine debris were highlighted as especially hazardous, but larger objects were also identified by the education centre’s divers, including derelict boats. Those were marked and the divers in partnership with SeaChange Marine Conservation Society are expected to extract them in the coming weeks using a crane.

Some unhealthy animals discovered in a rusted out cage were transported to the aquarium to recover from lacerations, said Ritchie.

Unlike seaweed, eelgrass can’t grow through debris, making it especially vulnerable, yet underwater meadows comprising the flowering aquatic plant are essential for an array of marine life, including salmon, crabs and rockfish.

The Town of Gibsons is supporting the initiative through a four-year partnership with the marine education centre that includes a $25,000 contribution. The Pacific Salmon Foundation provided $5,000 for the cleanup.

Surveys are also being conducted, and a report and recommendations for further restoration work is expected to be presented to council this winter. The education centre will also be pursuing more funding to continue its restoration work.