New measures anticipated to prevent non-essential travel onboard
Apr 22, 2021 10:48 AM By: Keili Bartlett 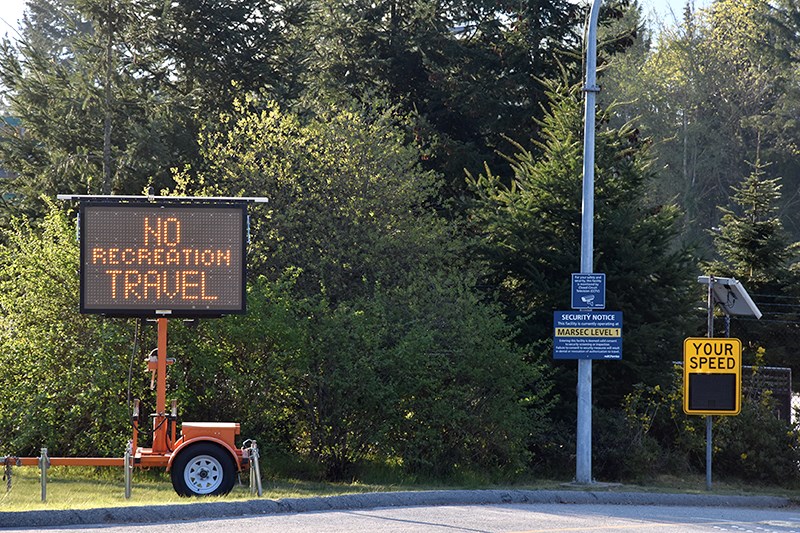 The message is already clear at BC Ferries’ Langdale terminal. Shy on details this week, BC Ferries confirmed it “will be making changes to discourage recreational and leisure travel.”Sophie Woodrooffe Photo

Not all will be welcomed aboard BC Ferries, as the company is in discussions with the province about how to reduce non-essential travel.

New travel restrictions were expected to be announced on Friday, April 23, after the Coast Reporter’s print deadline.

Premier John Horgan announced on April 19 that travel restrictions are coming under the Emergency Program Act to restrict people from leaving their health authority area. The measures, which are expected to include police roadblocks at strategic locations such as outside BC Ferries terminals, are set to extend through the May long weekend, May 24.

In a briefing to the press, Horgan said BC Ferries will stop accepting bookings for recreational vehicles, such as campers and trailers. BC Ferries, he said, will also be contacting passengers who have previously booked reservations to confirm whether their travel is essential and not for recreational or leisure purposes. Tourism operators will also not accept bookings for overnight stays for non-essential travel purposes from out of province or outside health regions.

BC Ferries executive director of public affairs, Deborah Marshall, told Coast Reporter via email that the company will update customers with more details once the pending travel restrictions order is finalized.

BC Ferries did not answer Coast Reporter’s questions about what kind of vehicles will be restricted and how many cancellations are anticipated for previously booked travel.

“In support of the pending Travel Restrictions Order announced by the Province, we will be making changes to discourage recreational and leisure travel, and we are currently working with the Province on the details,” Marshall said.

“Since November, we have been regularly advising customers to avoid non-essential travel. The health and safety of coastal B.C. communities and our employees is paramount. BC Ferries continues to provide service transporting people, goods and medical supplies to coastal BC communities for essential reasons.”