BC Ferries has committed to help fund the restoration of the Persephone, the boat that was at the centre of much of the action on CBC television’s The Beachcombers.
Dec 8, 2020 3:32 PM By: Sophie Woodrooffe 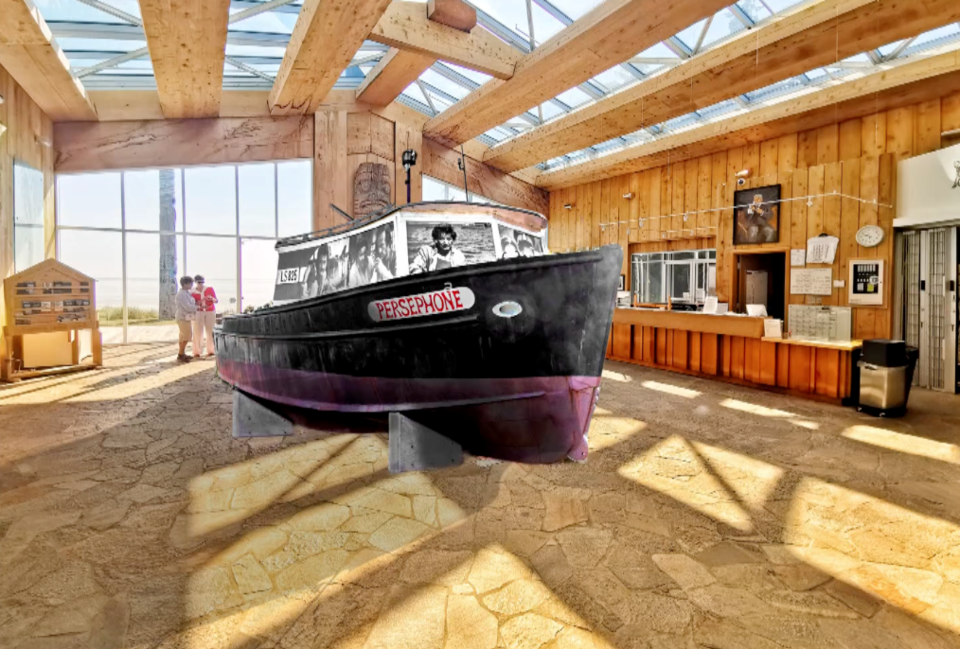 A conceptual image from the Town of Gibsons’ newly released promotional video of the Persephone housed in a permanent building.Screen shot

BC Ferries has committed to help fund the restoration of the Persephone, the boat that was at the centre of much of the action on CBC television’s The Beachcombers.

The boat remains a tourism draw, but hasn’t been adequately maintained at its current site in the centre of Gibsons Landing.

Dec. 12 marks the 30th anniversary of the airing of the final show in the long-running television drama, which was shot on the Sunshine Coast.

“BC Ferries is proud to make a donation to this project, as revitalizing the Persephone will have a lasting and positive impact for many years to come,” said Mark Collins, president and CEO of BC Ferries, in a Dec. 8 release.

“We understand the importance of supporting coastal community initiatives that encourage travel and economic development and we know the Persephone is a treasured landmark in the community.”

The Town of Gibsons also announced the release of a short video to promote the restoration project, which features Beachcomber luminaries and longtime Persephone fans.

The boat has been a popular attraction since 2007 when it was placed on a vacant lot at 263 Gower Point Rd. at the Five Corners intersection in lower Gibsons, according to the release.

“Every summer people line up to take their picture with the Persephone,” said Mayor Bill Beamish. “We certainly want that to continue for many years and are grateful to BC Ferries for helping us with the resurrection of this piece of history.”

Over the summer Gibsons Coun. David Croal, who worked on the show, had formed a special committee to look at options for restoring the Persephone, which has to be relocated because of a new development slated for the lot.

There is money set aside in the Town budget for removal and storage of the boat while it undergoes restoration and a new site is found, but a temporary location hasn’t been decided on yet.

One option might be to relocate it to Pioneer Park, but even then it would still need to be sheltered. “It’s a bit of a chicken and an egg,” said Croal. “It has to be restored prior to being in the housing.”

BC Ferries did not disclose the amount it is committing to the restoration project but Croal described it as “appreciable.” The Town received an estimate of $21,000 just to redo the superstructure in aluminum. The material used is expected to change if an enclosure is built for the boat. Provincial and federal grants are also being applied for to make up the rest of the cost.

As for a permanent location, Croal said he hopes to work with the Sunshine Coast Museum and Archives and Gibsons Public Library – which he said is planning an expansion – for a “coordinated effort.”

“We’re looking at working collaboratively to come up with a space that would work for the museum, library and a housing complex that would facilitate the boat being enclosed,” he said.

The release says the aim is to complete both the restoration and relocation by 2022, in time for the 50th anniversary of the debut of the show on CBC Television.

“The Persephone is very ‘Canadiana,’ very B.C.,” said Jackson Davies, who played Constable John Constable on the Beachcombers for 16 years. “She’s an iconic part of the film industry in Canada – and around the world.”