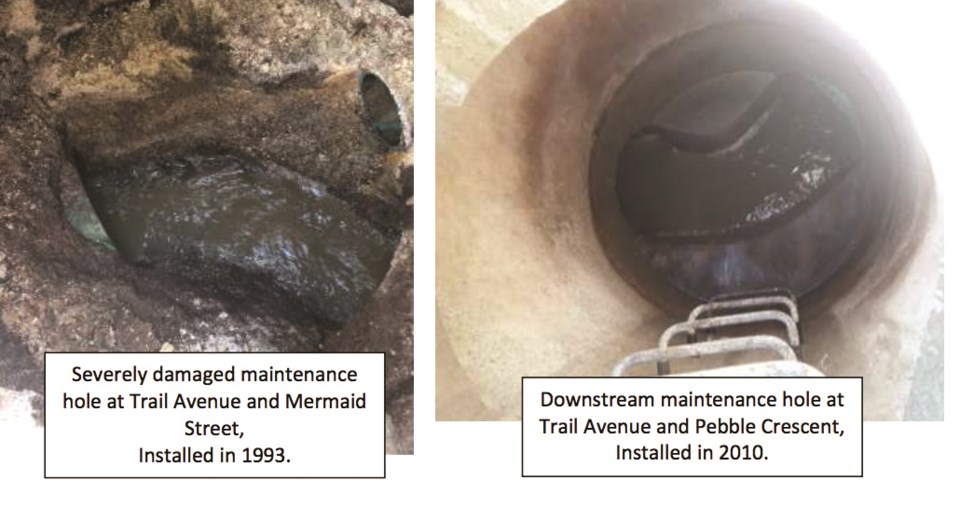 A failing maintenance hole (left) compared with a newer one installed in 2010.District of Sechelt Image

When sewage sludge is deprived of oxygen it releases a corrosive chemical compound that eats away at cement – a chemistry lesson that’s come with a price tag of $171,000 for the District of Sechelt.

Sechelt council has approved a special funding request for $171,000 to replace three failing sanitary sewer manholes on Trail Avenue between Mermaid and Medusa streets that were identified as at risk of collapse because of concrete so soft it resembles soil.

The work will be completed alongside ongoing roadwork on the avenue.

As part of their assessment, staff discovered “high concentrations of hydrogen sulphide,” while other manholes upstream of Trail Avenue and Mermaid Street “show similar signs of acid attack,” according to the Feb. 17 funding request report.

In total, the report said six holes “are experiencing severe spalling, due to both chemical and biological corrosion.” But because the remaining manholes are located outside the ongoing construction, those replacements could occur later, said staff.

Even still, the three-maintenance-hole replacement project will be significant, staff noted, because they service a main sanitary sewer trunk, downtown Sechelt and the West Sechelt community. A generator will be needed to divert the sanitary sewer flow overland.

As to the cause, the report indicated high concentrations of hydrogen sulphide occur when untreated effluent is heated during the summer when temperatures rise. If sludge accrues over time they “go septic” and release hydrogen sulphide.

The issues could be a result of “sanitary flow velocity dropping below the minimum self-clearing velocity,” said the report. One fix may be to flush the force mains and monitor the sanitary collection system.

The new holes would be lined with PVC to prevent corrosion.

Staff suggested using Gas Tax funding for the project, since the project can’t be funded by road development cost charges.

Staff said it appears not to be a district-wide issue.

Coun. Alton Toth described the degraded holes as “dirt pits” and asked if there was a risk to vehicles.

Staff said they have had that discussion with the Trail Avenue construction contractor and consultant and the holes should to be replaced as soon as possible.