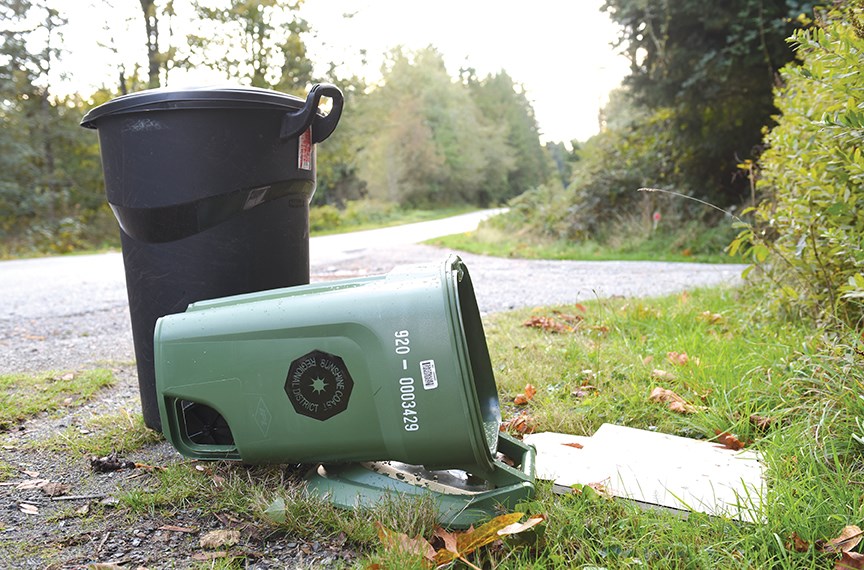 She attributed that success to the amount of food waste diverted from the Sechelt landfill – 9.7 tonnes – and to the low contamination rate of the collected waste.

“According to staff, it’s gone fantastic,” Pratt said in an Oct. 13 interview with Coast Reporter. “We have a very low contamination rate just in the first week alone and that’s just thanks to the community for being so educated about what needs to go in.”

Inorganic materials such as dryer lint, elastics and food stickers, as well as pet waste and yard waste and avocado pits, are among the items not allowed in the bins.

To check on compliance, SCRD staff and volunteers audited the contents of bins before they were picked up. Sechelt-based Salish Environmental Group, which was awarded a $205,800 contract to process the waste, was “very happy at the low contamination rate,” said Pratt.

As for wildlife – in at least one case, bears were reported to have been attracted to a bin after collection trucks took more than four hours to make the rounds – Pratt said staff are working with WildSafe BC and individuals on “mitigation methods.”

Pratt asked residents noticing an increase in wildlife to contact the regional district.

In a few weeks’ time, staff will also be assessing the collection routes and areas of higher bear activity to determine whether they should be modified to reduce the risk of wildlife encounters.

Andreas Tize, director for Roberts Creek, conceded the October rollout may have been “a bit of a strategic mistake,” in a recent blog post on his website, because of the increase in bear activity this time of year.

He also defended the program in a Letter to the Editor, arguing it doesn’t make a difference whether food is placed in garbage or green bins since bears are attracted to food smells.

Some people are still missing the 45-litre green bins allocated to each household as part of the program, but Pratt said that hitch was expected to be ironed out this week.

“It is a new program, this is only week two. Week one we’ve had incredible success and that’s thanks to the community,” she said.

Garbage collection fees were increased by 14 per cent in 2020 to incorporate the cost of the food waste program. Fees are now $175.85 per year and $148.25 for residences in mobile home parks.

Under the current program, residents do not have the option to opt-out and receive a lower fee. When asked whether the board would reconsider in the future, Pratt said, “I wouldn’t consider it off the table,” but the administrative costs “would be showing up in a different way to the same people.”

Now that the program is in place, directors are expected to consider a ban on food waste at the Sechelt landfill. An update is expected “in the weeks ahead,” said Pratt.